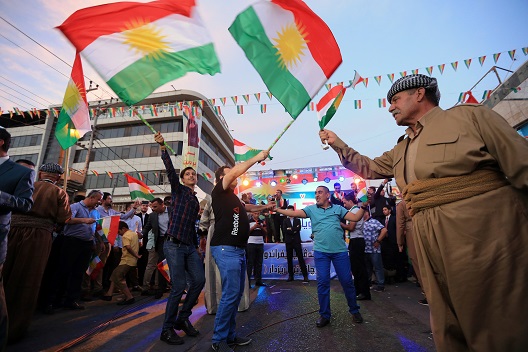 Monday’s referendum in Kurdistan resulted in a situation whereby all parties lack good options. To be sure, Masoud Barzani, the leader of Kurdistan Region Government (KRG), achieved some immediate political gains. He managed to mobilize his base by calling for and conducting the referendum despite international objections. In doing so, he strengthened his political stance and forced his Kurdish rivals to follow his leadership, which itself is legally dubious since his term was extended via a partisan agreement of ambiguous legal basis. Though the results are still not finalized, the vote was expected to give a clear ‘yes’ to the call for independence. Now comes the difficult question: what is Barzani going to do with the referendum and its outcome?

If he decides to use the momentum and unilaterally declare independence, he will invite retaliation and, possibly, military action from Baghdad, Ankara, and Tehran. Such a move will result in an open conflict in which the Kurds are outnumbered and not well-positioned. Realizing that, Barzani dismissed this option from the beginning by stating that the referendum will not automatically lead to independence but will principally express the will of the Kurdish people. But the alternative option is not very tempting, either. If he softens his tone and demands negotiation on independence, as he did in his first speech after the referendum, Barzani will face a reluctant Baghdad that has little interest in beginning a negotiation with him given the conditions set by what Baghdad saw as an “illegitimate referendum.” Barzani’s unilateral move has already forced Prime Minister Haider al-Abadi to harden his position, mainly in response to growing pressure from his Arab (primarily Shi’a) base to take a more assertive action against the Kurdish leadership. Therefore, the short term profits that Barzani secured by insisting on conducting the referendum might soon be undone by the heavy price of choosing between either turning the referendum into a unilateral declaration of independence, or else disregarding it as a symbolic exercise.

Abadi is not in a good position either. If he accepts the calls from Barzani or the United States and its partners to hold an unconditional negotiation, he will appear weak in front of Shi’a and Sunni hardliners, particularly his main rival and co-partisan, Nuri al-Maliki. Therefore, he is under pressure to take a tougher stand. Earlier, the parliament issued a decision to oblige him to move militarily in Kirkuk and other disputed areas. On referendum day, Abadi ordered KRG to hand over its airports and border points to the federal government, threatening to stop international flights to Erbil and Sulaimaniya if orders were not carried out. Yet, if he decides to take further measures against Kurdistan, especially if they entail military action, he might not be able to control the repercussions of a new round of violence. Unlike the war against ISIS in which Iraqi government was supported by international actors and by its population, an ethnic conflict in Kirkuk and disputed areas between two allies of the United States would be more complicated and less predictable. Such a confrontation will bolster the Shi’a paramilitary groups that Abadi was seeking to contain, by giving them a reason to further entrench themselves, particularly given their strength in the nearby disputed areas.

Understandably, Abadi is pursuing a calculated escalation in order to resist the pressures of Arab hardliners who call for more forcible action. But now Abadi and Barzani have something in common: the desire to avoid an open conflict. In this respect, it is worth noting that throughout the reciprocal rhetorical escalation, neither Abadi nor Barzani attacked the other personally. Yet, the lack of good options could be dangerous if it induced either party to pursue short-term gains and disregard the long-term consequences. In fact, this crisis is an outcome of Iraqi parties’ habit to prioritize the ephemeral and tactical at the expense of finding sustainable frameworks to address such disputes.

The need for Abadi and Barzani to avoid open conflict might be the point where a safe exit can be envisioned. In the short term, it could prove impossible to prevent Baghdad from taking measures that would ultimately give Abadi more leverage in dealing with Shi’a hardliners. But if those measures were not accompanied by preparations for talks and political compromise, they would only deepen the division and play into the hand of hardliners on both sides. Both the United States and the international community must understand Abadi’s position and support him in asserting the authority of the federal government, provided that his measures are not aimed at initiating hazardous military conflict. Improving his political stand in Baghdad will make it easier for Abadi to market any future negotiation to his base. Also, the United States and its partners should send Barzani and the Kurdish leadership a clear warning regarding the consequences of unilaterally declaring independence.

If Abadi took contained and well-calculated measures to counter the unilateral referendum in Kurdistan and disputed areas, it would help him politically without fully undermining Barzani and the Kurdish leadership. If they were accompanied by self-restraint and avoided radical actions (such as backing attempts by pro-Maliki camp to remove the president or initiating massive military operations against the Peshmerga), it will still be possible to envision a win-win situation. If this balance is achievable, the United States and its partners’ plan to sponsor negotiation between the two sides, based on a defined timetable and international arbitration and mediation, which was already offered to Barzani before referendum, can be put on the table again. After conducting the referendum, Barzani is more likely to be open to this alternative since he already stated that the referendum would be followed by negotiation. As for Abadi, his gauged counter-actions would prevent the hardliners from stealing the show and will make it easier for him to market or engage in meaningful negotiations before or after the next parliamentary election in 2018. This is not a perfect roadmap but, at the moment, it seems the less dangerous in a situation filled with bad options.