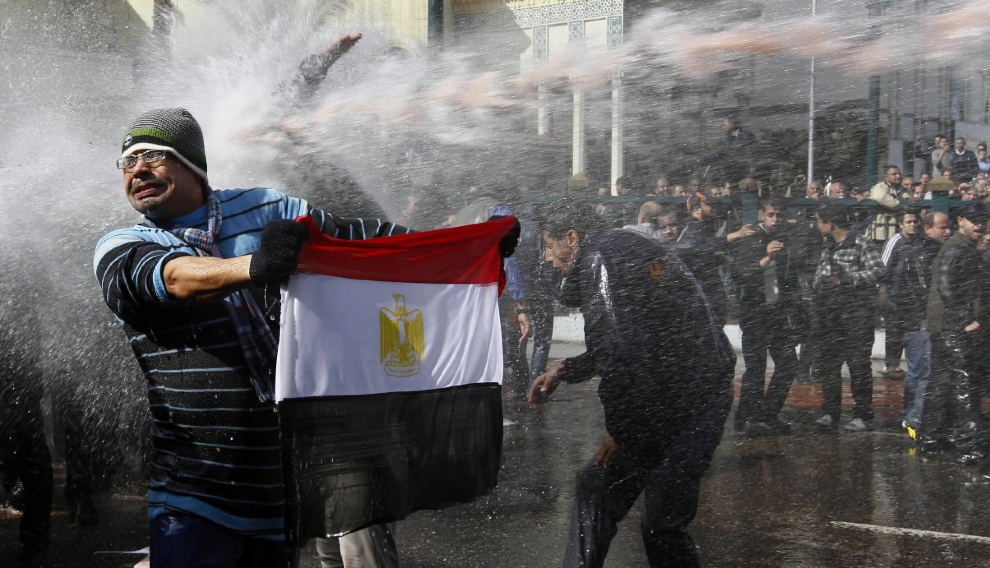 The Egyptian Ministry of Interior recently presented a number of draft laws it wishes to pass by presidential decree. The proposed drafts demonstrate that the ministry is neither willing nor ready to relinquish the tools of oppression that characterized the past few decades under the former regime.

Before the January 25 Revolution, the Ministry of the Interior (MOI) was a tool used mainly to protect the regime’s interests, neglecting its primary duty of maintaining security. The police force has grown accustomed to working in a state of emergency and an environment of legal loopholes which grants impunity to violators.

The January 25 Revolution, which began on Egypt’s national police holiday, rose up in retaliation against a tyrannical police state. Demonstrators – after toppling Mubarak – attacked several state security headquarters – buildings that embody the oppression of citizens. Thus, one of the most prominent demands of the revolution was for reform within the MOI, the restructuring of security apparatuses, and holding leadership accountable for gross violations of human rights.

The Supreme Council of the Armed Forces (SCAF), which assumed power after the revolution, was not willing to take these steps toward justice and refused to address demands for security reform. The elected parliament after the revolution was likewise unsympathetic, as peaceful political and social protests continued throughout Egypt.

As SCAF prepared to end the State of Emergency last May, the MOI presented a set of draft laws for parliamentary approval. The ministry alleged that these laws would help eliminate lax security, reduce street violence, and fill gaps previously addressed by emergency law. The dissolution of the People’s Council prevented these laws from passing, but the MOI has since readopted these draft laws, seeking to gain the Cabinet’s and president’s approval.

The drafts indicate that the MOI has not fully realized the connection between human rights violations by police officers, their use of excessive force, the suppression of public and private freedoms, and the outbreak of protests on the 25th of January that quickly evolved into a revolution.

Some of the recent amendments call for the return of old, ill-reputed laws that were previously ruled unconstitutional. For example, the MOI borrows from a law that allowed police to detain any person based on mere suspicion that they committed a crime. Actions criminalized by this law are wide in range and imprecise in a way that has come to characterize Egypt’s ability to restrict the freedom of citizens rather than to protect them.

The MOI also presented an amendment to law No. 34 from 2011 criminalizing strikes and the destruction of public property, a law originally imposed by SCAF in response to peaceful worker and student protests.

Another draft law restricts freedom of expression and the right to peaceful demonstration. The law would enable security personnel to break up peaceful protests, arrest citizens and impose heavy fines on those who call for or participate in demonstrations, and those who stand in solidarity with them. The procedures introduced by the MOI for regulating demonstrations are also excessive and arbitrary, and would abolish the right to demonstrate, threatening violators with severe punishments.

Not content with its draft law to suppress the right to demonstrate, the MOI now seeks to amend law No. 113 of 2008 which protects the sanctity of places of worship. Whether at the beginning of the revolution, on its first anniversary, or other occasions, many peaceful protests have started in mosques and churches. These new amendments would increase prison sentences and double the fine for demonstrating inside places of worship.

It appears that the MOI is not concerned with police officers returning to their duties of ensuring security. Instead, it has concerned itself with providing personnel with added immunity. The ministry’s proposed amendments also increase detention and double fines for those who assault or insult state employees or security personnel. This means, for example, that any reaction from citizens if assaulted by police while participating in a peaceful demonstration would be considered a crime punishable by the law for the assaulted, while protecting the assailant.

The MOI also created an additional article in the Penal Code criminalizing demonstrations and protests by way of criminalizing actions that lead to disruptions in the flow of traffic “with the goal of affecting the decisions of any state institutions or for the purpose of preventing their ability to carry out their constitutional and legal duties.”

Thus all peaceful protests, worker strikes, and all other strikes demanding social justice would become criminal acts. The amendments grant police officers license to deal with protestors and demonstrators using excessive force, just as it permits them to arrest any citizen under suspicion. Remarkably, the ministry’s proposals show no concern for mending the deteriorated relationship between citizens and the police, typically characterized by suspicions that the police seek vengeance for the revolution.

These changes also point to the fact that the security leadership in Egypt does not realize that maintaining peace and stability in Egyptian society cannot be achieved alongside policies that restrict the full enjoyment of their rights and basic freedoms as provided by constitutional principles and international human rights agreements signed by Egypt.

These amendments are unnecessary as the current legislative foundation is sufficient to face various dangers that threaten safety in society. What is needed is an entirely different kind of revision that would eliminate binding punishments, and remove articles that criminalize acts that are not criminalized by international law, bringing Egypt in line with international human rights standards.

The MOI’s proposals are an attempt to revitalize old tools of oppression that previously had no legal form but were protected by the state of emergency. They also contribute to the codification of legal oppression and list extraordinary justifications – otherwise unacceptable even in a state of emergency – in the normal legal system. It is precisely this that elicits anxiety vis-à-vis the MOI’s desire to create a permanent alternative to emergency law.

The Ministry’s draft laws are of particular importance because they are a test of President Morsi’s stances on human rights and general freedoms. The passage of these laws and putting them into force will not come except through their issuance by the president, who holds executive and legislative power.

Security forces have recently resorted to breaking up peaceful sit-ins by force, coinciding with the president’s unsympathetic declarations toward the rising occurrence of strikes and sit-ins. This has caused anxiety about the way in which the president’s intentions might pave the way for the MOI to reclaim its authoritarian tools lost when the state of emergency ended.

There exists the expectation that a government formed by a democratically elected president will prioritize democratic transition, realize social justice, and respect human rights. However, what has been proposed by the government through the MOI indicates that it is prepared to oppress rather than pursue a transition to democracy.

So the choice before the president is to either reject these laws, while simultaneously taking decisions and procedures to restructure the Ministry of the Interior, or to put these proposals into law and begin a new phase of rebuilding the police state that was the very target of the January 25th revolution.