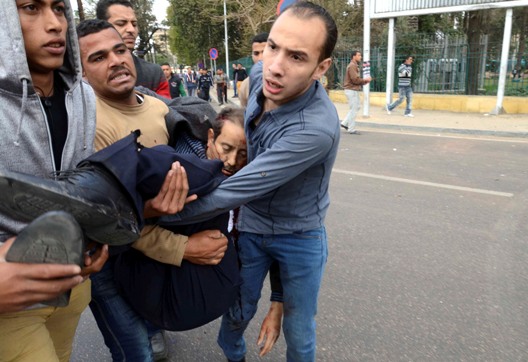 On Wednesday, three bombs went off at Cairo University, killing at least two, among them a police officer, and wounding five. The consecutive blasts were detonated remotely. Militant group Ajnad Misr (Soldiers of Egypt) claimed responsibility for the blast in a statement shared on Twitter, as pointed out by the Long War Journal’s David Barnett.

Ajnad Misr, a relatively new militant group, said the attack came in response to the arrest and treatment of women by Egypt’s authorities. Ajnad Misr emerged in January claiming responsibility for a bomb attack on a police checkpoint in Giza that injured six, along with another six attacks in January.

Shortly before noon, the first two bombs, planted in trees near a police guard post, took the life of Brigadier-General Tarek al-Mergawi, and wounded seven others.  Giza deputy security chief Abdel Raouf al-Sir was among the wounded. The third blast, which hit about an hour later, took the life of another person, according to Reuters, and wounded six.

Ahram Online reports that a forensic report showed that a nail bomb was responsible for al-Mergawi’s death.

What is said to be the moment of the first explosions was caught on video by Youm7:

RT shared this video on YouTube saying it is the moment that the second blast hit:

A crew filming after the first two blasts, shows what appears to be the moment the third bomb detonated:

doned and evacuated the university, as the search or more devices continued. A fourth bomb was defused in the vicinity of the university, while another two bombs were found near the faculty of commerce.

Fifteen students were arrested in the wake of the bombings.

Cairo has seen several violent attacks in the wake of former president Mohamed Morsi’s ouster. The Sinai militant group, Ansar Bayt al-Maqdis, has claimed responsibility for most of them, including an assassination attempt on the interior minister last September.

Reactions after the Blasts

Cairo University head Gaber Nassar said that there is no plan for the university to delay the academic semester following the blasts. He also expressed his support for an anti-terrorism law, saying, “Dealing firmly with the lawless students, expelling them and denying them access to the campus, is not enough. There has to be an anti-terrorism law.”

The Students Against the Coup (SAC), a pro-Mohamed Morsi student movement denied any involvement in the blast, cancelling a protest planned for that afternoon. SAC spokesperson Ahmed Ghonim said in a statement posted on Facebook that the explosion took place half an hour before a planned student protest. He accused authorities of orchestrating the blast in order to place the blame for the attack on the student movement.

In a second statement, Ghonim condemned the bombings, holding authorities responsible for the loss of life.

Hamdeen Sabbahi, head of the Popular Current and presidential hopeful, tweeted: “The targeting of Cairo University, the beacon of Egypt’s renaissance, is new proof of the depravity, backwardness, and blood-thirstiness of terrorism.”

The US Embassy in Cairo issued a statement in the wake of the attack:

“The US Embassy condemns in the strongest terms the terrorist attacks near Cairo University earlier today, April 2, 2014, which killed at least one individual and injured many more.  As we have said before, there is absolutely no justification for such cowardly attacks.  The Embassy extends its condolences to the families and friends of those who were killed and hopes for the swift and full recovery of those injured.”

In a series of tweets, Amr Darrag, a leading member of the Muslim Brotherhood’s Freedom and Justice Party condemned the attacks, describing it as a “failure” on the part of the interior ministry to “protect its sons.”

He also said that the student movement will remain peaceful, and supported the SAC’s statement of condemnation. In a third tweet, Darrag denied the involvement of any Islamist movements, saying “Islam is innocent of these attacks.”

Image: People carry the body of a police officer who was killed in explosions near Cairo University April 2, 2014. Another explosion was heard at Cairo University on Wednesday after a twin bombing killed the police brigadier-general, a Reuters witness said. REUTERS/Al Youm Al Saabi Newspaper