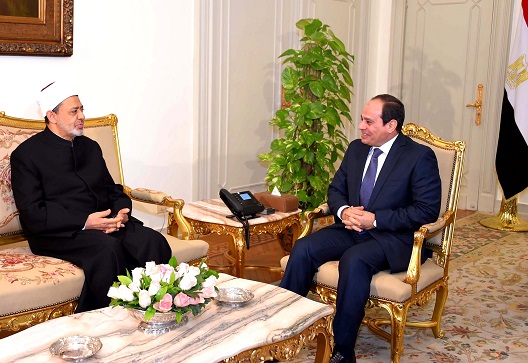 Tensions between Egypt’s religious leadership and its political leadership—represented by the Grand Imam of al-Azhar, Ahmed el-Tayeb, and Egypt’s President respectively—have reached a point where they can no longer be concealed. The underlying disagreement has become public, and Egyptian President Abdel Fattah el-Sisi has raised this issue in his public speeches, the most recent of which dealt with verbal divorce, to the point where Sisi told el-Tayeb, “you’ve exhausted me, honorable Imam.”
The Council of Senior Scholars, which is headed by the Sheikh of al-Azhar, rejected Sisi’s call for divorce to be documented in order for it to be recognized. As further evidence of this disagreement, the al-Azhar Sheikh addressed the issue of democracy and human rights at a conference on renewing religious discourse in November 2015, a time when Sisi’s regime was facing harsh criticism of its human rights practices.
Rather than concentrating on flashpoint issues the media has focused on, we should turn to several of the challenges that created the current tension, to gain a deeper and more comprehensive understanding of the dispute. These can be summed up in three primary factors.

Violating the Conditionality of Support

The context of Sisi’s July 3, 2013 statement announcing the removal of former president Mohamed Morsi is revealing. Sisi gave the speech surrounded by numerous prominent national figures, reflecting a consensus among major stakeholders. El-Tayeb’s presence was doubly important, given his religious position, at a moment of confrontation with the Muslim Brotherhood, which used religion as a means of rallying, mobilizing, and building legitimacy. It was considered an explicit declaration of which side the Sheikh of al-Azhar had taken in this conflict—yet this should be re-examined.

Ahmed el-Tayeb released his own statement, saying that al-Azhar’s only reason for participating in this scene was to prevent greater harm by accepting lesser harm, meaning preventing bloodshed by accepting Morsi’s ouster and holding early elections. This statement was tantamount to al-Azhar’s conditions for lending its support in these new circumstances, and absolving itself from blame if the conditions covered in the statement were violated. Such an interpretation is supported by a tone of escalation in subsequent statements as the new regime actions were contrary to its statement, including dispersing the sit-in at Rabaa Square. This moment was a clear divide between al-Azhar and the regime.

On July 5, 2013, el-Tayeb released an additional audio recording, in which he affirmed that “religion and nationalism are innocent of any bloodshed,” and warned that the armed forces were deviating from their function. In an audio recording about the July 8, 2013 Republican Guard’s violent dispersal protestors in front of its headquarters, the Sheikh of al-Azhar called for the formation of a commission of inquiry into these events, for specific details about the transitional period to be released, and for all detainees to be freed. El-Tayeb repeated his criticism in a statement after the sit-ins at Rabaa al-Adawiya and al-Nahda Squares were dispersed.

The Conflict over Religion

These efforts created another dispute between al-Azhar and the regime. Here, analysis goes beyond the personal level for these religious and political leaders, to instead look at structural issues underlying the conflict.

After the January 25 revolution, the growing role of religious currents led to increased demands for al-Azhar to have a greater political and media role, to act as a religious authority in the public sphere. The state supported this role, as did a section of intellectuals and the secular elite, some of whom signed on to the documents that al-Azhar released after the revolution—particularly four documents about Egypt’s future, the renunciation of violence, freedoms, and women’s rights. Al-Azhar’s position on these issues was closer to moderate Islamic voices.

Al-Azhar managed to translate this role into institutional gains. Article 4 of the 2012 constitution, and subsequently Article 7 of the 2013 constitution, provided it with a constitutional cover for its independence from Egypt’s political authority. Al-Azhar became the entity tasked with interpreting religion, and the Sheikh of al-Azhar had immunity from being ousted; the Council of Senior Scholars elects him and he enjoys government funding. These constitutional privileges gave al-Azhar institutional power in its relationship with political authority in a political environment that has been characterized by divisions within state institutions themselves. In light of these institutional gains, Sisi put more public pressure on al-Azhar on the subject of renewing religious discourse and amending its curricula. However, al-Azhar refused to fully adopt the government’s vision of these issues.

For the regime, its only alternative was to support religious figures who were loyal to it and had ties to al-Azhar, even if they did not have leadership positions within the regime. Ali Gomaa was a top alternative because he is a religious scholar, and supervises the operations of several charitable organizations with a broad range of activities. The most famous among these are Misr al-Kheir and the Egyptian Food Bank. He also manages certain Brotherhood charitable organizations seized by the regime, such as the Islamic Medical Association (IMA). After the Muslim Brotherhood was overthrown, Gomaa established a group called “Egypt Is My Country.” Gomaa was the honorary president of the group, which aimed to provide Sisi with political backing, and prepare candidates to run in parliamentary elections. He also participated in the “Stay Beautiful” campaign, which encouraged Sisi to run in the presidential elections.

Ali Gomaa’s quick rise could only be stopped by the Sheikh of al-Azhar. El-Tayeb called for a meeting of the Council of Senior Scholars, and for a decree to be issued banning all members of the committee Gomaa belonged to from engaging in political activities. This forced him to resign from Egypt Is My Country. The relative decline of Gomaa’s role came in contrast to the rise of Gomaa’s former student Usama al-Azhari, who was appointed as an advisor to Sisi, and whom the President appointed as a member of parliament.

Generally, there is a stark division between the institution of al-Azhar and certain religious figures allied with the regime, including the Minister of Awqaf (Religious Endowments) and Dar al-Ifta. The President has continuously used these parties in the dispute with al-Azhar, upsetting the relationship between the Ministry of Awqaf and al-Azhar, and media campaigns directed against the latter, in which Usama al-Azhari himself participated.

Traditional powers are one of the main social bases of authority in Egypt. This relationship tends to run through official institutions, and al-Azhar is no exception. It has deeply penetrated local communities in areas across Egypt through thousands of al-Azhar institutes and several branches of al-Azhar University. This is in addition to the huge social role that al-Azhar plays through the religious endowments that were affiliated with it until it was separated from them during the Nasser era. Thus, al-Azhar constitutes a social stronghold that represents traditional thinking.

There is mutual animosity between Sisi and traditional political forces. Since he first announced his candidacy for the presidential elections, he has been open about his opposition to the rules of Egypt’s National Democratic Party, repeatedly saying prior to being elected that “he owes nothing to anyone, except God and Egyptians,” and that he was not a return to the figures of Mubarak’s state.

Because of this antagonism, most traditional political powers boycotted the elections as a way to collectively punish Sisi. This was evident in how empty polling booths were, something that traditional powers tried to highlight in the media to undermine the prevailing image at the time of Sisi’s overwhelming popularity. The Sheikh of al-Azhar’s family was a part this, as media personality Tawfik Okasha pointed out when he spoke of the el-Tayeb family lack of support for Sisi in the elections.

The flashpoint issues that are raised in the media are manifestations of a deeper dispute between al-Azhar and the current government that predates el-Tayeb and Sisi. The overthrow of the Muslim Brotherhood was not a moment of alliance between al-Azhar and the new regime, so much as it was a turning point in this dispute as religious leaders and officials in the nascent regime contend over how to manage state affairs after the overthrow of the Muslim Brotherhood.