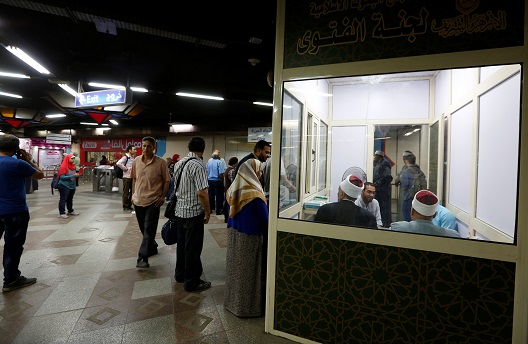 The subject of extremist Islamism, and refuting it, remains a live one—and it is unlikely that it will change anytime soon. If there is ever a comprehensive and thorough response to extremist Islamism, it will have to take on board the need to deconstruct religious arguments from within religion.

Pre-eminent among institutions that are called upon to engage in that ‘battle of ideas’ is Al-Azhar University and the wider Al-Azhar religious network of organizations in Egypt—the most famous Muslim religious establishment in the world. Others, raise Al-Azhar as an institution that can help bring Islam into a meaningful discussion around human rights and liberalism.

But in recent times, different questions have been raised about this institution—both within Egypt and abroad. We asked non-resident senior fellow, Dr H.A. Hellyer, who has written widely on Arab politics and Islam, a few common questions about the Azhar, and how it fits into the wider discussion around Islam and society across the region.

Dr H. A. Hellyer is a non-resident senior fellow at the Rafik Hariri Center for the Middle East at the Atlantic Council and a visiting professor at the Centre for the Advanced Study of Islam, Science and Civilisation in Malaysia. He is also leading the Rafik Hariri Centre’s Religion and Human Rights project at the Atlantic Council, which examines the engagement between Islam and the human rights discourse, supported by the Carnegie Corporation in New York.

There has been rather extensive criticism of the Al-Azhar for not declaring members of the so-called ‘Islamic State’ (ISIS) as apostates. Why doesn’t the Al-Azhar simply do that? Wouldn’t it help in countering extremism?

Al-Azhar, at its core, is a Sunni institution that at least purports to respect the normative historical approach of Sunni Islam. When it comes to declaring specific individuals as outside the fold of Islam, following they are actually being recognised as Muslims, Sunni Islam is not particularly malleable. Indeed, this is one of the main criticisms that mainstream Sunni religious authorities have of ISIS (and also many Salafi preachers)—that ISIS and their likes are far too liberal about declaring this Muslim or that Muslim to be outside of the fold. It’s actually extremely difficult, under classical Islamic jurisprudence, to do that—and that’s a plus, not a minus. Sunni Islam was historically fairly ecumenical, both within and without. Particularly against the backdrop of sectarianism being such a destructive force in the region, that’s something we should favor, not reject.

It’s frankly not very clear as to why Al-Azhar declaring members of ISIS to be non-Muslims would be particularly helpful. Mainstream Islamic authorities across the board have declared ISIS ideology to be non-Islamic—so the battle of ideas part is addressed. One could—and should—argue that the deconstruction of that ideology ought to be done a lot more methodologically and thoroughly—but that’s a capacity issue. You need genuine experts to do that sort of work. But when it comes to declaring members of ISIS as non-Muslims—it’s not remotely needed. Muslims recognise that Muslims can do bad things, and should be fought, imprisoned, and so on—even executed, in countries that have capital punishment.

Different non-Azhari figures in Egypt have declared that the Al-Azhar needs extensive curricular reform, and in response the Al-Azhar is deeply antagonistic. Why is the Al-Azhar so opposed?

There is a widely-held feeling among the Muslim religious establishment at large—and not simply the Azhari establishment—that religious authority ought to be restricted to religious experts. In that regard, they’re not really talking about a sacramental cleric class, or a hierarchical ecclesiastical authority—from their perspective, they’re talking about expertise and proficiency. And very often, the harsh rejection of certain stances and positions emanates from precisely that—an identification of a lack of expertise. In their universe, it’s really quite simple: you wouldn’t ask a plumber to do a caesarean section, and you wouldn’t ask a psychologist to build a bridge. Hence, why rely on people who haven’t gone through a rigorous seminary to pontificate about religion? It’s an objection they feel strongly about.

Does that mean there isn’t a point to be made legitimately about curricular reform?

Not really. Curricular reform is a crucial part of the issue—but a fundamental issue in Egyptian religious education is the same one that faces Egyptian education at large. Standards have dropped tremendously over the decades—and I think this is particularly the case when it comes to religious education. Now, that isn’t altogether surprising. Many post-colonial Muslim states—and Egypt is no exception—have structural educational realities that encourage the academically adept to go towards subjects other than religion. That is clear from how university access exams are drawn up. That is going to have a knock-on effect on the student body—and, eventually, the faculty, who will be drawn from the graduate pool over time.

So, does the Egyptian president then have a point about ‘revolutionising religious discourse?’

At the same time, there is surely going to be a difference between what the bulk of the religious establishment is after when they talk about updating religious discourse and what a former military officer who has state power in mind is after.

Does this mean, in essence, we should rely on the Al-Azhar to engage in the ‘battle of ideas’?

There are really three main necessary components when it comes to the battle of ideas. The first is to have a thoroughly established alternative set of ideas at play—alternative to the extremism we’re supposedly battling. The second is to have the technical capacity to promote those ideas in an effective fashion. And the third is to ensure credibility with the target audience.

The second issue around technical capacities is rather difficult—you’ve seen different governments in Europe, North America and in Muslim-majority countries try to tackle that issue. It isn’t easy—and the extremists are far better at it, thus far. Al-Azhar has tremendous challenges in that regard.

And in this regard, many governments simply shoot themselves in the foot—they want religious figures to speak out against wanton and vigilante violence perpetrated by extremists, but they muzzle them otherwise. If the ‘counter’ space cannot count among its ranks religious figures that are also clearly and openly critical of the state (wherever that might happen to be) when it engages in abuses, then the ‘counter’ space will simply be deemed as irrelevant by most of, if not all, the target audience.

Dr H. A. Hellyer is a non-resident senior fellow at the Rafik Hariri Center for the Middle East at the Atlantic Council. He is the author of “A Revolution Undone: Egypt’s Road Beyond Revolt”, “Muslims of Europe: the ‘Other’ Europeans”, and a forthcoming work on a contemporary Sufi order in Mecca under a Salafi establishment. A visiting professor at the Centre for the Advanced Study of Islam, Science and Civilisation in Malaysia, he is also leading the Rafik Hariri Centre’s Religion and Human Rights project at the Atlantic Council, which examines the engagement between Islam and the human rights discourse, supported by the Carnegie Corporation in New York.