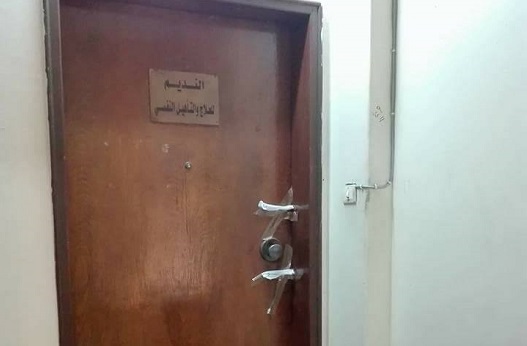 On Thursday, February 9th, the doctors and lawyers working in the Al-Nadeem Center for the Rehabilitation of Torture Victims found that “a huge police force” had sealed their center and clinic with red wax and took their porter to the police station for questioning, the co-founders said in a statement.  Al-Nadeem is an NGO founded in 1993 that provides legal and psychological support for victims of violence and torture, including domestic and prison violence. The center is facing heavy harassment from Egyptian authorities since the Health Ministry issued a closure order and closed the center’s clinic for the first time in February 2016 on grounds that it was “breaching its license conditions.”

Since then, Al-Nadeem’s co-founders have filed a case against the Health Ministry, arguing they have not violated any laws and that their documents and licenses are in place. The center’s lawyers are still awaiting a verdict on this particular case as court sessions have been regularly postponed. “It’s a bit early to know exactly what we will do but for now we have filed a complaint to the prosecution,” co-founder Dr. Magda Adly told MENASource.

“This closure violates even the Health Ministry’s order because the clinic takes up only one apartment but they closed three [Nadeem-owned] apartments,” Dr. Adly said adding, “The other two apartments are responsible for other activities and administrative work unrelated to the clinic.”

Egyptian authorities previously closed Al-Nadeem in June 2004, the clinic reopened soon after the doctors filed a complaint and spoke in front of prosecution. More recently, in the context of a large scale crackdown on civil society in Egypt, the co-founders of the center were subjected to travel bans, asset freezes, and closure attempts. In November 2016, authorities ordered the Central Bank of Egypt to freeze the center’s assets and later the same month banned  co-founder Dr. Aida Seif Al-Dawla from traveling to a conference on the rehabilitation of victims of violence and torture. Authorities later lifted the asset freeze.

“The interpretation for this sort of harassment has been obvious since last year,” Dr. Adly explained, “The health ministry saying ‘well you have a page on Facebook that posts about torture and puts the ministry of interior in a bad light.’”

“They won’t admit that this is a politicized decision,” she told MENASource. The Health Ministry’s spokesperson Khaled Megahed had said at the time that Al-Nadeem had “changed its activities from being a rehabilitation center to being a center for human rights.” The Al-Nadeem center regularly releases reports documenting torture accounts, enforced disappearances, extrajudicial killings, and other forms of violence perpetuated by Egyptian security forces. “As doctors we believe that we should protect citizens from torture and not just its effects or its aftermath,” Dr. Adly told MENASource.

“We also believe in publicizing and documenting cases of torture, the complaints of citizens, and of cases of forced disappearances as its victims are subjected to torture,” she added. “And this makes the Ministry of Interior angry, because the Ministry of Interior does not think it is wrong to torture people. It thinks it is wrong to publicize that this torture takes place.” Staff at Al-Nadeem emphasized that while their goals in countering all forms of violence are the same, the Al-Nadeem clinic and the center are two different entities.

Dr. Seif Al-Dawla explained to MENASource that the organization Al-Nadeem was officially registered as an NGO and the clinic is only one of the organization’s branches. The clinic was registered with the Doctor’s Syndicate and the Health Ministry “to prove that we are certified doctors,” Dr. Seif Al-Dawla said. “The [human rights] reports that bother them so much, and which we will continue to issue, are not produced by the clinic. We’ve explained that [to them] before.”

Dr. Seif Al-Dawla also placed the closure within the wider clampdown on civil society and dissent in the country. “Everything is getting closed down, even [psychological] treatment. The regime cannot handle anything that directly or indirectly points to the fact that there is torture.”

“If there is a clinic that treats torture victims, it means that torture exists, it means that Egyptian citizens have a real need for it. So they close it down. There cannot be anything hinting from close or from far that there are violations,” Dr. Seif Al-Dawla told MENASource.

Najia Bounaim, the Deputy Director of Amnesty International’s Tunis regional office said after the shutdown that, “This is a blatant attempt by the authorities to punish the Al-Nadeem Center for its work supporting victims of torture and other ill-treatment and families of people subjected to enforced disappearances.”

A number of other figures and organizations expressed their solidarity following the closure, including the International Rehabilitation Council for Torture Victims and approximately 150 organizations linked to it, the Cairo Institute for Human Rights, the Arab Network for Human Rights, and more. Activists also supported Al-Nadeem on social media. One torture victim, Nour Khalil, wrote that after his detention and torture in 2014 “the only place that helped me to overcome [the experience] was Al-Nadeem.”

According to Dr. Seif Al-Dawla, “[Al-Nadeem] is the only center that offers rehabilitation for torture victims, but we will continue providing this service even if they’ve closed the center.” Both she and Dr. Adly said that the Al-Nadeem doctors have volunteered their private phone numbers online for clients who need them. “As long as there’s a need and we’re free [from detention] we will be here.” Dr. Seif Al-Dawla added.

Jihad Abaza  is a freelance journalist and anthropologist in Egypt.