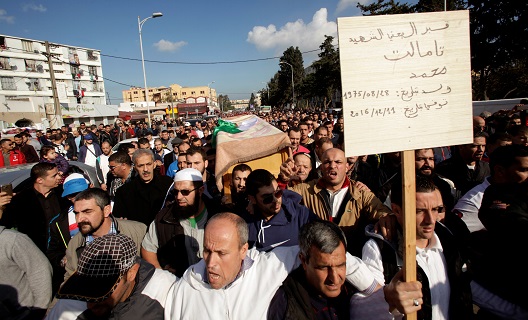 Algeria is facing change in several interrelated areas. Upcoming parliamentary elections on May 5 will therefore take place in an atmosphere of rising uncertainty. Coupled with the fact that those in power realize that change is needed, and have taken steps to diversify the economy and adopt constitutional amendments in recent years, means the elections might result in changes in parliament.

First, there are economic challenges. Declining oil prices have begun forcing economic planners to find strategies for moving away from the country’s dependence on hydrocarbon revenues. Hydrocarbons account for ninety-four percent of Algerian exports and over sixty percent of state revenue. For the last several years, it has been drawing down its foreign currency reserves, and some say these reserves are expected to run out by the end of 2018. Reluctant to implement the necessary austerity measures, which come at the cost of social unrest, the government has been using other methods to avert a balance of payments crisis including delaying infrastructure projects. The absence of a clear strategy that will allow the state to avoid a fiscal crisis, without abandoning Algeria’s socialist roots, thus represents a major source of uncertainty.

Second, there is the question of who will succeed the aging and ailing president, Abdelaziz Bouteflika. The current government is preparing for a transition, and pro-Bouteflika groups are considering his brother, Saïd, as the successor, but many Algerians, including influential decision-makers, oppose him. There is tension between the president and his allies and the army and the intelligence forces and began from the beginning of Bouteflika’s presidency. Recent attempts to control the succession may backfire if the security leadership decides to block the choice by favoring another candidate from the ruling party or, worse, if the army reverts to more drastic measures, including a coup. Bouteflika himself may run for a fifth term, as long as his health permits, for the presidential elections in 2019; there is also speculation that others close to him, such as the Army Chief of Staff and Deputy Minister of Defense Ahmed Gaïd Salah or Prime Minister Abdelmalek Sellal, may compete with Saïd for the position. Thus, the timing, direction, and level of destabilization of the impending leadership change may all cause uncertainty.

Finally, the country continues to face social unrest and security concerns. Protests in cities occur frequently and regularly including earlier this year as a result of announced subsidy cuts. Protests and militant extremist attacks are also frequent in the south. While observers believe the risk of large-scale unrest is low, due to the recent memory of civil war in the 1990s and the strength of the army, the destabilization set off by recent protests in other Arab countries still worries the Algerian regime. Furthermore, the legitimacy of the Bouteflika regime is already in jeopardy: he is widely credited with having restored stability after the decade-long civil war, but the generation of youth with no memory of that war is growing. His manoeuvres to amend the previous constitution to serve a fourth term also diminished his credibility. Moreover, if the army were to step in to quell protests, this would upset the civilian-military balance the president worked to achieve. For all these reasons, the government is taking extra care to avoid significant protests.

What difference, if any, will the upcoming parliamentary elections make in the government’s ability to manage these challenges? After all, the elections seem unlikely to change dramatically the composition of the government. The parliament is currently dominated by the party that has ruled since independence, the Front de liberation national (FLN), and another regime-supported party, the Rassemblement national démocratique (RND). An opposition coalition, the Instance de concertation et de suivi de l’opposition, is wavering on whether to boycott the elections. The coalition’s leader, Ali Benflis, retains credibility, but his party is not expected to do well if it does run. Fracturing continues among Islamist opposition parties over whether or not to cooperate with the government. These groups also are unsure whether or not to support the agreement with the Islamist party that led the armed insurrection against the regime, including the military, in the 1990s. This fracturing is on clear display in the run-up to these elections, further weakening the ability of the opposition to contest the regime.

However, since the last parliamentary elections in 2012, several key events have occurred that make these elections important. These include popular uprisings in early 2011, following the example of Tunisia, Egypt, and elsewhere, to which the government responded first by offering handouts, and followed up with promising constitutional reforms that were adopted by parliament early last year. The reforms, albeit limited, were a clear acknowledgement of the unsustainability of the current situation. In addition to introducing an independent commission to oversee the elections, the reforms widened parliament’s powers as a check on the executive. In addition, a 2012 law imposed quotas to increase  representation of women in party lists, causing a spike in the parliament. The new constitutional amendments, in addition to granting important individual rights and recognizing Tamazight (Berber) as an official language, strengthen youth representation in the body. These tacit steps toward managing inevitable social change—alongside the fact that, despite their internal fracturing and co-optation by the state, Islamist parties have not disappeared—mean that the parliament is not a meaningless institution. If the creation of the independent electoral commission, and perhaps an increase in voter participation, help give credibility to the whole electoral process, these elections may represent a chance for some of these new governance reforms to be consolidated.

The country’s leadership also indicated that it recognizes the need for fundamental change to handle mounting security and economic uncertainties. Steps taken in the economic realm include income tax increases, encouraging investment, and limited efforts to diversify in the energy sector. Security forces seem to be gaining ground over extremists. None of these measures represent anything close to effective solutions; official rhetoric about planned economic reforms is often contradictory and ignores fundamental problems such as unemployment. Many see the recent political and legal reforms as insufficient for promoting women’s equality or protecting individual liberties and minority rights. Also of concern is that the constitutional reforms did little to guarantee a more clear-cut transition of power in the case of Bouteflika’s death. This lack of clarity will, in turn, likely perpetuate the government’s paralysis.

Overall, the parliamentary elections—even if they bring about some shift in balance between governing and opposition parties—cannot do much to make up for the incompleteness of the government’s efforts. Certainly, Algerian society has shown signs of taking on the task itself, such as in the sphere of youth social entrepreneurship. Nonetheless, the broader context in which the elections are taking place—an environment of uncertainty coupled with a recognition by those in power that change is inevitable—make them important to watch.