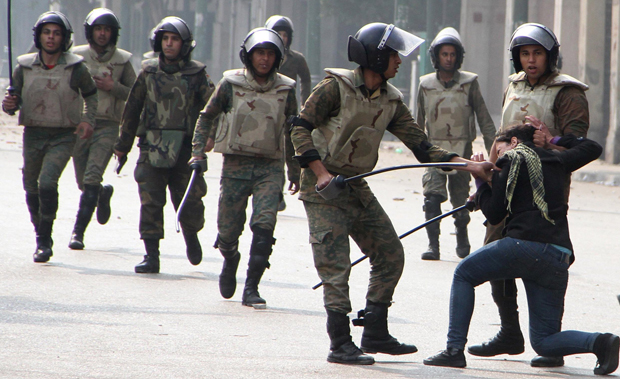 Amnesty International released two new reports on Tuesday detailing cases of human rights abuses in Egypt since the ouster of former president Hosni Mubarak. The first report, Brutality Unpunished and unchecked: Egypt’s Military Kill and Torture Protesters without Impunity, focuses on transgressions committed by Egypt’s military, while the second, Agents of Repression: Egypt’s Police and the Case for Reform, takes a closer look at police and state security, and offers recommendations on how to reform the monolithic institute.

Testimonies in both reports give insight into the tactics used in post-Mubarak Egypt, many of which are identical if not worse than what was witnessed in the past. In the first report, the army’s betrayal of the uprising is a recurring theme. “We were in a state of shock that the army which is supposed to protect us, which claimed that it is protecting the ‘25 January Revolution’, attacked us… If we were in a state of war with an enemy, I don’t think this would have happened,” Wael Saber Bshay told Amnesty International, after describing the events of the Maspero protests on October 9, 2011.

On that night, Bshay’s brother died, crushed under an Egyptian army APC, along with 27 other mainly Coptic Christian protesters. The Maspero protests proved to be a violent precursor to the Supreme Council of the Armed Forces’ (SCAF) determination to crush street protests. On December 16, 2011, during a sit-in at the Cabinet Offices, 17 protesters were killed, mainly by live ammunition, and another 12 were killed during a sit-in in Abasseya in April and May of 2012. Since then 3 military personnel have been tried in connection with the Maspero protests, under charges of “involuntary homicide.” For the Cabinet and Abbasseya sit-ins, accountability has been even more elusive, with no one charged to date. In stark contrast, over 600 protesters have been brought before military courts in connection to these events.

Attacks were not limited to street protests. Injured protesters who sought refuge in hospitals were often targeted. Army baltageya (thugs) targeted protesters injured during the Abbaseya protests in the surrounding hospitals. Ahmed Hassan Shazli told Amnesty “The doctor came with an electric razor and told me that I needed to shave my beard, that ‘thugs’ were searching the hospital and anyone they saw with a beard they were shooting.”

SCAF’s reaction was to often ignore accusations, unless public pressure pushed them to investigate themselves, which needless to say, led to no accountability. The new government has done little to ensure otherwise. While work done by Morsi’s fact finding committees has led to the release of 572 detainees, trials against military officials for their involvement in human rights violations remain nonexistent.

In its report, Amnesty is calling upon the government to conduct thorough and independent investigations into the military’s human rights violations, and give the fact-finding committees more resources and power to conduct their investigations, as well as to make their reports public. Amnesty is also calling for an immediate end to military trials for civilians, and for those detained over exercising their right to freedom of expression and assembly, to be released. It all recommends provisions in Egypt’s new constitution that guarantees that military forces are “subject to civilian oversight and can be held accountable for human rights violations.”

The second report focuses on one of the main demands of the January 25 uprising – a complete reform of the Egyptian state security and police force. Long a tool of repression under Hosni Mubarak, today’s Minister of Interior, Ahmed Gamal al-Din said that Egypt’s police have entered a new era in which they “will respect citizens’ freedoms, without any violations,” but actions that match these words have yet to be seen.

Hassiba Hadj Sahraoui, Amnesty’s deputy Middle East and North Africa program director, said “The different Interior Ministers that headed the police force since last year’s uprising have repeatedly announced their commitment to reforming the police and respecting human rights, but so far reforms have merely scratched the surface. Instead, they have tried to restore emergency-like legislation in the name of restoring security.”

The second report details similar violations committed by police and state security, focusing on the Mohamed Mahmoud clashes in November 2011, protests following the death of over 70 football fans in Port Said, as well as assaults on doctors and journalists in Cairo.  The report also details the torture methods used in police stations, one of the driving causes behind the January 2011 uprising, embodied in the form of Khaled Said, a young man beaten to death by police in Alexandria and a symbol of the protests.

According to testimony received by Amnesty, cases similar to Said’s continue to occur. Magdi Ahmed Abdel Rahman Hassan, detained in May 2011 after an altercation near his home, was beaten unconscious by police, his body dumped under a bridge. Hassan remained in a coma until his death in March of this year. His death is still under investigation. In October 2011, 23-year-old Essam Ali Atta died in custody, amid allegations that he was tortured by police. An eerily similar justification as was used for Khaled Said’s death came up in the case of Atta, with authorities saying that he swallowed a bag that may have contained drugs.

Out of Morsi’s 100 promises, of which only 4 have been fulfilled, many aimed to address the issue of police reform. However, the only police-related promise that he followed through with was implementing a performance-related benefits, rewards and promotions system as a means of restoring security in the country.

Among its many recommendations for reform, Amnesty calls for reform within the system, for investigations into cases of human rights abuses, as well as upholding the right to freedom of peaceful assembly, and repealing or reviewing laws have been manipulated in the past to restrict public gatherings and strikes. Amnesty has also called on foreign governments to suspend arms sales to Egypt, including shotguns, tear gas and armored vehicles, as well as calling on the Egyptian government to facilitate the outstanding visits of UN Special Rapporteurs on torture, execution and rights to freedom of peaceful assembly.