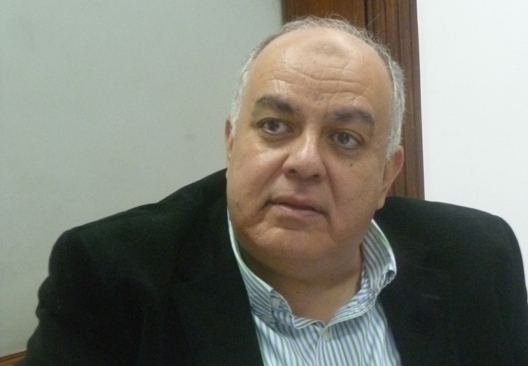 Now that most Brotherhood leaders are in prison or outside Egypt, there is less talk from within the movement about the ‘mistakes’ ousted president Mohamed Morsi made while in power. That is understandable, as few are available to conduct such an internal review, and furthermore, they are forced to protest, not reflect. In an interview with EgyptSource, Amr Darrag, one Brotherhood leader who has not faced arrest, came close to an admission. Often seen as part of the moderate and inclusive wing of the group, Darrag is at the center of alleged efforts to achieve reconciliation with the Islamist movement.

During the lead-up to the June 30 protests demanding early elections through the violent dispersal of the pro-Morsi sit-ins, several Brotherhood members spoke in vague terms of their ‘mistakes.’ It was a conciliatory gesture of sorts, admitting Morsi’s less than stellar performance but arguing this was not enough to undo his democratic legitimacy.

It is a fair enough logic, but it was never accompanied by any details concerning these mistakes. The closest to an admission came from Salah Sultan, who apologized for the Brotherhood’s negotiating with Omar Suleiman, opening channels with the military, not being honest enough about the efforts of corrupt regime figures to sabotage the revolution, and failing to absorb youth and women in their project. His statement was posted on the webpage of the Freedom and Justice Party, but later removed and described as only a ‘personal’ viewpoint.

As for Darrag, he said their mistake was that they ‘underestimated the power of the deep state.’ That may be, but it is not really a mistake. The mistake would be how they failed to hold together a revolutionary coalition that could withstand this power. The obvious answer centers on Morsi’s controversial declaration of November 22, immunizing the Shura Council and Constituent Assembly from the risk of judicial dissolution, installing a personally chosen public prosecutor, as well as placing his own decisions above judicial review. After this decree nearly all of his non-Islamist allies and advisors deserted him.

Certainly Brotherhood leaders will continue to defend this decision, and it fits within Sultan’s and Darrag’s admission of corrupt figures from the deep state aligned against the revolution. Perhaps Morsi figured the forces of the revolution would rally behind him. If so, he figured wrong.

But if not this event, how might Darrag characterize Morsi’s mistakes? I had an opportunity to interview him shortly before he was detained at the Cairo airport traveling to Turkey on November 4, though not arrested.

Again, he came close to an admission, sort of. “I think we trusted SCAF too much, maybe,” he said. He then continued as if there were other items to note. “You can argue about a lot of things that people consider as mistakes for the Brotherhood.”

But he quickly justified his only specific comment. “Everybody in Egypt trusted the military,” he said, and pointed to the 77 percent who voted ‘yes’ in the March 2011 referendum of the military roadmap. “Even those who said ‘no,’ they didn’t say no because they didn’t trust the military. They said no because of some other viewpoints [such as] starting with the constitution and not the elections.”

Darrag continued by stating that other revolutionary and political figures also met with Omar Suleiman, and that the military was the only organized power to administer the transitional period to democracy. Decisions were made with the information available at the time, and even if proved a mistake, blame is to be shared.

And rather than characterize the fraying of revolutionary alliances as Morsi’s failure, he said it was that other parties “did not help him achieve this objective.” Morsi honored the pledge he made with the Fairmont Group to not appoint a prime minister from the Brotherhood, he said. But most political figures refused to join the cabinet of Hisham Qandil, seeking instead to monitor government from the outside. “You cannot say that the government was not inclusive if you chose not to be in it,” Darrag said.

Qandil’s government was largely technocratic, with Brotherhood figures placed in key positions. But Darrag neglects to recall that some non-Islamists, such as Saif Abdel Fattah and Samir Morcos, did serve in the presidential office. But why did Morsi fail to keep these, and to win others toward participation? It was not a conspiracy to bring Morsi down, he asserts. He adds, however, “In order to make this review we have to sit down and make this review. This was not done. Maybe we find out that we needed to spend more effort or whatever. But I saw, with my own eyes, extensive efforts to persuade people to be on board with us and they just declined. Why is that? I don’t know.”

The fact is the Brotherhood did not sit down and review. Granted, they were quite pressed upon after Morsi’s removal, to put it mildly. But in their continuing struggle against the military, might an apology win back revolutionary forces who have never ceased? Might recognition of specific mistakes win back liberal forces timidly opposed to the crackdown against them?

Perhaps the Brotherhood has burned too many bridges, and perhaps neither revolutionary nor liberal will ever trust them again. But Darrag, instead, is put off by the question. “I don’t actually agree on the prescription that there are mistakes that the Brotherhood has to acknowledge and apologize for,” he said. “Of course there are mistakes, I am not saying that we don’t make mistakes. But this has to come through a process that all political forces, if they want to learn from past experiences, acknowledge their mistakes.”

Again, a reference to mistakes with no specifics. Would other political forces list their errors? Perhaps only that they voted for Morsi in the first place. There is culpability among all far beyond the choices of president, and who knows how deep any conspiratorial rabbit hole goes.

But Darrag demonstrates an unspoken Brotherhood viewpoint that public reflection is dangerous. Self-criticism might split the group, and certainly violates the now absolute rhetoric of aggrieved victimization. Darrag believes that the current political state is hazardous for all, worse than the Mubarak regime against which all revolted. But his perspective betrays any willingness to accept the brunt of blame.

Perhaps it is not helping the Brotherhood, but if they tried apologizing even once, it might help the original revolutionary cause. But consistent with his position, Darrag anticipates the reflection coming from the other side. “People think and reconsider,” he said. “I am sure that one day the majority will join us in the same way that happened on January 25th.