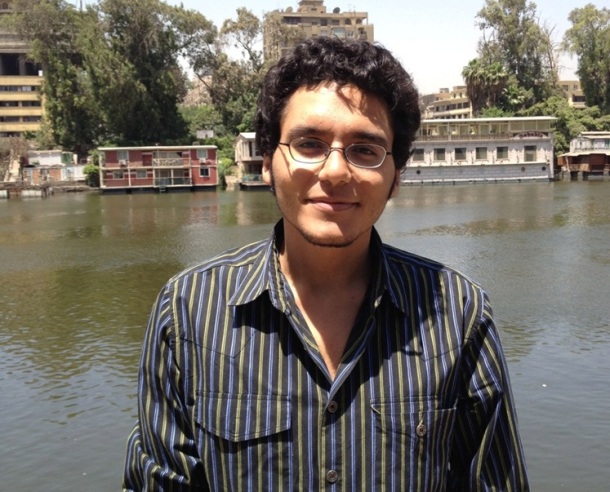 No stranger to the world of Egyptian politics, Noor Nour has never strayed far from the country’s political controversies, all of which existed long before January 25, 2011. Today, he is a member of the No to Military Trials for Civilians movement, a prominent political activist, as well as a very active Twitter user with well over 56,000 followers. He graduated from the American University in Cairo, earning a Bachelor’s degree in Political Science, and is currently completing a degree in law at Cairo University.

His father, Ayman Nour, is a former member of parliament, the founder of El Ghad Party, and was the first man to run against Egypt’s former president Hosni Mubarak in the 2005 presidential elections. His mother, Gamila Ismail, was a stringer for Newsweek, a TV personality, a parliamentary candidate, and a very vocal political activist, particularly during the arrest of her then-husband Ayman Nour, in 2005. Explaining his father’s arrest, to which he attributes his own involvement in the political arena, Nour says, “The Ghad Party was on the rise, and false allegations were made against my father, accusing him of forging documents, and during his detention he declared he would run for the presidency.”

As a result, Nour became immersed in various family-inspired causes that were not necessarily political in nature, but enabled him to participate in movements on the Egyptian street-level. This activism eventually took a political turn with the emergence of the January uprising, which was a spark for many of Egypt’s revolutionary youth, and Nour was certainly no exception.  There are several videos of him on YouTube, displaying his bravery and passion for the cause, in which he details the numerous arrests and attacks he has faced when participating in protests.

Having been involved in the struggle against Mubarak’s regime from an early age, it would have been very easy for Nour to lose hope, but despite seeing and experiencing many of the former government’s illegal and corrupt tactics first-hand, he has always held on to the belief that things would change. “It was going to happen sooner or later. I was definitely very optimistic but believed it would happen only once the middle and upper classes, or ‘privileged classes’ started joining the movements on the streets, and that is essentially what happened on the 25th of January 2011,” he recalls. He also remembers January 28th, labeled the ‘Day of Rage’, as the day when the general public took to the streets, believing that change was inevitable. When calls for a revolution began, that was when it all suddenly became very real.

Almost 18 months have passed since Mubarak’s ouster and Egypt has witnessed its very first ‘free and fair’ presidential election. While most people were concerned with who to vote for and how to defeat the opposing candidates, Nour was among those more concerned with the actual legitimacy of the elections. He publicly stated on several occasions that he was boycotting the vote. He believed that the very candidacy of Ahmed Shafik (Mubarak’s former Prime Minister and the man many hold politically responsible for the Battle of the Camel) was the foremost example that the revolution had failed. “It was an uprising that never finished, or one that never became a revolution,” he says. Scores were outraged when the list of potential presidential candidates was announced, on it men like Shafik, and the late Omar Suleiman – the former head of the Egyptian Intelligence Service best known for his firm grip on an extensive spy network, in addition to his role in a CIA rendition program, in which terror suspects were sent to Egypt for interrogation, with confessions often tortured out of prisoners. It became very clear that these elections were not the outcome of a revolution. "When Mubarak stepped down, this was not how we envisioned our elections would go," he says, referring to the irony of a presidential candidate publicly stating that Egypt’s ousted president was and still is his idol.

It could be argued that a growing resentment of the Supreme Council of the Armed Forces (SCAF) and the decisions it made in handling the transitional period during the past year and a half had a direct impact on how the presidential elections played out. Many liberals chose to vote for Morsi, in order to prevent Shafik and SCAF from maintaining their grip on power. Consequently, many have been overjoyed with Morsi’s victory, and believe Egypt is witnessing the beginning of the end of military rule. Nour, however, claims otherwise, refuting the widespread belief that Morsi’s win will prevent the military from staying in power. "The army facilitated the elections, and no one will come to power and try to bring down military rule and transform it into civilian rule singlehandedly," he comments. On the contrary, Nour believes that in order for the revolution to truly succeed, Egypt will need a true leader to step up and take the helm.

Before the elections, Nour predicted two possible outcomes: Either an inadequate candidate would be elected – one who does not represent the principles or beliefs of the revolution – and would not attempt to challenge military power. He would simply accept the status quo and allow himself to become a puppet-president; or a decent candidate would come to power, capable of standing up to the existing military regime. Prior to the elections, Noor predicted that regardless of the new Egyptian president’s intentions, he would struggle to bring about significant change, standing alone in a battle against a system of corruption and patriarchy that has been in place since the time of Gamal Abdel Nasser. “He will need a proper revolution to bring down military power,” Nour said.

For the first time in the country’s political history, Egyptians felt that their vote could actually make a difference in the outcome of the presidential elections, and many found themselves overwhelmed by the prospect. Widespread discussions took place, within the walls of the traditional ahwas (coffeeshops), on their way to and from work on public transport, in their homes and offices. One of the main issues plaguing the revolutionary forces was the attempt to decide which of the candidates could be defined as a ‘revolutionary’ candidate; in other words, they were looking to determine who would uphold the principles of the revolution and who wouldn’t.

Before the elections, Nour predicted that Nasserist Hamdeen Sabahy, former Brotherhood member Abdel Moneim Aboul Fotouh, and leftist Khaled Ali would garner most of the revolutionary votes, while many votes would be lost to the boycott. He also predicted that very few would vote for Shafik or the former Foreign Minister Amr Moussa. At the time, EgyptSource asked Nour if runoffs took place between Amr Moussa and one of the Islamist candidates – would the revolutionary groups rally around Moussa to counter an Islamist threat? In reality, the runoffs pitted Morsi and Shafik against one another, but Nour’s calculation was still reasonably accurate. He predicted many would refuse to participate in an election where the choice was between what he described as “A member of the old regime or a ‘merchant of religion.’" True to his prediction, voter turnout barely reached 40%, a significantly lower figure than was witnessed during the parliamentary elections. He also stressed the fact that whatever the outcome, most revolutionaries would be dissatisfied. As revolutionaries, their dedication to the uprising is inherrent, but as Nour says, "This is no longer a revolution." Since Hosni Mubarak’s ouster, most governmental changes have been cosmetic, with the majority of institutions and major players remaining the same.

Of more concern for the Egyptian people however, is the fact that their newly elected President was sworn in under a constitution that has yet to be written. This is merely one of many hotly debated topics among Egyptians, with most people worried that SCAF will exert its influence on the writing of the new constitution, especially after a major power play, issuing an addendum to the interim constitutional declaration. As a result, Nour is a firm believer that the new constitution should be written to guarantee civilian oversight of the armed forces, signaling a shift away from the historical status quo which grants the military superior powers. He would have also preferred the constituent assembly to have been made up of legal intellectuals. He says, "Idealistically speaking, the constitution would be written by judges and university law professors," referring to the lack of legal intellectuals in the assembly.

Nour attributes this oversight to the way in which SCAF has handled the transitional period, "After February 11th, several professors sat down and created workshops for students to draft potential constitutions, including principles of equality and justice among others, and the fact that this was completely ignored by the military shows just how desperate they are to exert their influence." Accordingly, Nour believes that for any proper political system to function a system of checks and balances must be implemented, in order to keep all branches of government in place, and guarantee transparency of all public institutions.

Despite the numerous setbacks, Nour is confident that there is a light at the end of the tunnel: “I am optimistic for the long run. We will have a tough job on our hands in the short run, but it can’t get much worse, and because of that, the future is bright.”

View a video excerpt from the interview with Nour here.