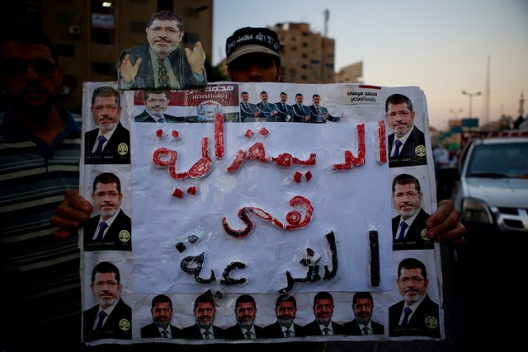 The whirlwind of events since June 30 which led to the ousting of former Egyptian President Mohamed Morsi has served only to polarize Egyptian society even further, forcing people to take positions either with the coup and army, or against the coup and Morsi. This attempt to characterize the current situation in Egypt in simplified binary terms does not take into account those who oppose both the coup and the Muslim Brotherhood. In this atmosphere of deep polarization, a rejection of Morsi is often equated with being an “apologist” for the coup. This is one person’s attempt to set the record straight.

Morsi’s supporters conflate normative and positive statements. [Normative, (what ought to be) is opinion, whereas positive (what is) is fact. “The army has no place in politics,” taken normatively means the army shouldn’t have a place in politics – an opinion most can agree upon. “The army has no place in politics,” taken positively means it isn’t involved in politics. This is a statement of fact, and clearly a false one. The army’s involvement in politics and the ministry of interior’s brutality are (unfortunate) facts. Accepting them as fact does not connote approval or mean I despise them any less. Do I need to constantly decry the coup every single time I mention it? Why? It’s a fact. Facts just exist.

Rather, the Brotherhood must be decried because they allowed this disaster to happen. When a bull gores a man I will mainly blame the man. I have no expectations of a bull other than to be a bull and to gore people. When the army interferes in politics due to the abject failure of a civilian government, I’ll blame the civilian government. But it seems to some, my very acknowledgement of these things as facts makes me an “apologist” for them. Lambasting the coup will achieve nothing. A misguided and dangerous campaign, which attempts to turn back the coup through protests, will achieve nothing.  Morsi is not coming back, and neither is the constitution in its previous form, nor parliament. Nothing will push the armed forces and the interior ministry back, short of a broad national movement that shows them most of the country rejects them.

Tahrir was invincible when it was one voice against the Supreme Council of the Armed Forces (SCAF) and ministry of interior. Then it became about factions and partisanship.  The January 2011 uprising pushed back the ministry of interior and the army because it was a united front. This front no longer exists. Your protests, rhetoric, and the demands you insist upon, ensures that this front cannot be restored. In order to recover, the Brotherhood’s supporters need to immediately rejoin the process, unite with past comrades and push from within.

In the absence of strong civil institutions, the army will have its hands in politics for a while. And the army’s constant involvement in politics will pre-empt the growth of strong civil institutions. But the “deep state” cannot be dismantled at once; it has to be reformed gradually and very carefully over a long period of time. Immediately dismantling it will be disastrous. A house may have a crooked pillar but you cannot just tear it down. That is why Morsi’s supporters need to get into the process and push hard from within – not give them more ammunition. Everyone else immediately entered the process and started working hard to push for an outcome that reflects their vision. The Brotherhood burned their last bridge when they chose confrontation.

There has also been a dangerously one dimensional thinking that treats everything from January 2011 until now as a level playing field. Trying to justify a decision to march to the Republican Guard club by citing Maspero is illogical. We’ve seen how the security forces clear sit-ins. We saw it, over a span of two years, at Maspero, Tahrir, and the cabinet. Based upon past experience, we know exactly what will happen – security forces will kill people then blame them for the crime.

The Brotherhood seems unaware that they have lost the unified front with which to face and beat the interior ministry and army. Rather than tone down the rhetoric, and take a more reasonable approach, they lash out, making people hate them even more. They give the security forces more pretexts. Al Masry al Youm journalist Menna Alaa is one of many who were attacked when trying to cover the Raba’a protests, and share the Brotherhood’s narrative.

Tell the Brotherhood to move on and you face accusations of trivializing loss and being an apologist for the coup. But move on they must because there’s a lot at stake. Not only the revolution, but their own existence, and democracy in the Muslim world are at stake. The Brotherhood keeps thinking about reversing the coup as if the coup was the root problem. It wasn’t. The root is partisanship that split the revolution’s ranks. The Brotherhood as a revolutionary force is a distant memory. And now they are trying to reverse the coup without reversing the partisanship. That only makes matters worse. Mass protests work when the people are either sympathetic or neutral, not when they’re so deeply and dangerously split.

Brotherhood supporters take every disagreement to be a core difference in core values instead of a difference in visions. If someone disagrees, they are immediately accused of anti-Islam bias, of being a hypocrite, an apologist for military dictatorship, for the coup, for massacres. And it seems they are no longer able to hear anyone’s voice but their own. It is a reaction that is typical of our endemic problems. We never blame ourselves for anything. It’s always someone else’s fault. In the case of a problem the priority is to solve the problem and ensure it doesn’t happen again. It seems the Brotherhood’s approach is to encounter the problem, blame someone for it, and pretend that solves the problem.  Reconciliation on how to approach the problem is the very first step for Egypt out of this deadlock.

Note: This was initially posted on Twitter prior to the August 14 protest dispersal.