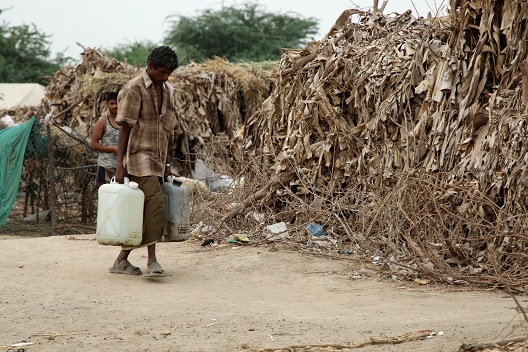 In a piece published last year, I examined the interaction of water and conflict in Yemen and Syria, two countries whose severe water shortages have enabled competing actors to wield this precious resource as a weapon in violent conflict to the detriment of millions of civilians.

One year on, the situation remains dire, particularly for Yemen, where the weaponization of water has brought the conflict to a critical stage in which the UN now estimates that 14 million people, or half of Yemen’s population, are facing “pre-famine” conditions. Water is one among several complex facets of the conflict and it remains difficult to determine the extent to which it has driven the violence. However, it is clear that for both sides, the struggle for access to water and control of its provision continues to be a strategic imperative, with the effect of mass civilian suffering.

The Strategy of Siege

As the campaign led by Saudi Arabia and the United Arab Emirates to thwart Houthi control of Yemen drags into its third year, the most significant offensive to date is playing out in the Red Sea city of Hodeidah. The Saudi-UAE coalition’s operation, known as Golden Victory, is attempting to capture the densely populated city, a key Houthi stronghold, thereby driving the Houthis out of the only port city under their control. Hodeidah’s strategic importance is derived from its access to international shipping lanes such as the Suez Canal, and from its general proximity to the fertile lands of the Tihama plain in Yemen and the Ras Isa oil export terminal.

Air strikes and ground clashes intensified throughout 2018, reaching a climax in June, when the fighting affected a key passage in the city’s north, blocking the only viable route for transporting large-scale goods from Hodeidah to the rest of the country. The Hodeidah Port serves as the central point through which approximately 70 percent of Yemen’s commercial and humanitarian supplies are imported, including crucial stores of food, water, and medicine for civilians in Houthi-held areas.

The weaponization of water through siege and blockades is a tactic both sides in the conflict have readily employed in an attempt to strengthen their leverage. Houthi forces have adopted these tactics to restrict the access in the battle for control of Taiz, which has severely constrained the ability of aid organizations to supply vulnerable civilians in need.

While the Saudi-UAE coalition recently announced a cessation of hostilities in Hodeidah at the request of the UN and aid agencies, the fear remains that if a full scale assault on Hodeidah resumes, the UN may need to declare a mass famine event.

Despite the temporary de-escalation of the current humanitarian crisis in Hodeidah, the situation for Yemen’s civilian population throughout the country remains dire. Following three years of aerial bombing campaigns and ground fighting, the destruction of Yemen’s water and sanitation infrastructure has created one of the worst health epidemics the country has ever experienced. Fuel shortages experienced by local water corporations have caused the costs of commercial water trucking—the main source of water for many— to skyrocket, leaving approximately 19.3 million Yemenis without access to clean water and sanitation. Fuel shortages also encumbered the ability of wastewater treatment plants to adequately treat public water supplies, leading to one of the most dire health crises the country has ever experienced.

As sanitation failed, cholera rapidly spread. While cholera was endemic to Yemen before the conflict, the spate of cases rose sharply from 2015 to 2017, following the destruction of critical water infrastructure that left many reliant on unsafe sources of drinking water. Although cases have reduced dramatically in 2018, the UN says it is concerned about a possible “third wave” of the epidemic. In October 2018, the Ministry of Public Health of Yemen reported that the cumulative total number of suspected cholera cases from April 2017 to September 2018 was 1,207,596, with 2,510 associated deaths.

For Yemenis afflicted by cholera, lack of sanitation is only part of the issue. Poor access to health care services compounds the effects of the pandemic. In 2017, it was estimated that 17 million Yemenis lacked access to even the most basic health services. In August 2018, airstrikes severely damaged Al Thawra Hospital in Hodeidah, which had served as a critical epicenter for cholera treatment. Following the attack, it was reported that estimated cholera cases in the city rose by a third.

Today, as a result of the conflict, only 45 percent of the country’s health facilities are currently operational. Despite the efforts of international organizations such as the UN, WHO, and other aid agencies, this reality has left many Yemenis untreated and more vulnerable to other water-borne diseases and public health crises.

While the current conflict has markedly increased Yemen’s water scarcity, Yemen was considered one of the world’s most severely water-stressed countries even before the war, with public water accessible to just half of the overall urban population, and to about 40 percent in rural areas.

Groundwater supplies have declined precipitously throughout the country, in both rural and urban areas. The World Bank estimates that the groundwater levels “plummet by six meters a year in crowded, mountainous regions outside the cities of Sana’a, Taiz, Dhamar, Amran and Sa’ada.” Before the conflict, the government enacted policies that actively encouraged the depletion of the existing water supply, including subsidizing cheap diesel pricing and funding surface or spate irrigation for water-heavy cash crops such as qat. Due to these policies, groundwater and irrigation were both cheap, which further strained the existing supply. In addition, a lack of central planning and general neglect of infrastructure—from porous pipes to poorly constructed and maintained dams—further contributed to water loss and caused the groundwater in many areas to become contaminated with sewage run-off.

With the onset of conflict, even regions once known for their lush green landscapes and arable soil have become unrecognizable. In Ibb, for example, Yemen’s most fertile area, an influx of internally displaced persons and the subsequent resource strain have rendered the land parched and unworkable. An inability to grow crops not only contributes to the humanitarian crisis facing Yemen’s growing population, but also affects its economic prospects.

In Sadaa, a Houthi-controlled territory, pomegranate exports—once a regional economic mainstay—declined by a third since 2015, owing to a lack of irrigation to grow the fruit and the rising costs of fuel to transport them. While this is in part because of the mismanagement of water resources and the effects of climate change on Yemen’s arable land, the impact of the conflict, particularly on trade routes and water infrastructure, has constrained the ability of farmers to transport and export the prized fruit. This latest blow to Yemen’s agriculture sector is but one example of the toll the water crisis—exacerbated by the conflict—has taken on the country’s already weak economy.

While the UN and relief agencies have repeatedly warned that Yemen’s water crisis adds to fuel to the conflict and have called for both sides to stop targeting humanitarian supplies including water, the disjointed and often inconsistent calls to action have not been followed by any meaningful response from the international community. After three years of brutal fighting, water scarcity has further entrenched the actors in Yemen’s conflict, perhaps deepening what has become a war of attrition. At the same time, the long-lasting effects of the conflict—from the mass displacement of civilians to the destruction of critical infrastructure—are exacerbating the water crisis.

With no relief in sight, Yemen’s water crisis and its interaction with the conflict will continue to drive the country further toward humanitarian collapse. Yemen’s water situation may not be unique and will perhaps serve as the canary in the coal mine for similarly water-scarce countries in the region. The outcome of the conflict, and the ways in which water continues to shape it, may be a harbinger of what is to come for countries without protections to ensure the equitable provision and use of this most precious resource.

Margaret Suter is an MA graduate from the American University School of International Service International Affairs Program. Her work focuses on international development and civil society in the Middle East and North Africa.

Image: Photo: A man displaced by the fighting in the Red Sea port city of Hodeidah carries jerry cans filled with water at a camp for IDPs near Aden, Yemen June 23, 2018. Picture taken June 23, 2018. REUTERS/Fawaz Salman