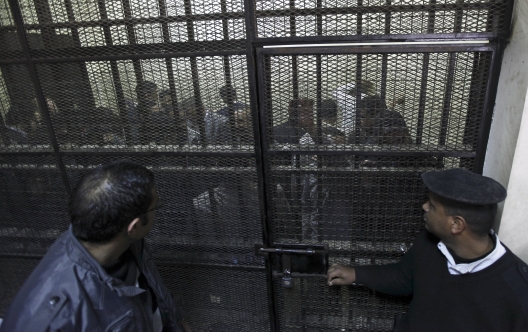 Amidst the raft of new legislation proposed and passed in the first weeks of Abdel Fatah al-Sisi’s Presidency, a new and restrictive draft law to govern non-governmental organizations (NGOs) is once again on the table. The draft law, submitted by the Ministry of Social Solidarity in late June 2014, introduces a number of legal constraints that would make it extremely difficult for organizations to form and carry out their work. The Ministry’s draft law is clearly in violation of domestic and international laws that protect the right to freedom of association. Indeed, a coalition of 29 Egyptian organizations swiftly denounced the draft as “a flagrant breach of the constitution and Egypt’s international obligations.”

This draft bill is the latest in a series, as Egypt has been ostensibly trying to reform the law governing NGOs for a number of years. The current law was adopted under former President Hosni Mubarak and is already one of the most restrictive NGO laws in the world. Nonetheless, the Egyptian government has continued to pursue a replacement both before and after Mubarak’s removal in 2011. In January 2012, the Ministry of Social Solidarity (then operating under the Supreme Council of Armed Forces) released a particularly restrictive draft NGO law. Subsequent months saw drafts prepared by both houses of the legislature, the Muslim Brotherhood’s Freedom and Justice Party, and by the Office of the Presidency of Mohamed Morsi itself. (The so-called “Presidency draft” was submitted for Morsi’s approval in May 2013, and likely would have been adopted had the events of that summer not overtaken it.) Most recently, a committee convened by the former Minister of Social Solidarity, Ahmed al-Boraie, developed a draft NGO law in late 2013; the committee included a number of civil society representatives and their draft – while by no means perfect – was substantially more enabling and less restrictive than the one currently under consideration.

The latest version proposed by the Social Solidarity Ministry, however, appears to be a barely-amended version of its 2012 draft: If passed, it would have a deeply detrimental impact on civil society and constitute a further regression for civil and political rights in Egypt. While the draft has some elements that appear potentially more lenient than the current law, taken as a whole it seems designed to give the state unprecedented control over organizations and legal means to interfere in their internal affairs.

For instance, the law contains a number of restrictions on the work NGOs may undertake. It includes a broad prohibition on activities deemed to “threaten the national unity, violat[e] public order or morals.” It stipulates a blanket ban on trade union activities, which could circumscribe NGOs’ work on labor issues. It also prohibits NGOs from engaging in “political activities” as described in Egypt’s Political Parties’ Law, with a definition broad enough to encompass political advocacy. By way of contrast, a number of countries, including Iraq and Tunisia, specify particular activities that NGOs may not engage in, such as fundraising for political candidates, while explicitly protecting their right to political expression; this prevents the state from abusing a broadly-phrased ban to quash political dissent. Finally, the draft law prohibits organizations from carrying out field research or surveys without the prior approval of a government agency.

The draft law creates a range of limitations on the finances with which NGOs are sustained. Most notably, it institutes a system of prior government approval before organizations may receive foreign funding: Organizations must apply to a government committee which may object to the receipt of foreign funds for any reason. (Similar legal restrictions are in place in Russia and Ethiopia, among others, but have been eschewed in NGO legislation recently adopted by Iraq, Kosovo, Macedonia, and Tunisia: In these countries, groups that receive funding from abroad must – at most – notify the government after the fact and perform additional financial reporting.) Under Egypt’s draft law, even local fundraising is restricted; the draft requires that organizations obtain a Ministry permit before they may collect donations. In all cases, the assets of an organization, whether from local or foreign sources, are to be considered “public funds” for the purpose of applying the Penal Code; consequently, any instance of financial wrongdoing by an NGO or NGO member will carry a much more severe penalty.

From the outset, the draft law creates obstacles for individuals wishing to form and register a new organization. An aspiring NGO must have ten members, for instance – far more than the two or three typically required by other countries’ laws – as well as property that it occupies. Further, all organizations doing civic work must be registered under the NGO law, or face a penalty. In the draft, the registration process is called “notification,” but in effect the Ministry retains considerable discretion to reject such notification if they find that the NGO intends to engage in “prohibited” activities. NGOs may challenge the rejection, but must wait for a ruling from the court before they may begin operating – a process which could stretch on for an indeterminate amount of time. These provisions seem in clear contradiction of Article 75 of Egypt’s Constitution, which stipulates that non-governmental associations and foundations “shall acquire legal personality upon notification” to the state.

The draft law provides for a number of distinct limitations on foreign organizations, as well, rendering it immensely difficult for them to work in Egypt. Under the draft law, foreign organizations face a more complicated registration process, many details of which would be left to implementing regulations (and thus subject to frequent change). An organization’s registration is prohibited altogether if it receives direct or indirect government funding, or if its activities are deemed to be aimed at spreading the views of a certain political party or violating national security. Those organizations that do manage to register with the state are permitted only to carry out activities considered “consistent with the needs of the Egyptian society and based on development priorities while showing regard for public order and morals.”

Finally, the draft law imposes very harsh penalties for legal infractions. It expands the grounds on which the Ministry may request a court to dissolve an organization altogether, including: performing prohibited activities, receiving foreign funds without approval, and, bizarrely, the “inability of the association to achieve the purposes for which it was established.” For members and managers of NGOs, at least one year in prison and/or a fine of at least EGP 100,000 (roughly $14,000) is imposed for a range of violations. The draft also envisions the imposition of “any more severe penalty in the Penal Code or any other law.” This ominous provision was the basis for the prison sentences handed down to 43 NGO employees – including 16 Americans – in June 2013, for receiving foreign funds without permission.

The Ministry’s draft law (in all but a few details the same draft it proposed in January 2012) is more oppressive and limiting than Egypt’s current NGO law. It backtracks considerably from the draft law that was nearly approved by Morsi before his ouster in July 2013. And it appears to align with restrictive aspects of NGO legislation currently in operation in some of the world’s most NGO-unfriendly countries, such as Russia, where the government can designate as “foreign agents” any organizations receiving funds from abroad and carrying out political advocacy; Zimbabwe, where NGO registration procedures are mandatory and complex; and China, which broadly prohibits NGO activities related to advocacy, labor rights, and minority issues among others.

Troublingly, Egypt’s current climate seems ripe for the imminent passage of a law of this nature. Despite some official assurances that a new NGO law won’t be adopted until an elected parliament can consider the issue, the government has been moving ahead in enacting other laws and regulations by decree. Moreover, according to sources present at the June meeting to present the draft law, the Ministry indicated that its latest draft was the only version of the law that the government was willing to consider, and that many of its most restrictive elements are not subject to change. The strong sense of national pride and suspicion of foreign interference means that Egyptians are unlikely to rally against it, despite its clear unconstitutionality and flouting of individual rights. And international condemnation (or, more often “gave concern”) has not deterred the state from taking other oppressive measures, from passing a restrictive protest law last November to the jailing of journalists last June, which are serving to stifle all forms of dissent.

Civil society organizations seem like the next logical target. The latest NGO draft law appears designed to give the government legal means and discretion to suppress any organizations it feels threatened by, which, if history is any guide, are likely to be those that advocate for civil and political freedoms, or that monitor the state and seek to hold it accountable for human rights abuses, or that merely comprise members of the political opposition. But if passed, the draft law will inevitably have an inhibiting effect on the formation and activity of other groups as well. Adopted in its current form, the draft law will undoubtedly curb the development of civil society in Egypt, choking off a vital sector and moving the country even further off the democratic path.

Elly Page is a Legal Advisor with the Middle East and North Africa office of the International Center for Not-for-Profit Law (ICNL), specializing in the legal environment affecting freedom of association and assembly in the MENA region. She is based in Amman, Jordan.

Image: Photo: Activists, accused of working for unlicensed non-governmental organizations and receiving illegal foreign funds, stand in a cage during the opening of their trial in Cairo March 8, 2012.(Reuters/Mohamed Abd El Ghany)