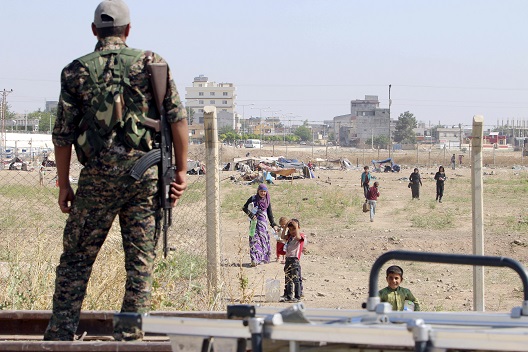 A Kurdish People's Protection Units (YPG) fighter looks at makeshift tents between the Syrian and Turkish borders of residents who fled Maskana town in the Aleppo countryside, as he stands in Tel Abyad town, Raqqa governorate, Syria, June 23, 2015. (Reuters)

An operation launched by a joint coalition of Kurdish and Arab rebels in May 2015 culminated in the capture of roughly 4,000 square kilometers from Islamic State (ISIS or ISIL) militants, including the important Tal Abyad crossing on June 15, depriving ISIS of one of the logistics and supply routes from Raqqa from Turkey. This victory raises the possibility of a US-aided Kurdish-Arab coalition that could capture the de-facto ISIS capital of Raqqa and the remaining ISIS-controlled border territories near Turkey in northeast Syria. Kurdish-Arab coordination could be the key to defeat the ISIS, but only if backed by both Turkey and the West.

The Kurdish People’s Protection Units (YPG)—the Kurdish military arm in Syria affiliated with the Turkish nationalist Kurdistan Workers’ Party (PKK)—developed plans to connect Kurdish enclaves in 2013. These plans emerged after a coalition of Free Syrian Army (FSA) rebel groups and jihadists expelled the YPG from the countryside of Raqqa and Aleppo, where joint Arab-Kurdish councils operated in cities like Manbij and Raqqa. The YPG hoped that a contiguous Kurdish region along the Syrian-Turkish border would connect the local administrations in Afrin, Kobani, and Hasaka that are separated by mixed territories inhabited by Turkmen, Arabs, and Kurds. This strategy resulted in tensions with Turkey and the Syrian opposition. Syrian rebels worry about Kurdish domination over the mixed demography in these territories. Turkey, on the other hand, fears the strengthening of the YPG (and in turn the PKK, a group deemed a terrorist organization by Turkey) and a potential Kurdish administration on its border.

Historical grievances remain between the Kurds and local Arab tribes that the Syrian regime placed in the Kurdish-dominated areas in Hasaka province in the 1970’s as part of an Arabization plan to change the region’s demographic balance. These Arabs now fear expulsion from their lands by the Kurds. Both ISIS and the Syrian regime have tried to recruit these Arab settlers, portraying themselves as Arab protectors against the Kurdish ascendancy. However, not all Arabs view Kurds with suspicion. Kurds have maintained good relations with the Arabs of the northeastern region in Syria, such as the Shammar tribe.

Syrian Kurds led by PKK proxies—such as the Democratic Union Party (PYD)—have tried to mitigate these tensions by forming alliances with Arab tribes and FSA groups to administer these territories. Kurdish officials have indicated they have no plans to expel Arab settlers from Kurdish-controlled regions. In July 2014, the Kurds appointed an Arab co-governor from the Shammar tribe in the Hasaka province, whose tribe in 2013 helped the YPG to take over the Syrian-Iraqi Yarubiye border crossing from ISIS. In September 2014, the YPG formed a coalition with Arab rebels in Kobani to receive Western support to defeat ISIS in the countryside of Aleppo and Raqqa, hoping to capture ISIS’s de-facto capital. This alliance of convenience was formed after ISIS drove the FSA out of the Aleppo and Raqqa countryside when clashes erupted between ISIS militants and other rebel groups in January 2014. Although some of these rebels previously fought against the YPG, they shifted their allegiances when ISIS made clear its intent to dominate all rebel territory.

This calculated YPG-FSA alliance almost led to losing all of Kobani; when ISIS saw the potential threat posed by alliance, it launched an attack on the area on September 15, 2014 to disrupt Kurdish coordination against its expansion. But the ISIS attack on Kobani inadvertently led to US airstrikes and weapons deliveries to Kurdish-Arab rebels, allowing them to recapture the strategic and symbolic town on January 26, 2015. The YPG-FSA coalition capitalized on the anti-ISIS air support, expanding its reach and capturing Tal Abyad on June 15. The coalition even managed to attack ISIS further south, capturing Ayn al-Issa and the Brigade 93 base, and bringing them a step closer to Raqqa. Despite these gains, the United States remains reluctant to train and equip Kurdish or Arab rebels.

US apprehension over a train-and-equip program for Kurdish-Arab rebels on Turkish territory relates to concerns over alleged forced population movements by the Kurds in northern Syria and the PYD and YPG’s affiliation to the PKK. The Syrian Coalition also accused the Kurds of carrying out violations against the Arab and Turkmen inhabitants of Tel Abyad. Furthermore, the Kurds do not share the same strategies toward Assad as the Syrian opposition, preventing some Western countries from working with Kurdish rebels. The UK government, for instance, suggested in March 2015 that it could not support the PYD while they maintain links to the Assad government and refuse to cooperate fully with the moderate Syrian opposition.

Western unease over alleged Kurdish ties to Assad ignore the growing fears of the Syrian government over expanding Kurdish influence backed by US-airstrikes and recent clashes between the Kurds and government militias in the province of Hasaka. Empowered by coalition airstrikes, the Kurds refused to support Assad against ISIS in Hasaka, choosing instead to remain neutral.

The reality is that the Kurds maintain their own agenda. Kurdish forces have kept informal ceasefires with the Syrian government in provinces like Hasaka since July 2012, but they have also reached agreement with Turkish-supported Islamist rebels to end hostilities in April 2014. These ceasefires demonstrate Kurdish pragmatism in the pursuit of their own interests and defense of Kurdish territories, bound by neither FSA rebels nor Assad, but suggest a willingness to work with moderate FSA rebels when their interests converge.

Despite their effectiveness as a fighting force, Syrian Kurds reject their use as cannon fodder for Assad’s jets to appease aspirations to expel Syrian government troops from the Kurdish capital of Qamishli. If the anti-ISIS coalition could create a no-fly zone—similar to the one created in Iraq in 1991—it could change the calculus in favor of dislodging Assad’s forces and advancing against ISIS. This decision, however, would ultimately depend on the commitment of foreign allies to the campaign. So far, neither Turkey nor the West have any stomach for a bigger military involvement in Syria.

If Turkey, the United States, and the Kurds can agree to use the YPG-FSA territories as a safe haven for US-trained FSA rebels and agree to arm YPG forces, it could potentially tip the balance in favor of the Syrian opposition against Assad and ISIS. The liberated territory recaptured by this force could then hold immediate local elections through which a power sharing arrangement would allow for joint governance and administration. This new local government would fill the power vacuum and coordinate the rebuilding of homes and damaged infrastructure.

However, this model for future cooperation and stability in Turkey and northern Syria would only work if Turkey supports rebels that back a similar secular electoral system, not one governed by sharia. While the Syrian opposition supports a secular system, it lacks fighting forces on the ground to maintain security. The Kurds would provide this need protection against jihadists on the condition that FSA rebels share this secular vision. “We are ready to cooperate with those who accept democracy and secularism,” PYD leader Salih Muslim told the author in an interview.

If the United States, Turkey, and the Kurds cannot negotiate over the future of northern Syria, they would risk losing the region to ISIS. With each passing day, ISIS regains its footing and adapts to the changing environment. On the other hand, if foreign forces can commit to supporting Syrian rebels, and Arabs and Kurds can agree on a shared future, the anti-ISIS contingent could ride the momentum created by the recent Kurdish-led rebel offensives and possibly win the battle for Raqqa.

Wladimir van Wilgenburg is an analyst of Kurdish politics for the Jamestown Foundation.