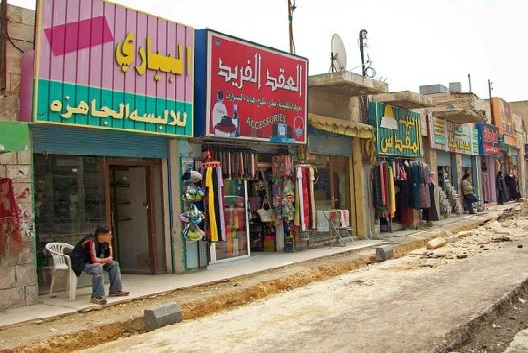 The recent Twitter war of words that erupted in Jordan last week illustrates just how divided the country is between the haves and have-nots, and how the pervasive sense of injustice and corruption continues to boil under the surface. Last week, Omar Katamine, the son of the Minister of Labor and Tourism Nidal Katamine, posted a rant on Facebook about a fight he almost got into with a Kia driver while he was at a stop light in his Mercedes Benz. Katamine claimed that Jordanians are “so mad [that he] drive[s] an S class” and that he should consider upgrading to a Lamborghini after a man “got out of his Kia and wanted to fight.” Katamine said, “I guess he doesn’t know any better.”

The Jordanian people immediately took to Twitter with the hashtag #TheMinistersSon to criticize Katamine and his comments, but also to raise some serious issues with the classism that his Facebook rant so vividly illustrates. Behind the arrogance of his comments lies deep-seated resentment among the vast majority of the population that lacks the privileges and access a minister’s son would have.

The eradication of government nepotism and corruption has been a constant demand in pro-reform Jordanian protests over the last few years. Not only does nepotism maintain an unbalanced concentration of wealth and opportunities for a minority of the population, but also the people in such positions have grown into an elitist class that is disassociated from the rest of society. While their jobs are to be representatives and public servants, they have instead detached themselves from Jordanians, maintaining a paternalistic and condescending view of the people from which they are borne. In this way, middle- and lower-class Jordanians feel increasingly alienated from the system of power in their own country.

One cannot ignore that Katamine likely bought his Mercedes Benz with Jordanian taxpayers’ money. Meanwhile, the World Bank reported in 2008 that 13.3 percent of the country lived in poverty—a number that jumped to 14.4 percent in 2010 and, if the pattern persists, has increased significantly in 2013.

Twitter user @sandra_hiari pointed out the hypocrisy of Katamine working for the International Labor Organization, saying, “The fact that #TheMinistersSon was/is employed by @ILO is [the] epitome of hypocrisy & irony – looking down on [a] @KIA driver from [another] social class.”

Shockingly, public outrage through the #TheMinistersSon hashtag coincided with the passing of Tharifa al-Qudah, a twenty-eight year-old Jordanian man who publicly set himself on fire in March 2014 in the middle of a busy Amman street. Police pulled over al-Qudah and issued him a fine of 10 Jordanian dinars for a traffic violation, which al-Qudah pleaded that he could not afford, and led to the sense of frustration and desperation that prompted his self-immolation.

This is not the first incident of its kind. In June 2013, a man set himself on fire outside of the ministry of social development, exhausted from the discrimination and difficulty he faced to find a job. As early as May 2012, a man set himself on fire in Khalda after being terminated from the Jordanian Central Electricity Generating Company, fearing he could no longer provide for his family.

Unemployment is the foremost concern to Jordanians. While the official unemployment rate is held to be 12.5 percent, unofficial employment rates soar as high as 30 percent. One of the greatest impediments to finding work is that the country’s jobs, processes, and institutions are largely only accessible by wasta, or “an in.” The wasta is the biggest enabler of nepotism in the country, raising the ranks of high-class Jordanians’ family members and friends while completely excluding capable lower class Jordanians from a chance at promising opportunities. In this way, the jobs in the country remain within the same social spheres, making the rich richer and the poor poorer. This endemic favoritism often drives the Jordanian poor to acts of desperation, if only to be heard—among them self-immolation.

Coincidentally, on the same day as al-Qudah’s passing, King Abdullah II held a reform planning meeting with the al-Nahda parliamentary bloc; according to the Jordan News Agency in Petra, “The national comprehensive reform drive is proceeding according to a clear roadmap and is making nonstop and well-thought-of progress.”

What does that even mean?

It seems that King Abdullah’s “reform drive” has been quite literally stuck in time for the last three years. The only substantive result of Abdullah’s reform drive has been mounting frustration among the lower class in the face of empty promises and wasted time. King Abdullah’s government, made up of an exclusive bubble of affluent and privileged Jordanians with access to resources, feels no real motivation for any significant reform. The lack thereof exacerbates the plight of the poor, increasing this sense of desperation. As repetitive high-risk efforts (such as Friday protests and publications critical of the government) to shift power back into the hands of the majority show no visible signs of progress, activists grow increasingly discouraged. King Abdullah’s lack of concern propels a dangerous, intensifying, and festering anger—one that could result in mass social unrest.

In response to Katamine’s Twitter comments, former Jordanian Senator Michael Nazzal, the chairman of the Federation of Tourism Associations, said, “I think the parents of any such kids have to teach them respect and [a] positive attitude.” But, #TheMinistersSon reflects much more than bad parenting. It is a deep and fleeting glimpse into the heavily imbalanced and fragile Jordanian society that has devolved from generations of government shortcomings—and more importantly, the people’s failure to strongly confront them.

Soon after his initial blunder, Katamine took to social media again to issue a non-apology to anyone that may have been offended by his comments. He lamented that while “normal” Jordanians can make “millions of Facebook posts daily” without garnering any attention, “if one’s father is a minister it is not possible for him to live his life like everyone else.”

If he can afford to drive a Benz, it sure doesn’t look like it.

Amani Al-Khatahtbeh is a Jordanian blogger based in the greater New York City area working as the editor-in-chief of MuslimGirl.net.