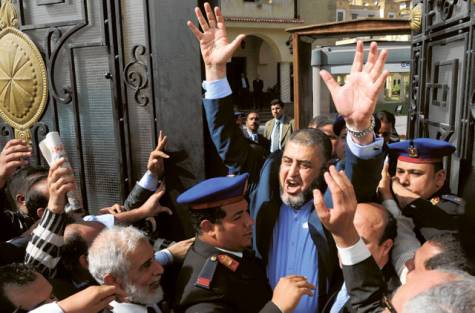 Reflecting on the recent debate over the Muslim Brotherhood winning the majority of seats in parliament, and the two houses appointing from a Brotherhood-dominated constituent assembly that will draft Egypt’s new constitution, I am reminded of two very revealing conversations I have had with people who posses deep knowledge of the group. These discussions shed light on the Brotherhood’s past political behavior and on what the future may hold for the political aspirations of the Freedom and Justice Party.

My sources have told me that the Brotherhood conceals a kind of narcissism that leads the group to consider itself worthy of everything in this life and the Hereafter. The Brotherhood’s self-worship has led the group to neglect its oft-stated priorities, God and the Nation. Had I not known these sources to be very trust-worthy and reliable, I would have doubted the sincerity of their testimonies.

The first conversation that opened my eyes to the Brotherhood’s narcissism complex was with the great Islamic thinker, Jamal al-Banna, brother of the late Hassan al-Banna, who founded the Muslim Brotherhood. Twenty five years ago, I asked him to be a member of the Board of Trustees of the Ibn Khaldun Center, as the organization strives to have persons from all political and intellectual backgrounds represented on its board.

Although Jamal al-Banna identifies as an Islamist, he does not belong to the Muslim Brotherhood.  When I asked him why he did not join the organization founded by his brother, for whom he has such great respect, his response was similar to that of Brutus, Caesar’s close friend turned assassin, when he explained his actions to the forum:  “Not that I loved Caesar less, but that I loved Rome more.” Jamal al-Banna told me, “Yes, I loved my older brother very much, he was more than a brother to me — a teacher and a father. Freedom was one of the values he instilled in me as the source of all other values and principles.” But when al-Banna discovered that obedience is the ruling principle within the MB – a principle that he felt contradicted the value of freedom expressed in the Koran as the basis of faith [“And say: The truth is from your Lord; so let whosoever will believe, and let whosoever will disbelieve (18:29)”] he came to the conclusion that at the organizational level, the Brotherhood was no different from the Russian communist party led by Vladimir Lenin. Thus, al-Banna chose not to join the Brotherhood because the organization’s powerful narcissism impinges on the freedom of its members.

The second conversation I had confirming the self-worshiping complex of the Brotherhood was with an Islamist inmate.  A deep solidarity is found among prisoners who share the common experience of humiliation and torture, even if their values and backgrounds differ. Thus, during my two years in prison, despite my secular identity, I became very close with my fellow Islamist prisoners, whether they were takfiris, jihadists or Brotherhood members. Years later, we stayed close and many of them came to visit me during the last Eid al-Adha holiday. We discussed the jihadists’ desire to participate in political and public life and I suggested they join the Freedom and Justice Party. Surprisingly, they all had the same response: “A’udhu billah

the MB party, they all responded with the same word: “A’udhu billah (meaning, “never.”) I asked them, “Isn’t this the party that is closest to your beliefs?”  Their responses echoed the same frustrations expressed by Jamal al-Banna years ago, but they also recalled unpleasant dealings with individual Brotherhood members. The former prisoners told me that Brotherhood members they knew, despite their huge wealth, had never helped any other Islamist group in need.

They also told me that, despite the Brotherhood’s oft-repeated slogan, “Jihad for the sake of God is one of our dearest wishes,” its members have not since the first war on Palestine (1948-49) participated in any Jihad, not in Afghanistan nor in Iraq, Bosnia or Albania, even though these Islamic countries have witnessed extended conflicts.

The conclusion of the jihadists was that the allegiance of Brotherhood members is solely to their own group, and the only recipient of their charity.

One of the former inmates asked me, “Have you ever share a Ramadan meal with any Brotherhood member in the last three months of Ramadaan?”  My answer proved his point: Although I knew a lot of Brotherhood members in prison, they have never shown their generosity to me or any other non-Brotherhood inmates.

What I thought was most troubling about my conversation with the ex-jihadists was their belief that the Brotherhood will never be satisfied, not even with the lion’s share; they seek to dominate everything, whenever they can. For this reason, the Brotherhood’s ambitions won’t end with the appointment of the constituent assembly in charge of drafting the constitution. This is merely an early indicator of their desire to control all aspects of society, including the economy and culture. They will have all the keys to import, export, distribution, public offerings and, public contracts. All that will be left to others are crumbs.

If all this, or even just a part of it, is true, Egyptians who do not belong to the Muslim Brotherhood will have two alternatives in the future:  Either surrender to the will of God and the Brotherhood or prepare for another revolution to free Egypt from the Brotherhood’s despotism.

It rests with God alone to show us the right path.

Saad Eddin Ibrahim is one of Egypt’s leading human rights activists and head of the Ibn Khaldun Center for Development Studies in Cairo. Photo Credit: AFP