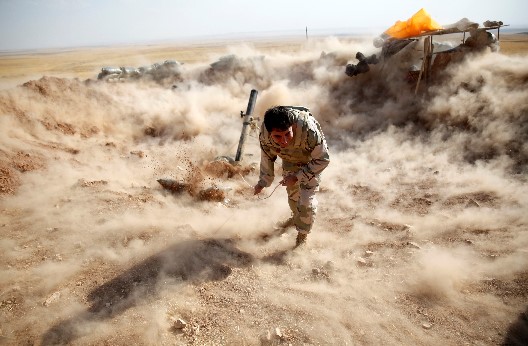 Buttressed by anti-ISIS coalition airstrikes, Kurdish forces (Peshmerga) have successfully maintained their front lines against the Islamic State (ISIS or ISIL). Both Baghdad and Washington need the Kurds to strike at ISIS in the symbolic city of Mosul, but some in the US government fear that directly arming the Kurds could encourage a future war for independence against Iraq. As one of the most effective and reliable ground forces in Iraq, the Kurds stand the best chance at consolidating the gains made against ISIS in Iraq. If done correctly, US arms could defeat the militant group back without threatening the territorial integrity of Iraq.

As one of ISIS’s major victories from its Iraq incursion in June 2014, Mosul represents a significant and symbolic city. Kurdish forces currently hold a 650-mile border with ISIS, but still lack the heavy equipment to carry out meaningful operations against the radical group with only Germany supplying the Kurds with heavy weapons capable of thwarting ISIS offensives. Only by using Kurdish territory can anti-ISIS forces surround Mosul. Direct arms could convince the Kurds to take part in operations in the ISIS strongholds of Hawija and Mosul that also threaten the Kurdish cities of Erbil and Kirkuk.

At this stage, ISIS remains much better equipped than the Peshmerga, particularly after the capture of large weapons stores from both the Iraqi and Syrian government—including 1,500 Humvees, fifty long-range GPS-guided artillery rounds, tanks, and 4000 heavy machine guns. Although airstrikes have limited ISIS advances, the lack of weapons have limited Kurdish offensives against ISIS. “The best thing we now have are MILAN [anti-tank] weapons,” says Kurdish Brigade Commander Araz Abdulqadir in Kirkuk in an interview. “But we have little ammunition, and even if we give every sector two MILANs, it does not cover all the areas we need. That’s why we need more MILANs, and more ammunition.” Kurdish Security Chief Masrour Barzani also said in a statement, “We call upon the international community to exercise its leadership role in providing Peshmerga additional military aid to reinforce our positions and defeat the enemy.”

These requests for additional support appear to resonate in both Iraq and the United States. During a recent visit to the Kurdistan region of Iraq, General David Petraeus said, “I would expect Iraqi Kurdish leaders want some more, they would feel they deserve more and I would agree with them.” On March 26, US Senators Ed Royce and Eliot Engel introduced bipartisan legislation to provide arms directly to the 190,000 strong Iraqi Kurdish Peshmerga forces fighting ISIS on the ground—a three-year emergency support act that would bypass Baghdad’s approval. Even in Iraq, Prime Minister Haidar al-Abadi recently visited Erbil for the first time and met with Kurdish President Massoud Barzani. “Our visit to Erbil today is to coordinate and cooperate on a joint plan to liberate the people of Nineveh,” Abadi said at a joint news conference with Barzani on Monday.

So long as ISIS maintains a presence in Iraq, it will continues to endanger Kurdish-held territory. The need for more support to the Kurds became evident when ISIS overran Kurdish positions in Kirkuk and in areas near Mosul. On January 29, the Peshmerga lost ground to an attack by ISIS militants, losing two commanders. Attempts by the Kurds to advance in Kirkuk in March were also hampered by a lack of anti-IED equipment and mine-resistant vehicles. Prior to that, ISIS launched a surprise attack in the Gwer subdistrict, 30 miles outside of the capital of Erbil, killing at least thirty Kurdish fighters. The attack was a warning to the Kurds not to support future Iraqi operations against ISIS-stronghold of Mosul after top Iraqi officials, including Iraqi Defense Minister, visited Gwer on January 9 to discuss an assault.

In a recent video in which ISIS beheaded three Kurdish soldiers, ISIS explicitly warned Kurds against participating in any Iraqi operations to retake ISIS-held areas. “Question yourself and your leaders,” a Kurdish ISIS fighter said in the video message released on March 19. “Is occupying the lands of the Sunnis in your interest?”

Kurdish authorities have said that they do not want to occupy Arab areas in Mosul, but would assist in any operations. “If they [West] gave us more support, we can do more damage,” said Sheikh Shahab Mohammed, a local Peshmerga commander in Gwer in an interview. But any decision to take part in a Mosul offensive would still depend on the Kurdish leadership’s decision, most Peshmerga officers say.

The Kurdish leadership is reluctant to engage in Mosul ever since the tense standoff between Erbil and Baghdad in 2008 and 2009 over control of the area. Nonetheless, a decision to arm the Peshmerga might convince them to cooperate with Iraqi troops. Kurdish forces have already cleared ISIS militants out of positions southwest and southeast of the Mosul dam. But as seen in the launch of Katyusha rockets against the Peshmerga around Erbil and Makhmour, Kurds know a safe haven for ISIS in Mosul will pose a constant threaten the Kurdish region.

Many in the West fear that direct support would only encourage the Kurds to secede from Iraq. These critics only support training the Kurds to defeat ISIS, not to pursue independence. These critics neglect, however, the military and non-military constraints on secession. The United States has only agreed to send Kurds twenty-five mine-resistant vehicles, while sending 225 to Baghdad. The coalition’s Kurdistan Training Coordination Center in Erbil also trains Kurdish forces on urban warfare and offensive operations. But without the necessary equipment, they will remain marginally helpful to the objective of defeating ISIS and helping Iraq reassert control over its territory.

Most Kurdish weapon requirements to defeat ISIS include anti-tank weapons, armored vehicles, ammunition, and night-vision equipment. While Kurdish authorities could theoretically turn such equipment against the Iraqi security forces, the proposed US legislation would expire in three years, during which time arms to support the Iraqi government could more than maintain the military balance in Iraq.

Economic factors also limit Kurdish ambitions for independence. Kurdistan’s Regional Government (KRG) still depends on sending its oil to either Baghdad or Turkey for income. Moreover, the KRG lacks international recognition necessary for independence. The KRG Prime Minister Nechirvan Barzani, in a recent Al Monitor interview, said that the Kurds do not want independence like that of North Cyprus. “We want a sustainable independence. The geopolitical situation of Kurdistan is extremely delicate. We have Turkey and Iran on our borders.”

Regionally speaking, Turkey does not fear directly supplying arms to Iraqi Kurds, as long as they do not end up in the hands of the Kurdistan Workers Party (PKK)—a group Turkey still views as a terrorist organization. Iran and Iraq would naturally prefer indirectly arming Iraq’s Kurdish forces, thereby increasing their reliance on Baghdad or on direct arms supplies from Iran (one of the first countries to support Kurdistan with arms and ammunition).

By directly arming Kurds, the United States could convince them to take part or assist in operations against ISIS in Mosul—and ultimately eradicate the group from Iraq. Arming the Kurds would not lead to independence since they lack economical means and international recognition for their independence. Kurdish independence is dependent more on political factors and support, rather their control of territory. If the United States pursues the legislation to arm the Kurds directly, it would not only help achieve the objective of degrading and destroying ISIS while keeping Iraq intact, it would also undermine Iranian influence in Iraq—a proposition that would undoubtedly improve its image among other Arab countries in the wake of the nuclear framework agreement.

Wladimir van Wilgenburg is an analyst of Kurdish politics for the Jamestown Foundation and a freelance journalist based in Erbil, Iraqi Kurdistan.