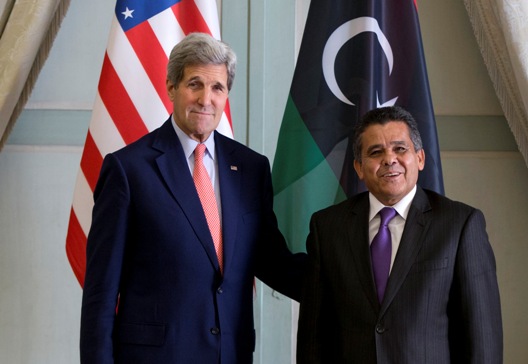 Libya is becoming increasingly polarized, as rival blocs engage in a violent political struggle for power and the country’s resources. The United Nations is attempting to broker negotiations between the elected, internationally-recognized assembly and government in Tobruk and the self-declared authorities in Tripoli. Prospects for a political solution, however, appear dim, especially as regional states throw their support behind the faction most aligned with their ideological and geostrategic interests, raising fears among other international policymakers that the conflict could spiral into a proxy war.

Foreign Minister Mohammed Al-Dairi, with the recognized government of Prime Minister Abdullah al-Thinni, visited Washington earlier this week to share his message with analysts and decision-makers about the current state of affairs in his country. The Atlantic Council’s Rafik Hariri Center for the Middle East had the opportunity to ask him about his assessment of the situation gripping Libya today.

[Operation Dignity] came into being last May within a vacuum left by the state when it comes to fighting terrorism in Libya, particularly in Benghazi. Many people in eastern Libya welcomed that move because it represented a hope that many Libyans had lost before the launch of the operation. Since August, we have a nascent Libyan army, which is being rebuilt little by little, especially in the east. In the west, there is a lot to be done. When it comes to the east, the national army started to be rehabilitated and has so far contributed to fighting terrorism in Benghazi particularly. The Libyan army now has extended its military might to the area of the fertile crescent because of Operation Sunrise – the attempt that began on December 13 to seize the oil fields.

Indeed the Libyan army has Mr. Haftar in it, but there are others who are fighting terrorism day and night in eastern Libya. And these commanders and fighters are of various military units and brigades, of various arms, the air force, infantry the marines etc., and they are all part of the Libyan national army led now by General Abdelzak al-Nadouri. But I can tell you that the issue of General Haftar has been blown out of proportion. There has been an over emphasis on the role that he plays in eastern Libya and the negative way that he has been portrayed. Someone like General Haftar who began this effort earlier, before this chamber (the House of Representatives) was elected, you cannot be disloyal and unfaithful to what he had started. But he is included in this general effort that we are all undertaking in eastern Libya.

Despite the questionable ruling of the Supreme Court[1] on November 6, the House of Representatives (HoR) came out on November 11 and said that we are all for a political solution to the Libyan crisis, and they have said that they support the only initiative on the table, which is the UN-led initiative that is spearheaded by Special Representative Bernardino Leon. Despite the new obstacles that have emerged in Libya since Operation Sunrise, despite the challenges that the operation posed politically and militarily, the HoR on December 16 issued a statement pledging once again its support to the UN-led initiative and to the political solution. So the bellicose talk that you mention, I don’t see that coming from the HoR. Here there is a clear cut commitment to the political process, to the political solution, as the viable means to bring to an end the Libyan political crisis.

It goes without saying that one of the features of the Libya crisis is that it has been characterized by strong intervention from foreign and regional powers. I said that in Paris to Al-Sharq Al-Awsat and I think this remains true. However, I would hope that the international community would support Leon’s efforts by curtailing – or by reducing – or even eradicating these negative influences that have prevailed in Libya and have been imposed by regional powers.

What matters to Libyans, as I said, is a political process that would lead to a national unity government with a political roadmap. A roadmap means that we would seek the reestablishment of a state grounded in the rule of law, including human rights, respectful of the independence of the judiciary, and the reestablishment of the national army and the police. Additionally, the political agenda should by all means encompass the need to fight terrorism. In parallel there would be a military track that would contain a timeline that would lead eventually to the disarmament and dismantling of the armed militias.

This should be indeed facilitated by the international community that should exert the required pressure on these regional powers to bring to an end their unwelcome and negative interferences in Libya. This effort by the international community to bolster Leon’s efforts and help Libya get back on its feet is needed not least because of the rising threats of terrorism in the country. Indeed, we have had ISIS supporters declare their allegiance to the jihadist group in Derna as of October 6, together with rising threats by Ansar al-Sharia and ISIS in Benghazi. And now there is Ansar al-Sharia in Sirte, launching the attacks with some groups from Operation Libya Dawn[2] against the oil fields.

I think the international community’s engagement is badly needed to support the political and military track that Leon is embarking on but also to help Libya overcome the prospects of having a country that is a hotbed for greater terrorism. Already, we have regional states like Tunisia, Algeria, Chad, Niger, Italy, France, Egypt that are complaining about the spillover effects of the Libya crisis because of the growing military capability of radical groups inside Libya. Hence the need to help Libya to fight and overtake those groups. They first pose threats to Libyans but also to the neighboring countries.

[1] Libya’s Supreme Court ruled unconstitutional the process that led to the election of the House of Representatives in June 2014, which by certain observers’ interpretation rendered the parliament void.

[2] This is the coalition of brigades from Misrata and Islamist-leaning blocs that have propped up the rival General National Congress and Omar al-Hassi government in the capital Tripoli.

Image: Secretary of State John Kerry (L) and Libyan Foreign Minister Mohammed al-Dairi pose for photographs before a meeting at the Chief of Mission Residence in Paris October 14, 2014. REUTERS/Carolyn Kaster/Pool