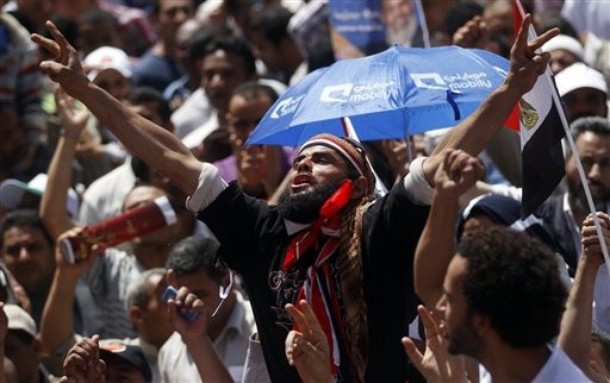 Egypt’s political map is changing so rapidly that it’s almost impossible to see the big picture, when all of the component pieces are constantly in motion. Like a chess board, Egypt’s major political players are making bold moves. Last month, the Brotherhood nominated a presidential contender after repeatedly promising for a whole year that they would not field their own candidate. In a similarly surprising development, Omar Soliman – Mubarak’s former vice president — declared that he will run for presidency, citing the support of a small crowd of protesters who gathered in Abbasiya to reject his previously announced withdrawal from the race.

But no sooner had the stakes of the presidential race been dramatically raised by these two new contenders than the Supreme Presidential Electoral Commission (SPEC) disqualified both over minor technicalities. Was the SPEC’s decision to expel 10 presidential candidates politically motivated? Egyptians are now beginning to wonder if the dramatic ruling is part of the SCAF’s master plan to retain control over the transition.

At the start of the revolution, Egyptians faced with the uncertainty of a political and security vacuum made what seemed like the safe choice by trusting the SCAF.  Even as the military’s management of the transitional period came under increasing criticism, few dared to suggest that the people and military can never be “one hand,” and it was not until May 2011 that public opinion began to turn decisively against the SCAF.

Now, with the spread of rumors that the presidential election could soon be postponed, Egyptians have finally lost patience with the SCAF’s deceptive games and procrastination. Their rage and frustration has spawned calls for a mass demonstration in Tahrir Square on Friday, April 20.

After months of speculation about an alliance between the military and Islamists, the latter are now facing their own legitimacy crisis. During the campaign season, voters were persuaded by the Brotherhood’s Freedom and Justice Party and the Salafi Nour Party’s religious-based platforms emphasizing social justice and economic security. But after embarrassing incidents such as a Salafi MP’s attempts to cover up his nose job and the polarizing debate over the nationality of the Salafi presidential candidate Hazem Saleh Abu Ismail’s mother, the virtuous image of Islamists has been tainted.

Their supporters are recognizing that Islamist politicians, too, are human beings and just as fallible. And with the presidential election rapidly approaching, it’s surprising to see some candidates still using verses from the Quran in their slogans. Beside the fact that religious campaigning degrades a divine text, it also serves the purpose of distracting voters from the need for clear and detailed policy platforms with propaganda that appeals to their emotions. Illegal religious campaigning was pervasive in the 2011 parliamentary elections, but will Egyptians now be fooled twice?

Another major trend in the leading presidential campaigns is the promise of large-scale development projects. Former Brotherhood member and presidential candidate Abdel Moneim Aboul Fotouh was the first to employ this campaign strategy with his "Project of the Homeland" initiative. The Brotherhood’s now disqualified candidate, Khairat al-Shater, soon followed suit by announcing a "Renaissance Project” to transform Egypt’s economy and society. This project has now been taken up by the Brotherhood’s back-up candidate, Mohamed Morsi, who will replace Khairat al-Shater on the ballot.

In comparison to Hosni Mubarak’s presidential campaigns – where victory was guaranteed by ballot fraud – today’s candidates are making an unprecedented number of promises for which voters can later hold them accountable. One of the most promising features of the development plans being promoted by candidates is that the projects for the most part do not rely upon a statist economic model. The focus of these economic programs is to stimulate urban renewal to create healthier and more productive cities, and most importantly, harness the tremendous energy and potential of Egypt’s youth  to fuel development projects inspired by the Turkish experience.

A significant difference between the Islamist candidates Mohamed Morsi and former Brotherhood member Abdel Moneim Aboul Fotouh is the degree of intellectual and ideological diversity within their campaign staff and supporters.  Aboul Fotouh’s constituency is noticeably broader, and includes Islamists as well as liberal and secular supporters. Meanwhile, Amr Moussa is trying to keep pace his competitors’ promises of reform and renaissance, but his well-known ties with Mubarak’s business and security cronies have seriously compromised his credibility with revolutionary forces.

While the media is focused on the short-term race leading up to the may 23-24 presidential election, important questions about the future structure of Egypt’s political system and the relationship between government and the people remain unresolved, and the lack of consensus on this issues is further delaying an already controversial constitutional process. Fears of a repeat of the 1952 coup scenario and possible postponement of elections are not entirely far-fetched, and there is growing concern that recent destabilizing incidents like the fire at the Nasr Petroleum Company in Suez were fabricated and staged by former regime elements or the security services to provide a pretext for delaying a transfer of power to civilians.

With calls for a major demonstration on Friday, April 20, after months of the SCAF repeating the same mistakes, the need for consensus and unity among Egyptians has never been more urgent. As the political crisis escalates, it seems the only possible resolution can come through cooperation across partisan and ideological lines against the SCAF and former regime remnants that remain intent on derailing the revolution.