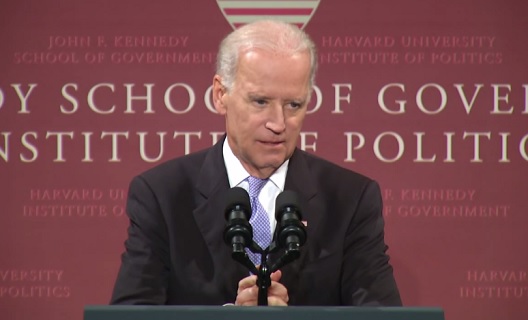 The Vice President of the United States spent part of his weekend on the phone to American allies and friends apologizing for remarks he made on Friday, October 3, at Harvard University’s Kennedy School. In response to a question about whether Washington should have moved sooner to address the crisis in Syria, Mr. Biden blamed Turkey, Saudi Arabia, and the United Arab Emirates for the rise of the Islamic State in Iraq and al-Sham (ISIS or Islamic State), saying (among other things) “What did they do? They poured hundreds of millions of dollars and thousands of tons of weapons into anyone who would fight against Assad—except that the people who were being supplied were [Jabhat] al-Nusra and al-Qaeda and the extremist elements of jihadis coming from other parts of the world.” Apologies notwithstanding, the vice president’s remarks will only reinforce baseless but persistent suspicions that there is a secret handshake between Washington and Damascus: suspicions that can undermine the anti-ISIS coalition and discourage effective action by Turkey and others.

No one would have expected the vice president to have said, “Yes, for over two years we essentially ignored the rise of ISIS, and this was largely because of our reluctance to confront the Assad regime, whose violently sectarian survival strategy was the single most important element in implanting this horrific descendant of al-Qaeda in Iraq inside Syria.”  And he deserves credit for not having blamed the mainstream Syrian opposition for everything gone wrong. Still, he gave the Assad regime a free pass, even as that regime today collaborates with ISIS in trying to destroy what is left of the armed nationalist opposition.  This is indicative not—as many in region will suspect—of sympathy for Bashar Al-Assad.  Yet it is disturbing nonetheless that somehow the leading role of the Assad regime in the rise of ISIS was not on Mr. Biden’s mind, while the mistakes of friends and allies were.

And yes, there were mistakes.  Turkey and the others are free to feel outrage over Biden’s implication of their official support for ISIS.  Still, left to their own devices by an AWOL United States they—mainly Turkey, Saudi Arabia, and Qatar—did what came naturally to them: they sought to acquire loyal employees among the opponents of the Assad regime instead of working together to build an effective, unified Syrian nationalist opposition.  In some cases they were either careless or calculating about who was allowed to pass into Syria.  In some cases Gulf Arab monarchies in particular were lax in cracking down on the more stupid of their wealthy subjects bent on sending money to jihadist savages, and in other cases they were blind to the consequences of encouraging sectarian responses to the sectarianism of Assad and Iran.

Biden was right to apologize for implying that official government policies of American partners and allies abetted the rise of ISIS.  Had he simply wanted to commit truth in a public forum, he could have said that the biggest single factor facilitating regional indiscipline and dysfunction in supplying and supporting those opposing the Assad regime was the arm’s-length policy of the United States: a policy shortcoming corrected in 2014, but one permitted to fester and fail for more than two years.  American leadership could have been the antidote to local parochialism in 2012 and 2013.  It is having a salutary effect now, at long last.  Perhaps it is not too late.

Confession is good for the soul, but perhaps less than healthy when rendered publicly with national elections looming.  It was unfortunate that Mr. Biden blamed friends and allies for Syria’s parlous condition rather than focusing on a regime—fully backed by Iran and Russia—that has burned the country and conjured ISIS to keep its seat and its ability to enrich itself with its shabiha economy.  Biden’s words will not make it easier to build and sustain a functioning coalition dedicated to the defeat of ISIS and the resuscitation of two failed states.  In particular, his decision to go after Turkey was particularly perplexing, given Ankara’s sacrifice with respect to Syrian refugees and its potential role fighting ISIS and defending the nationalist Syrian opposition.  Yet the language used need not be fatal or even permanently damaging, depending on what comes next.

It is less important that the Obama administration acknowledge past policy failures than it is to get things right now.  If Vice President Biden was simply careless in his choice of an alibi, the damage can be repaired by actions in the air and on the ground in Syria.  It is action that will demonstrate America’s strategic intent to allies and friends, not telephonic apologies.  If Biden was reflecting continued ambivalence and doubt about the ability and willingness of the United States to support the nationalist opposition in Syria against both ISIS and the Assad regime, then the anti-ISIS coalition in the region may not be sustained for long.  His remarks have raised suspicions.  They need to be put to bed, and words alone will not suffice.