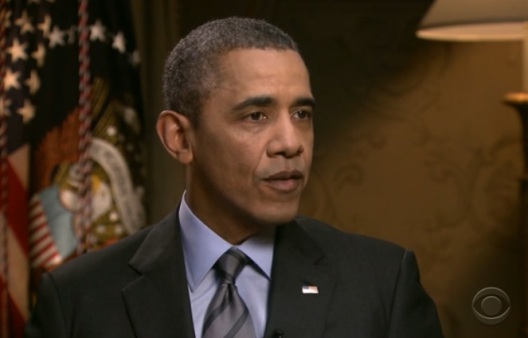 In his exchange with Scott Pelley, President Obama did not (as the Reuters account implies) literally employ the “boots on the ground” straw man to caricature the position of his critics. But he came close. After casually dismissing as a “false notion” the idea that an Assad regime stripped of its artillery, aircraft, rockets, and missiles would find it harder to commit wholesale slaughter, he segued into a rambling passage about US troops, the number of rotations they endure, and the impact on their families. Clearly the impression he wished to leave with viewers was that Syria is the mother of all slippery slopes: that a humanitarian air strike intervention of limited duration, focusing on regime delivery systems used to terrorize, kill, and scatter civilians—one relying mainly on standoff weapons systems—would lead inexorably to a ten-year military commitment.

“It is, I think, a false notion that somehow we were in a position to, through a few selective strikes, prevent the kind of hardship that we’ve seen in Syria,” Obama said. “It’s not that it’s not worth it. It’s that after a decade of war, you know, the United States has limits,” he said. Obama said the United States would have a hard time committing to putting troops on the ground in Syria, a commitment he said could have lasted “perhaps another decade.”  —President Barack Obama responding to Scott Pelley on CBS Evening News as reported by Reuters, March 29, 2014.

It may be that Mr. Obama truly doubts his own capacity as commander-in-chief to articulate, implement, and enforce a discrete military mission focused on the saving of lives. “Destroy or significantly degrade the ability of the Assad regime’s armed forces to bring massed fires to bear on populated areas.” Accomplishment of such a mission would not have been easy or error free: no application of lethal military force is without complexity or unintended outcomes. Yet it would not have required ground forces to enter Syria, much less occupy the place.

What, after all, was the president considering last August when the Assad regime crossed his chemical weapons red-line for perhaps the 15th time? Surely it was not the invasion and occupation of Syria. And surely, during the time he contemplated strikes against regime military targets, his mind was focused on “prevent(ing) the kind of hardship that we’ve seen in Syria.”

The regime, after all, had just killed some 1,400 civilians using rockets to deliver chemical munitions. It had long since been using rockets, missiles, artillery, and aircraft to commit mass murder, mainly using other sorts of munitions. No doubt it occurred to President Obama that the regime’s defiant, contemptuous, and flagrant crossing of his chemical red line gave him an opportunity to mitigate the general humanitarian catastrophe by making it harder for the regime to murder and maim in wholesale quantities. One may agree or not with what he ultimately did. Yet surely he must have thought himself capable of ordering and overseeing the execution of a military operation whose success would have (by now) saved thousands of lives and preempted massive refugee flows without necessitating invasion and occupation.

The Syrian regime has, in the wake of the September 2013 chemical weapons agreement, doubled down on a strategy combining its own war crimes and crimes against humanity with ground operations undertaken largely by foreign fighters supplied by Iran. It treated with mocking contempt the Obama administration’s attempt at diplomatic alchemy: a Geneva conference compelling the departure of a regime being borne aloft militarily by foreign fighters and Russian arms.

It is understandable that the Obama administration wishes to tell a different story entirely. It is entitled to do so. And yes, it is even entitled to exploit and even deepen the skepticism of an American public that sees chaos in Syria and wishes to keep a healthy distance. Yet the president and those who serve him should understand that people are being systematically slaughtered and starved by a regime that feels perfectly free to do so thanks to Iran, Russia, and a chemical weapons agreement that erased a credible US military option; an agreement the administration clings to as evidence of something actually accomplished on Syria. Sadly, however, no amount of clever caricature and rhetorical sleight of hand will save a Syrian child or give her parents a moment’s peace.