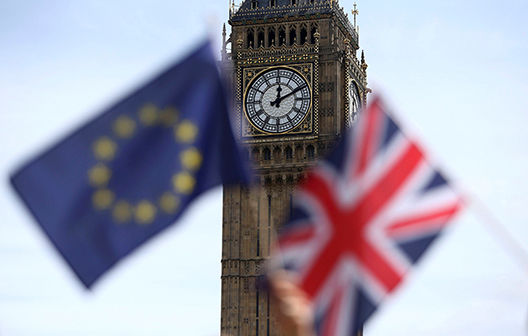 As financial markets try to regain their footing in the wake of the United Kingdom’s vote to leave the European Union (or “Brexit”), many wonder the effect the reverberations might have on the politics and economics of other parts of the world. For the Middle East and North Africa (MENA), this divorce-between-nations could potentially have a serious impact on development and foreign assistance to the region. The MENA region’s limited integration into the EU will minimize any major impact on economic dynamics, but the UK’s break with the European bloc could greatly diminish the size, coordination, and relative impact of projects that promote conflict resolution, rule of law, and development.

The United Kingdom contributes significant financial and technical resources to implement development efforts in poverty stricken regions around the world. It recently became one of the only wealthy countries in the world to reach the 0.7 percent mark in 2015 set by the United Nations for foreign assistance as a portion of gross national income, according to a study by the Organization for Economic Cooperation and Development (OECD). Second only to the United States in absolute amount donated in official development assistance, the UK contributed $18.7 billion in overseas aid. While the majority of this assistance (approximately 60 percent) is delivered on a bilateral basis, the remainder goes to international organizations such as the United Nations and the International Committee for the Red Cross. As a bloc, the EU constitutes the largest donor of foreign aid in the world, contributing $62.5 billion. Until the Brexit vote, the UK donated about $1.5 billion to the European Commission—the EU’s implementing body—for foreign aid annually. Although the Middle East and North Africa never ranked high on the UK’s priority donations list, the Syrian conflict and refugee crisis have boosted spending on the issue. As of the end of 2015, the UK government claimed it had spent in excess of 1 billion pounds to assist Syrian refugees since 2012. The UK will now regain control over that $1.5 billion in aid and redirect it according to its own national priorities, but its withdrawal from the EU means that it will no longer have a voice in deciding how the largest global donor allocates its foreign assistance—a loss to both it and the United States.

Brexit ushers in an unprecedented era of uncertainty for the UK, the EU, and the future of their foreign assistance to the MENA region. With British Prime Minister David Cameron announcing his resignation before the UK enters into two-year negotiations with the EU on the terms of the split, the question of who might lead the new government and how its foreign policy priorities will change have led to comments of reassurance from President Barack Obama and Secretary of State John Kerry that the United States and the UK remain close partners—mostly to reassure financial markets, but also to signal continuity in policy alignment. The economic turmoil in the aftermath of the vote will no doubt turn the UK’s attention in the short term toward trade relationships—particularly those negotiated as EU association agreements with countries like Morocco, Egypt, Algeria, Tunisia, and Israel.

Before the vote, the UK Department for International Development’s (DfID) 2015 aid policy review emphasized an increased response to the crises in the Middle East, aligning it with the EU’s view of its southern Mediterranean region. Now, such alignment is not necessarily a given. Some analysts describe the result of the vote as a victory for nationalists and xenophobes and a threat to the integrity of one of the pillars of the modern international order. Indeed, the attitudes associated with the “leave campaign” specifically rejected the UK as host to more refugees, which they said could bring Islamic State (ISIS) militants to its shores. Such attitudes could pressure a new British government to close its doors to refugee flows and reduce the resources spent on stabilizing the Syria, Yemen, or Libya crises. With a more inward-looking UK, one should expect its engagement with the Middle East to focus mostly on objectives affecting its own national interests—including its fight against ISIS and efforts to stem migration. This shift would lessen the previous policy emphasis on conflict stabilization and institution building in Arab countries.

Brexit also throws into question the future of the current joint UK-EU projects in the region. One British civil servant said that many aid projects remained in a state of limbo as the UK approached the referendum. With the leave vote victorious, these projects have likely come to a grinding halt. British aid workers in European countries working on MENA issues could find themselves buying a ticket home if they cannot secure special visa considerations. Neither can British companies nor NGOs any longer bid on EU contracts, hindering potentially valuable work in a region that desperately needs development and opportunity as a means to combat extremism and violence.

The political and foreign policy implications likely to be just as significant, if not more so, than the economic.

While Britain is hardly the only country in the EU with a colonial past, it has managed to translate that history into a keenly attuned and muscular foreign policy, one that takes into account its regional security and commercial interests. As far as the MENA region is concerned, the UK, closely followed by France, has had an active foreign policy and largely avoided the trap that much of Europe fell into; a pronounced, if well-meaning, confusion in the face of rapid change in the wake of the Arab uprisings. The uprisings, followed by calamitous civil wars in Syrian and Yemen, a rapidly and violently unravelling Libya and, closest to home, a burgeoning refugee crisis – the European Union barely managed to withstand one wave when it was felled by another. The EU is a little weaker, rather less cohesive, without the UK. Britain is likely to find that life is lonelier, and riskier, outside the union. And the MENA region is likely to find itself having to struggle ever harder to convince Europe that active engagement in the region will be more beneficial than isolation.

More troublingly, there is the very present possibility of a knock-on effect. It is simplistic to attribute Brexit to a rise in populism and right wing nationalism but there is no doubt that it played a role and it is part of a growing global phenomenon. Across the channel, the right wing Front National’s leader, Marine Le Pen congratulated the British people before a poster of wrists breaking handcuffs made of the EU’s stars. The caption read “Now, France!” A French exit from the EU would cripple it but strengthen the far right.  France has Europe’s largest Muslim minority population and Le Pen’s views on them are well documented. During a rally in late 2015, she declared, ““Without any action, this migratory influx will be like the barbarian invasion of the 4th century, and the consequences will be the same,” A France led by the far right is not one likely to invest, partner with or attempt to solve problems in the Middle East.

Ultimately, Brexit spells a loss for all involved in the short and possibly medium term. Most of all it deals a blow to the spirit of cooperation and collective action not only to face challenges in the Middle East, but globally. The UK has lost a say in a powerful economic and development bloc, the EU has lost a strong international member with considerable knowledge and technical expertise, and communities in the MENA region have lost some hope in a brighter future through international assistance. While such assistance will undoubtedly regain its footing as the UK and the EU find a new working relationship over the next few years, the loss of valuable time and resources for a region still reeling from conflict and turmoil will cost more lives and more refugees will flow to Europe and the UK’s doorsteps.