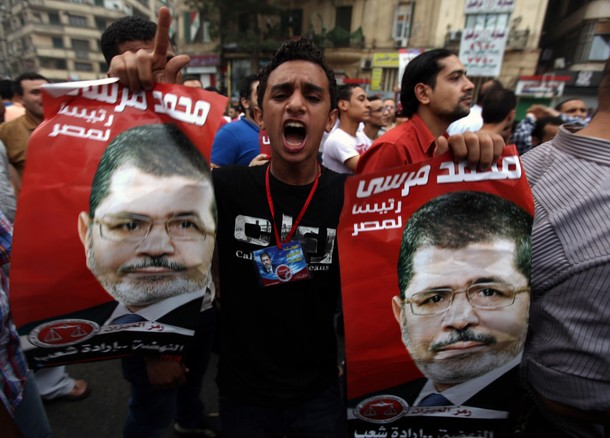 On June 18, the Muslim Brotherhood claimed victory for its presidential candidate, Mohamed Morsy, with 52.5 percent of the vote compared to Ahmed Shafik’s 47.5 percent, with almost all votes counted. The announcement came just hours after the SCAF issued amendments to the interim constitution that undermine presidential powers while giving the military legislative authority in the absence of an elected Parliament and immunity from civilian oversight.

Although final election results are not expected until June 19, Morsy has already given a preliminary victory speech, in which he thanked God for guiding "Egypt to this straight path, the path of freedom and democracy.” Morsy vowed to represent all Egyptians, including those who had voted against him, as well as Coptic Christians. However, Ahmed Shafik’s campaign has accused the Brotherhood of calling the game too soon, predicting that Shafik is still on track to win the presidency with an estimated 51 to 53 percent of the vote. Shafik’s spokesman, Ahmed Sarhan, accused the Brotherhood of trying to deceive the public before all of the ballots have been counted: "Morsi’s campaign is spreading fake news of victory in order to be able to claim vote-rigging when Shafik wins."

Morsy’s likely victory escalates a looming confrontation between the SCAF and Brotherhood over the former’s unilateral intervention in the constitutional process and usurpation of legislative powers following the dissolution of Parliament by a Supreme Constitutional Court ruling last week. The Brotherhood-affiliated speaker of the Parliament, Saad al-Katatny, has already challenged the decision, claiming that the military has no right to appoint a new constituent assembly (which it did on June 18, according to media reports) or dissolve Parliament, which can only be done through a popular referendum, Katatny said, citing historical precedents in 1987 and 1990.

Although the SCAF has deployed military and riot police to bar law-makers from entering the Parliament building, the leader of the Brotherhood’s parliamentary bloc warned that MPs would arrive for their next session, scheduled for June 19. Meanwhile, Saad al-Katatny revealed that Parliament has selected its own 100-member Constituent Assembly to write a new constitution, which will begin meeting shortly to draw up a draft for the new charter. After mililtary police barred two MPs from entering the Parliament building on June 15, the head of the legislative affairs committee, Mahmoud Khodeiry, said that law-makers were already making plans to convene elsewhere if necessary — reminiscent of the short-lived "hotel Parliament" that began meeting in Cairo’s Continental Hotel after the 1925 Wafd-led Parliament was dissolved by royal decree.

Morsy’s expected victory will give the Brotherhood more leverage to oppose the dissolution of Parliament, whether or not they have legal grounds to do so. Mokhtar El Ashry, head of the legal committee of the Brotherhood’s Freedom and Justice Party (FJP), said the party had been banking on Morsy’s victory to fight against the dissolution of Parliament, citing precedents in Egyptian law that empower the president to settle disputes between the branches of government.

But it is too soon to declare victory for the Brotherhood, which is already being assailed with allegations of electoral fraud from the campaign of the losing candidate, Ahmed Shafik, as well as the judges supervising the election. Shafik has not yet conceded to Morsy, but his campaign manager issued a written statement accusing the Brotherhood of a range of "systematic election violations" including tearing down Shafik posters, bribing and intimidating voters, and ballot fraud. Meanwhile, supervising judges — the vast majority appointed under Mubarak’s rule –held press conferences during the voting process apparently aimed at deterring voters from supporting Morsy.

Before the polls had even closed, supervising judges accused the Brotherhood of infiltrating an official printing facility to produce counterfeit ballots pre-marked for Morsy, a rumor that was later dismissed by state media. Hatem Bagato, the general secretary of the Supreme Presidential Electoral Commission (SPEC), publicly accused the Brotherhood of planning violenace after three of its members were arrested outside of a polling station in possession of a laptop computer containing images of foreign military training operations. The Brotherhood has since denied any connection to the laptop’s owners or any plans for violence and threatened to sue the SPEC for violating electoral regulations by defaming Morsy during the polling process.

But the allegations, whether true or not, suggest that Morsy’s narrow margin of victory — if confirmed by the electoral commission — could by challenged very soon.

Mara Revkin is the editor of EgyptSource.