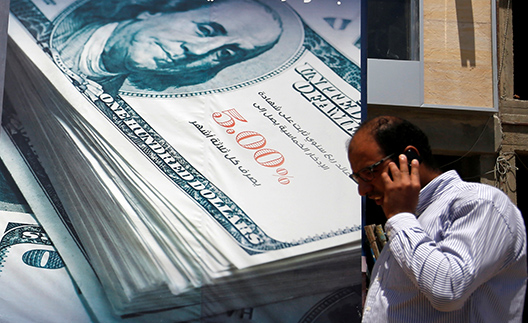 A man talks on his mobile phone as he walks in front of the construction of a new bank building covered with an image of the U.S dollar in Cairo, Egypt July 26, 2016. (Amr Abdallah Dalsh/Reuters)

In the past five years, Cairo’s rulers have been involved in discussions with the IMF for a program three times. It has never been closer than it is now to signing off on one – but that does not mean that the challenges have suddenly disappeared. On the contrary – they are potentially larger than ever.

What an IMF Program Means

An IMF deal is not a sign of a healthy economy. On the contrary, even for those that support IMF programs on principle (and political disputes exist around that principle worldwide), an IMF deal is representative of a difficult economic situation at best. As one academic in the country recently put it, “The IMF is the ‘lender of last resort.’ It was designed to rescue countries that are about to go bankrupt.”

Egypt, objectively speaking, desperately needs two things: economic reform and financial assistance. That is not in doubt, nor should it be debated – the argument rather is about how to enact that reform and over what time frame.

The quandary is how to break out of the prevailing status quo with minimum damage. That damage will be disproportionately borne by those who can handle it the least – in other words, the more vulnerable and poorer sections of Egyptian society. And the demographics in Egypt in this regard are not encouraging. According to the UNDP, more than 26 percent of the population lives below the national poverty line; according to CAPMAS (the government’s official statistics agency), poverty can be used to describe the situation of half of the entire Egyptian population. That worsens when you consider youth demographics. Youth represent around 24 percent of the population, with 26 percent of them unemployed and 51 percent suffering from poverty according to official figures released by the Egyptian government.

A fully reformed and healthy economy would include value-added-tax or something approximate to it, a freer Egyptian currency, and a reduction in the unsustainable subsidies that currently underpin so much of the economy. And as Amr Adly, a Carnegie and AUC scholar notes, there would be a more thoughtful re-evaluation of Egypt’s dependency on oil. Immediate state intervention could address all of that today – but the impact on society at large would be tremendous. It is clear that reforms to an economy heavily buttressed by subsidies and direct state intervention will have a deeply troubling effect on already vulnerable sections of the population.

There were several points in time when these reforms might have been relatively easier to envisage. The most obvious was directly following the ending of Hosni Mubarak’s rule in February 2011 – the overwhelming public support given to the military council (SCAF) at that point meant had the military leadership attempted to engage in a genuine reform program, whether in terms of reforming the economy or other sectors, they would have probably managed to do so with a minimum of a backlash. Such was the public mood – and, indeed, the SCAF did enter into discussions, but ultimately abandoned them.

The second opportunity may well have been a few months after the election of former president Muhammad Mursi – it’s now easy to forget that even in September of 2012, he still had the opportunity to forge a consensus with other elements of the political establishment. It might have been difficult to match the support given to the military leadership in the early months after the uprising in 2011, but Mursi might have been able to reach a substantial majority of support that would have allowed those reforms to pass without wide-scale opposition.

Finally, in the aftermath of the presidential election of 2014, which brought former defense minister and military officer Abdal Fattah al-Sisi to office, there might have been another opportunity to engage in reform. Despite international and local criticism of Egypt’s human rights record, when Sisi was first elected, it seemed clear he had a substantial amount of popular support. That wasn’t capitalized upon enough. A first step in reducing subsidies was taken just a month after his election, without provoking large scale opposition – but the difficult reforms stalled. While the absence of opposition to those reforms is also likely linked to the overall shrinking of political space in the country and a highly restrictive protest law, it is now likely his support base has reduced significantly.

But this is not simply about economic realities – but political ones. Implementing any reforms in Egypt will require a certain amount of political leadership and will. Not simply the initial decision, which appears to have been taken—but leadership in following through, and ensuring that the state bureaucracy implements the needed reforms. In its current political set-up, that is a problem in and of itself, as Egypt’s ‘regimen of non-regime’ is not particularly geared up for joint action. Egypt will need a heavy internal political commitment from the highest levels within the state to push through on reform measures, with the presidency openly throwing its weight behind process, and particularly with the armed forces, the most powerful institution in the country, openly giving its political backing every step along the way.

Engaging in economic reform, however, during the core summer months (June, July, early-mid August) is hardly advisable. The economic pressures on the country intensify in those months owing to energy consumption and Ramadan (the most expensive month of the year). If economic reforms have to be engaged in, then it is best to begin after that point, and no later than January, so that the country’s population is able to at least relatively adjust to the impact, before those core summer months roll back.

Cairo ought to consider a social security net important in and of itself, but the reality is that it hasn’t been willing or able to do so thus far. Providing a buffer of support for the most important of social services is not an optional luxury, but a necessity to ensure a continuation of relative stability within the country. Egyptians have been through a great deal over the last five years, and they will go through more – at least cushioning the blow economically ought to be considered a national imperative.

While these reforms will tackle the existing poor economic situation, beyond that is the additionally, and arguably far more important long-term issue of educational reform. Egypt won’t be able to provide able entrants into the work market without that – and Egypt’s educational arena has faced increasing difficulty over the last few decades.

This current parliament also suffers from a large number of problems, and the elections that brought it into existence were remarkably problematic. While the representational value of the parliament is not without complications, ignoring the parliament altogether in favor of a unilateral executive decision vis-à-vis any reform program prior to a IMF deal or is not a better alternative. Rather, parliamentary sign-off ought to be sought.

Finally, and this is a recurring issue for Egyptian politics more generally since 2013 – the political arena needs to be opened up. The clamping down of political space only means that when there are issues of serious consequence, the political environment becomes akin to a pressure cooker. There will be real grassroots consequences to any reform program, and Egypt needs to weather that civic disagreement as best as it can – and the continuation of such a closed political space does not help in that regard.

It is also a reality that if international rights organizations remain deeply critical of Cairo’s human rights records, there will almost certainly be international pressure applied on the IMF to halt cooperation. Failing to resolve those complaints and critiques may have critical economic consequences that cannot be afforded – and if further deterioration in this regard takes place, the IMF may find it difficult to ignore that pressure.

Egypt’s rulers to date have known that any reform would first hit those poorest sections – but have been unwilling to begin such reforms, delaying the inevitable – and the inevitable is just becoming worse with time. The best Egypt can hope for is to minimize the difficulty and damaging repercussions, and shorten the amount of time they last.

The situation is difficult, and it would be easier to not have to address the economic problems at this point – but the reality is that delaying indefinitely will make the problems more difficult to address. And as the last five years have shown, societal impacts emanating from economic pressures can lead to rather unpredictable political ramifications.