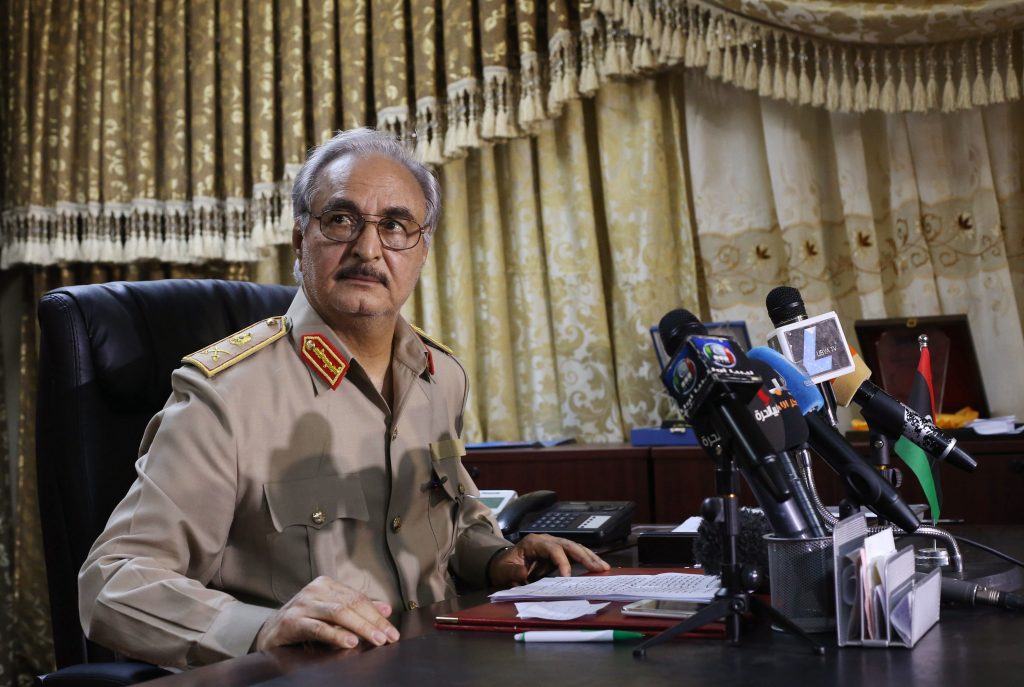 Libya was thrown into further flux this past week amid reports of the death of Field Marshal Khalifa Haftar. His exact condition remains unclear; Haftar was reportedly hospitalized in Jordan after suffering a stroke before falling into a coma after his transfer to a hospital in France. Other sources reported that eastern strongman passed away while in Paris. Reports of his death, while unconfirmed, will significantly impact the calculus of Libya’s major players, both domestically and regionally. Haftar’s death could serve as an opportunity to revive political dialogue, but it could also trigger an escalated conflict between Libya’s competing factions that would further fragment the country.

As Haftar consolidated his strength in the east over the past few years, the strongman increasingly dismissed the UN-backed Government of National Accord (GNA) and the Libyan Political Agreement (LPA). On the second anniversary of the LPA signing in December, Haftar announced that the agreement—and the legitimacy of the institutions established under it (read: GNA)—had expired. He claimed the Libyan National Army (LNA) to be the “sole legitimate institution in Libya.” Although he pledged to run in upcoming UN-backed presidential elections, Haftar also warned that he would declare himself the president of Libya if the elections “failed” (i.e., if he were to lose the vote). Similarly, immediately following his meeting with GNA chief Fayez al-Serraj in Paris in mid-2017, Haftar accused the unity government of being in “the grip of terrorists.” With Haftar dead or incapacitated, the GNA could therefore seek to renegotiate with the eastern parliament backed by Haftar, the House of Representatives (HoR), and push for ratification of the LPA.

Key figures in the LNA attempted to head off rumors of Haftar’s death to forestall the LNA’s fragmentation. HoR President Agileh Saleh released a statement claiming regular contact with Haftar; LNA spokesperson Ahmed Mesmari reported that Haftar was in “excellent health.” Notably, the UN’s Special Representative of the Secretary General in Libya Ghassan Salame did not respond to rumors of Haftar’s illness directly, but in a statement said he had spoken to Haftar by phone. Efforts to avoid new fighting in the east, however, may prove futile.

Haftar’s death or incapacitation would produce a leadership vacuum on which his rivals will almost certainly seek to capitalize. Haftar brought a number of disparate forces together under the umbrella of the LNA, including various southern and eastern tribal militias and hardline Salafists. Absent his leadership, this ragtag group of fighters may well collapse. Amid news that he had fallen into a coma, aggrieved fighters operating under the LNA’s umbrella reportedly attacked LNA offices in Benghazi. Tensions could also escalate between Haftar loyalists and those in Benghazi who oppose the dominance of Haftar’s Furjan tribe, as well as Benghazi residents unhappy with the growing presence of Salafist fighters backing Haftar in the city. LNA Chief of Staff Abdul Razzaq al-Nazhuri lacks the necessary authority to maintain order should clashes erupt—an unwelcome eventuality as the LNA wages an offensive against the last eastern holdout of militant groups in the city of Derna.

Islamist groups, in Haftar’s crosshairs since 2014, could also seek to launch an offensive against a weakened LNA. It is yet unclear, however, who could lead Islamist forces given their consistent defeat and fragmentation in the east. Successive defeats by the LNA in 2017 forced the Benghazi Defense Brigades, which had been a leading force in the fight against Haftar’s anti-Islamist Operation Dignity, to withdraw its positions and disband. A more likely scenario is that existing fractures in Haftar’s coalition will emerge and cause the LNA to splinter. The resulting security vacuum would inspire more extremist groups, including the Islamic State (ISIS, ISIL, Daesh), to reclaim lost influence.

Renewed chaos in the east could also imperil Salame’s action plan for Libya. Salame hopes to organize elections in Libya by the end of 2018—an ambitious timeframe considering the lack of domestic consensus on political reconciliation. A worsened security situation on the ground would preclude the organization of safe, legitimate elections. At the same time, other controversial Libyan figures who have expressed interest in participating in presidential elections, including Muammar al-Qaddafi’s son, Saif al-Islam, could seize on the opportunity afforded by an emptier electoral field to strengthen still-shaky political positions.

These internal dynamics naturally fall prey to the interests of regional players as well. Ever since Haftar launched his war on Islamist factions in 2014, Egypt, the United Arab Emirates (UAE), Qatar, and Turkey—and Saudi Arabia to a lesser extent—have competed for influence over Libya’s political future. Until now, these forces have balanced each other out, resulting in a stalemate that allowed these countries to put Libya on the back burner. Other regional priorities such as the wars in Syria and Yemen, the discord among Gulf Cooperation Council members, and the courting of larger geopolitical players have taken precedence over a relatively stable arrangement in Libya. Yet the arrangement depends on Haftar’s continued leadership. His death or incapacitation would shake this dynamic, once again opening the door to increased uncertainty.

Egypt and the UAE have made no secret that they view Islamists as an existential threat to a stable regional order. The UAE fully supports Sisi’s campaign against Islamists in the region, providing financial support to the Egyptian government to that end—not to mention its own measures against proponents of political Islam in its own country. Both governments undertook a semi-covert operation in Libya, launching airstrikes against Islamist militias in support of Haftar’s forces in 2014 (though they publicly denied any involvement). Albeit less of an intervention on Haftar’s behalf, Egypt also launched attacks against ISIS targets in retaliation for the killing of Egyptian Christians in 2015. No such dramatic action has taken place since that time, but the UN’s as yet unpublished 2018 Libya Sanctions Committee report accuses both countries of ongoing violations of the arms embargo by training and supplying anti-Islamist forces, according to some leaked excerpts. These policies suggest that Egypt and the UAE would intervene again militarily if they view a post-Haftar Libya as too favorable to Islamists in the country.

Turkey and Qatar have traditionally tended toward a more Islamist-leaning stance, but both countries have their hands full with their own regional problems. Turkey’s President Recep Tayyip Erdogan has maintained an open-door policy toward Muslim Brotherhood exiles and publicly attacked President Sisi for his policies against Islamists. Turkey’s support for rebel Islamists in Syria have also been thoroughly documented. Qatar’s attempt to extend its regional influence, in part through engagement with Islamists and jihadist groups, inspired it to bet on Islamists in Libya as well. Yet today’s dynamics severely hamstring their ability to offer any meaningful assistance. Turkey is heavily engaged on multiple fronts with regional and geopolitical actors in its attempt to control its border with Syria, its campaign against Kurdish forces, and its tensions with the EU and NATO over refugees and security. Given this overextension, Libya likely falls low on Turkey’s priority list. Likewise, Qatar has incurred the ire of its Arab Gulf neighbors (mainly Saudi Arabia and the UAE) due to its Islamist-leaning and independent foreign policy choices. The tension has led to a diplomatic crisis and partial blockade on Qatar’s borders since June 2017, limiting its capacity to provide aid to Libyan Islamist forces.

The overall dynamic points to emboldened factions within a weakened LNA with a temptation to defect and push their own agendas. Regionally, anti-Islamist forces have a greater desire and ability to act in support of the LNA and HoR to defend their position. If Islamist militias choose to attack, the likelihood remains high that Egypt and the UAE would intervene militarily. Even if military action were off the table, their stance toward Islamists highly incentivizes them to act as spoilers for any political agreement that would increase their power or influence. The confluence of factors points to an increasingly destabilized Libya that could erupt into more death, insecurity, and displacement, opening the door to more refugee flows across the Mediterranean and the conditions that could allow terrorist groups to thrive once again. How then can Libyan and international actors prevent this doomsday scenario?

The answer lies in UN Envoy Salame’s ability to make headway on negotiations between the GNA and the HoR, which will have the colossal responsibility of trying to maintain order in the east if the LNA disintegrates. Salame will also need to convince Egypt and the UAE that any attack from fringe Islamist groups would not warrant military intervention. If successful, he might just manage to maintain enough security for credible elections to take place and create the space for the GNA and HoR to negotiate the implementation of the LPA. To succeed he will require an unprecedented amount of support—public and private—from UN Secretary General Antonio Guterres and member states. Despite this hope, Salame has the slimmest of chances for success. Parochial interests in Libya will more likely clash in a series of events that would carve out fragmented fiefdoms in a localized power struggle. Nonetheless, even a small window of opportunity to secure a better future for Libyans is better than none.

Elissa Miller is a nonresident fellow at the Atlantic Council’s Rafik Hariri Center for the Middle East. Twitter: @elissafmiller

Tarek Radwan is a consultant for the Atlantic Council and an independent Middle East analyst. Twitter: @tradwan

Image: General Khalifa Haftar attends a news conference at Benina air base in Benghazi May 24, 2014. Haftar, a former Gaddafi ally who split with the autocrat in the 1980s, is the latest player to emerge in Libya's network of former fighters vying for control over parts of the country. REUTERS/Esam Omran Al-Fetori