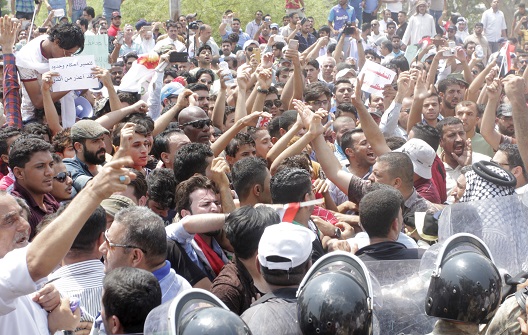 The trajectory of Iraq remains uncertain two months after the May 2018 Parliamentary elections in which the political bloc led by Muqtada al-Sadr won the greatest number of seats. Given that the Alliance Revolutionaries for Reform, or Sairoon, fell well short of a majority, Sadr must develop a coalition with other parties to elect a prime minister and form a government. While possible alliances with Shia, Sunni, and Kurdish parties dominate the news, whether Sadr delivers on his campaign promise of improving service provision may prove most critical to maintaining his substantial popular support.

July 9 protests over power outages in neighborhoods from Basra to Baghdad put pressure on Sadr to form a government capable of providing reliable energy to its citizens – an issue that has plagued the government for decades. Since 2010, Sadr has repeatedly echoed the Iraqi people’s demands for reliable electricity. If the Sadr government fails to improve the provision of electrical power, the former amplifier of protestors may find himself the target of demonstrations.

Yet, Sadr’s commitment to fight corruption and replace politicians with technocrats may well-position his government to reform the electricity sector. Ministries led by experts in their relevant fields could develop a new and robust power grid that exploits renewable energy in addition to oil and gas to satisfy the energy demands of Iraq for the first time in decades.

Despite Iraq having the second largest oil reserve in the world, the country’s energy generation has fallen short of its potential since 1958 due to poor planning and fallen short of demand since 1991 from damage during the Gulf War. Iraq’s energy demand will likely continue to increase with population growth, urbanization, and industrial development. Meanwhile, the estimated $40 billion that the Iraqi government has spent to reform the electricity sector since 2004 has done little to generate more energy due to corruption and mismanagement.

Electricity demand spikes during hot summer months leading to increased outages. In turn, outages are particularly frustrating to citizens amid scorching Iraqi summers. Outages routinely incite major protests during Iraqi summers such as those in 2010, 2015, and 2018, spurring calls for both improved services and an end to government corruption.

Sadr is routinely at the forefront of demands for improved service provision, which includes electricity. Sadrist supporters organized the demonstration in Basra in 2010 with thousands of protestors. When Sadr returned from self-imposed exile in 2011, he identified reliable electricity as a basic service which the Iraqi government is required to provide. In August 2015, Sadr called on his followers to “merge with other protesters in a single, national Iraqi crucible” demanding reliable electricity in the streets of Baghdad.

Iraqi protestors have drawn a link between electricity shortages and government corruption. Consistent with this, electricity provision may provide a tangible marker against which Iraqis will measure whether Sadr fulfills his anti-corruption commitment in the coming years.

The potential of renewable energy for Iraq

The existing electrical grid in Iraq is inadequate to generate and distribute sufficient energy for both household and industrial needs. A vastly improved electrical sector is necessary not only to meet the demands of the Iraqi people for electricity provision, but also to enable needed economic development after decades of war.

With the second largest oil reserve in the world, a revitalized Iraqi energy sector may be able to rely exclusively on oil-generated electricity. However, the oil-production system itself is highly energy-intensive; therefore, exclusive reliance on oil may not be economically efficient. Further, increased use of renewable energy is consistent with the Iraqi government’s commitment to reduce carbon emissions and meet self-identified Sustainable Development Goals.

A hybrid energy system that integrates renewable energy with oil and gas-generated electricity could alleviate the electricity crisis in Iraq. A history of research into solar energy, dating back to a 1973 energy crisis in Iraq, repeatedly concludes that long days of sunshine and high temperatures make Iraq particularly favorable for solar power generation. Researchers have also identified regions favorable to wind-generated power, along with other promising renewable energy sources.

The Maliki and Abadi governments have taken some steps toward renewable energy development. The government announced plans to invest $1.6 billion in solar and wind energy in 2012 and worked with the UN Development Programme (UNDP) to construct limited residential and utility solar power systems. The UNDP also worked with Iraq to improve the renewable energy investment environment and to plan for sustainable development in areas liberated from the Islamic State (ISIS or ISIL). Meanwhile, shop owners are increasingly turning to rooftop solar panels in Baghdad to supplement electricity from the unreliable Iraqi power grid.

Small-scale projects and rooftop solar, however, will only satisfy energy demands for a limited number of Iraqis. Government-wide planning is necessary to develop an economically efficient hybrid system that uses the appropriate type of energy based on local conditions, skill level of operators and maintainers, and energy storage opportunities.

The Iraqi government will face challenges to energy sector development regardless of the energy source. The Abadi government is promoting the removal of regulatory barriers and tax breaks to attract private sector investment in industries including solar power generation and research. Iraq is also touting a renewed level of security after the defeat of ISIS to encourage investment.

Beyond these inhibiters of private investment that many countries face, the long-standing energy deficit in Iraq has created unique, practical concerns such as whether build-own-operate contracts will generate positive returns given a perception that many Iraqis do not pay their electrical bills. In reality, widespread electricity bill delinquency may continue as long as electrical power remains erratic.

An opportunity to fulfill campaign promises

On June 12, Sadr announced a political alliance with the second-place Fatah list, led by Hadi al-Ameri of the Badr Organization and closely aligned with Iran. Sadr asserted the “new alliance is a nationalist one” for the benefit of the Iraqi people, but the alliance gives pause to many in Sadr’s base who see it as acquiescence to Iran and contrary to his Iraq-first pledge. While the subsequent alliance with Prime Minister Haider al-Abadi is less controversial, Sadr will have to convince diverse ethnic, religious, and political groups that he remains committed to his pledge to form a government that benefits all Iraqis in order to maintain Sairoon-party unity and to expand the coalition.

To demonstrate this, Sadr can take steps to reaffirm his commitment to reform the energy sector alongside coalition-building negotiations. While Sadr rejects foreign interference in government formation, he welcomes assistance in improving services to include energy provision in Iraq. Sadr can prioritize electricity provision in discussions with world leaders, engage with protestors to demonstrate attentiveness to their demands, and explore candidates to develop a hybrid energy system that can finally meet the energy demands of Iraq.

While energy sector reform is a lengthy and challenging endeavor, steps toward provision of reliable energy will strengthen Sadr’s position to form a government and, if successful, could fulfill the most ambitious of Sadr’s pledges: to create a better country for all Iraqis.

Image: Iraqis shout slogans during a demonstration against power cuts and water shortages in Basra province, Iraq, August 1, 2015. Hundreds of residents of Iraq's southern oil-city of Basra demonstrated on Saturday over frequent electricity cuts and poor quality of water, demanding better services from the government. More than 600 people waved banners as they protested in front of the governor's office to demand a solution to the long-running problems of extended power cuts and salty tap water. REUTERS/Essam Al-Sudani