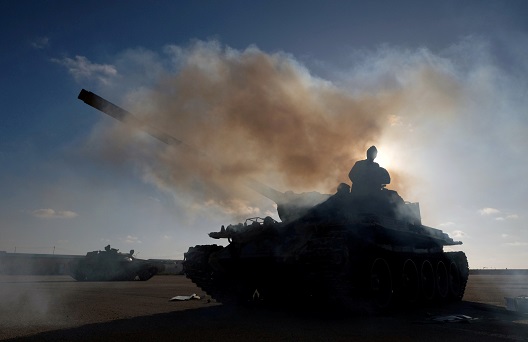 For the last four weeks, the Libyan capital of Tripoli has been the latest battlefield in Libya’s on-and-off war of the past five years. However, this time it is very different. It is on a much larger scale than ever before and for very different motives. Khalifa Haftar’s forces marched all the way from Benghazi to take over and force his role on Libya and become its dictator at large.

In February 2014, Haftar attempted a coup d’état against the first elected parliament in Libya (the General National Congress). This failed coup led to “Libya Dawn” a battle that was fought in Tripoli to expel the factions that supported Haftar’s coup d’état out of the international airport and other major installations within the capital. During that battle, United Arab Emirates (UAE) airplanes attacked the Libya Dawn fighters in Tripoli in what was a clear violation of Libya’s sovereignty and international laws, leaving tens of casualties. Haftar then shifted his focus to the east of the country and started his “Operation Dignity” campaign. He attacked Benghazi under the pretense of fighting terrorism. This war continued for more than four years and resulted in the killing of more than ten thousand people, with most civilian casualties. His “Operation Dignity” resulted in the destruction of nearly 30 percent of the city and more than a quarter million of Benghazi’s residents fled the city. The majority sought refuge in the west in Misrata and Tripoli.

The war on Benghazi allowed Haftar to take control of most of the eastern part of the country. His war campaign was carried out with extensive military and financial support from regional countries, namely the UAE, Egypt, and Saudi Arabia as well as several major powers such as France and Russia. In fact, French soldiers fought alongside Haftar’s forces and several were killed in 2015 in Benghazi. He also attacked the city of Dernah with support and direct involvement from the Egyptian Air Force. During these wars, Haftar and his followers committed war crimes against civilians. Mahmoud Warfaly, one of Haftar subordinates, carried out public summary executions in Benghazi. Warfaly is now wanted by the International Criminal Court for committing crimes against humanity.

Since 2011, Haftar has not attempted to conceal his intention and ambitions to rule Libya as an ultimate dictator, and to get rid of the fledgling democracy that has been emerging since the overthrow of the Qadhafi regime. His success in controlling the eastern region of the country and the international support he received encouraged him to move on in taking over Tripoli as the final push to achieve his ultimate goal.

On February 23rd of this year, a meeting was held in Abu Dhabi, UAE, between Fayez El-Sarraj and Khalifa Haftar in the presence of the UNSG special representative Ghassan Salameh and the US Ambassador to Libya Peter Bodde. It was at this meeting that the parties agreed to share the power between Sarraj and Haftar. The former would stay on as the head of the Presidential Council and Haftar would become the Minister of Defense and Head of the National Security Council. Additionally, the two would share the cabinet assignments 50/50. This agreement was never made public. The UN had planned a National Conference that was to be held in the city of Ghadamis between April 14th and 16th. The purpose of this Ghadamis conference would have been to finalize a peaceful solution, establish a roadmap leading to general elections and a transitional government based on the Abu Dhabi formula.

However, on March 27th, Haftar visited Saudi Arabia and then Egypt. According to the New York Times, he told Saudi Arabia’s King Salman about his plan of invading Tripoli and requested support and blessings for his operation. As a result of his visit, the Saudi’s gave Haftar tens of millions of dollars to support his operation. On the morning of April 4th, Libyans woke up to the shocking news that Haftar’s militias, the so called “Libyan National Army,” were fifty miles away to the south in the city of Gharyan and positioned to enter Tripoli in an effort to take over the city. Thousands of soldiers, tanks, rocket launchers, artillery and armed vehicles started marching towards Tripoli.

As the news reached Tripoli, the Western and Central Brigades of the Libyan Army of the Government of National Accord immediately pledged to defend the city from the invaders. Furthermore, the armed groups based in Tripoli and Misrata joined them to defend Tripoli. In the following days, Haftar’s militia attacked Tripoli from the south in Wadi Alhira, Azizia and militias from Terhuna attacked the southeast suburbs of the city. These attacks resulted in hundreds of casualties; many were killed by the random artillery shilling on densely populated civilian areas in the city. In the last week, there was a massive retreat by Haftar’s militia after suffering defeat in many of the battles.

Where the International Community Stands

Since the overthrow of Qadhafi’s regime, the international community has played a mixed role in the Libyan scene. Several countries heavily intervened in Libya, among them are the UAE, Egypt and Saudi Arabia, who have supported Haftar financially and militarily since 2014. On several occasions, the UAE and Egypt were directly involved in military actions in Libya. France has been a staunch supporter of Haftar and has approved his attack on Tripoli. Furthermore, France hosted a meeting between Sarraj and Haftar last year, during which they proposed a framework for their collaboration and gave Haftar international legitimacy.

What are the Expected Scenarios?

The war on Tripoli campaign can take several paths in the coming days and weeks. The war could continue between the two factions with no clear winner. In this case, several scenarios can take place. Both parties could run out of ammunitions and arms and the war will become, more or less, a standstill with few skirmishes. At this point, the primary goal would be to hold onto the positions that they have already secured.

On the other hand, Haftar supporters, the UAE and Egypt, who were emboldened by Trump’s latest position, might use their air forces to attack the GNA forces around Tripoli to give an edge to Haftar’s militia on the battlefield. This will result in huge civilian casualties and destruction. The attack on Tripoli will become similar to what has happened in Benghazi.

Haftar’s forces will obviously lose the battle so the following might happen.

The international community, under pressure from Haftar’s allies, will intervene to stop the war before the complete defeat of his forces. The international intervention will not include the condition of Haftar’s complete withdrawal from the western region and go back to its original bases. This will give Haftar a position on the ground that will allow him to be a player in any future political solution. Conversely, a major military intervention by his allies may also occur.

Currently, most of Haftar’s militias are primarily composed of fighters from tribes in the eastern region of the country. These tribes have supported Haftar for several years willingly or otherwise. As of recent, they have started receiving the bodies of their children who were killed in this war, which they were neither consulted on nor supported. This might cause these tribes to withdraw their support and move against Haftar. This will lead to the withdrawal of the fighters, collapse to his campaign, and the end of his role.

The war might be played by the separatist as a war between the historical regions of Libya: Barqa (Cyrenaica) and Tripoli (Tripolitania). This will lead to the increased tension and the tear of the social fabric, which might lead to the fragmentation and split of the country. This would meet the goal of some of the major countries of the region who have been trying this for a while as part of reshaping the Middle East. This could result in an all-out war for many years to come because of the entangled interests and resources of the country. The most probable outcome is Haftar forces lose the war and his supporters abandon him. This will put him out of the Libyan political and military scene.

Most of these scenarios will further complicate the Libyan problem, leading to more bloodshed, destruction and violations of human rights. Haftar will not be able to take over Tripoli regardless of how much support he might get. The only possible way to end this senseless war is if the international community, under the leadership of the United Nations with serious commitments from the United States and United Kingdom, intervenes by forcing Haftar to stop his attack on Tripoli and withdraw the remainder of his forces to their original barracks. The United States clearly needs to reevaluate its policy towards Libya and support the path to democracy not to the return of the military rule. Then, the UN can resume its plan to hold the General Conference with a different approach to its attendance, limiting it to only those who are serious about establishing a civil state.

The question will remain on whether or not Haftar can be trusted to be a part of any future solution. His previous record shows that he will not abide by any agreement and he will try to take over the country by any means necessary. His latest attack on Tripoli, a few days before the UN conference, which was going to give him a major say in the future of the country, proves that he is not interested in being a power sharing solution and prefers to have complete control.

If the international community continues to stay on the sidelines, watching and allowing Haftar’s international allies to continue providing him with support, this war will continue with no foreseeable end and at a heavy price. The longer it continues, the more likely it is that other regional powers will provide support to the other side. The foreign Minister of Algeria announced last week that they would not stand by and watch Tripoli being attacked. President Erdogan of Turkey announced that his country would support the legitimate government of Libya against this attack. In essence, this conflict has the potential to become a proxy war between the conflicting countries in the region, eventually spreading outside of Libya and leading to the destabilization of the entire region.

Mustafa A.G. Abushagur is the Chairman of the Libyan Policy Institute, Former Deputy Prime Minister of Libya (2011-12) and Member of the Libyan House of Representatives (2014-17).

Image: Photo: Members of Libyan National Army (LNA) commanded by Khalifa Haftar, get ready before heading out of Benghazi to reinforce the troops advancing to Tripoli, in Benghazi, Libya April 13, 2019. REUTERS/Esam Omran Al-Fetori