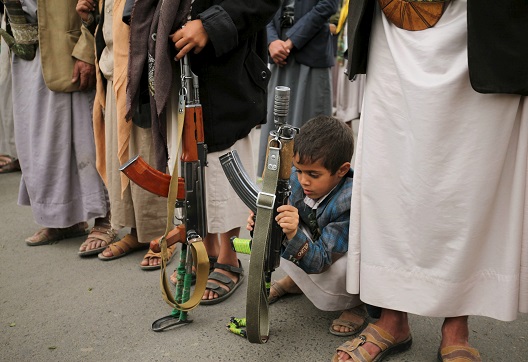 A boy holds his father's rifle during a rally by followers of the Houthi movement against the Saudi-led coalition in Yemen's capital Sanaa, August 11, 2015. (Reuters)

US-ally Saudi Arabia is leading a war against Houthi rebels in Yemen. But after nearly five months, the Houthis have entrenched themselves in captured territory, al-Qaeda and the Islamic State (ISIS or ISIL) have gained ground, and the war has created a humanitarian catastrophe, with over 4,000 dead and aid agencies warning of impending famine.

The United States has quietly supported a political solution while providing a preponderance of military hardware, intelligence, and logistical support to the war effort. Admittedly, the Obama administration faces tough choices. Relations with Saudi Arabia have suffered over the Iranian nuclear deal and, with the Yemeni conflict encroaching on the Kingdom’s border, sensitive policy differences on how to handle it threaten to strain the relationship further. But the current paradox in the US approach will only guarantee more of the same: dragging Yemen further into the vortex of a civil war that would destroy the country and threaten the security of the Arabian Peninsula. If the United States does not act now, the associated costs to ending the violence and mitigating the fallout will continue to climb.

The Houthis instigated conflict by capturing the capital Sana’a in September 2014, then marching south and east, seeking to subdue the whole country. The ease with which they took Sana’a and their success in driving the government of President Abdrabbo Mansour Hadi out of Yemen gave them the false impression that no credible force would get in their way. Within Yemen, a wide variety of political, tribal, and military actors resisted this power grab. The Houthis underestimated the necessity of power sharing in Yemen’s fractious political environment and severely overestimated their appeal in the south. In these predominately Shaf`i (Sunni) areas of the country, residents strongly reject the dominance of any group from the Zaydi (Shia) northern highlands, such as the Houthis.

Saudi Arabia could not tolerate the rapid Houthi advance. The Kingdom, along with nine other mostly Arab states, set in motion an air war to show the Houthis the limits of their power and—more importantly—to send a message to Iran (which the Kingdom views as a close Houthi ally) that it would not be allowed to spread its influence further. Having done so in devastating fashion, the Saudi-led coalition slowed Houthi advances, but until recently had failed to roll back their gains. This changed in July when the tide turned against the Houthis in the south as Yemeni fighters backed by coalition troops and air power captured the port city of Aden. Since then the coalition has expanded gains in the south and east, where local opposition to the Houthis is strongest.

But even if coalition forces continue to build on recent gains, the rebel strength lies in the northern highlands, where they have begun to dig in for a long fight. Historically military incursions into this area have been bloody and costly affairs, more likely to create a war economy than a clear victory. Now is no different.

Rather than pushing for total victory, Saudi Arabia may have a different, more achievable mission in mind: carving out a satellite Sunni-dominated area that excludes the northern Zaydi highlands. With southerners now hopeful that the current fight will liberate the south and some anti-Houthi tribes in the north already enjoying their largesse, Saudi Arabia could plausibly secure the control of strategically important areas, while keeping the Houthis encircled in the far north—even if that terrain initially included the capital Sana’a. In theory, such a territory could be viable economically, especially if it included Ma’rib’s oil and gas fields. With the Houthis contained in the highlands, they could theoretically be left to live in their autonomous region or eventually squeezed further and have Sana’a taken away from them.

As appealing as that scenario might be for the Saudis, it would likely open a Pandora’s box of instability. For one, carving out a sub-state would require overwhelming ground forces to establish artificial borders that would likely face continuous challenge. The regions that might be included are also neither tribally nor politically homogeneous. The southern separatist Hirak Movement seeks independence for the territories of the former communist south. They would likely resist any attempt to bind them to other territories. Fragmented factions within Hirak would also likely turn against one another once the Houthi danger no longer unites them. Ultimately, Saudi Arabia would still have a Houthi insurgency now concentrated on its southern border.

Both options for Saudi Arabia would mean continued involvement in a Yemen quagmire. Without a strong central authority to impose law and order, al-Qaeda and ISIS would have the room to continue sinking roots in communities under their control, particularly in the south, and grow into a greater threat to both international and Yemeni interests. In fact, the chaos and growing frustration of Yemeni youth would prove a strong recruitment incentive for the two radical organizations whose growth rate already outstrips the attrition caused by drone attacks.

Meanwhile, human suffering would continue to rise. Already it has reached catastrophic proportions. The United Nations has labeled Yemen a category 3 crisis—on par with Syria, Iraq, and South Sudan. Oxfam, Doctors Without Borders, and Human Rights Watch have all documented violations of the laws of war by both sides that inflict heavy civilian casualties.

The United States has both the national security interest and the moral imperative to intervene diplomatically, but aggressively, to stop the fighting. Locally, political and tribal factions need to be reconciled. The UN Special Envoy Ismail Ould Cheikh Ahmed, with strong backing from the United States and ideally the P-5, could mediate a political solution between Yemen’s warring factions, which has been stymied not only by Houthi intransigence, but also by US, UK, and French support for the Saudi-led war effort. Coalition gains have seemingly opened an opportunity for a genuine compromise as the Houthis for the first time have offered concessions through a UN-brokered mediation effort in Muscat on August 9. The United States should capitalize on this opportunity, pressing the Yemeni government in Riyadh and their Saudi backers to support a political solution that addresses their legitimate security concerns and mitigates the Houthi threat.

Yemen has paid a high price for the regional cold war between Saudi Arabia and Iran. Most recently, the nuclear talks pushed Saudi Arabia towards a more muscular military response on its southern border and discouraged US objections to it in any meaningful way for fear of further antagonizing the Kingdom. While the nuclear deal is vital in its own right, in the long run it will be judged both on its ability to prevent Tehran from acquiring nuclear weapons and on its political impact across the region. Now the agreement with Tehran will have to be put to the test: can a new conflict resolution era in the Middle East be launched on this foundation? Or did the P5+1 effort merely succeed in limiting Iran’s nuclear capabilities at the expense of the region’s problems?

April Longley Alley is the Senior Arabian Peninsula Analyst for the International Crisis Group. A former Fulbright fellow, she has conducted fieldwork in Yemen since 2004 and currently resides in Dubai.