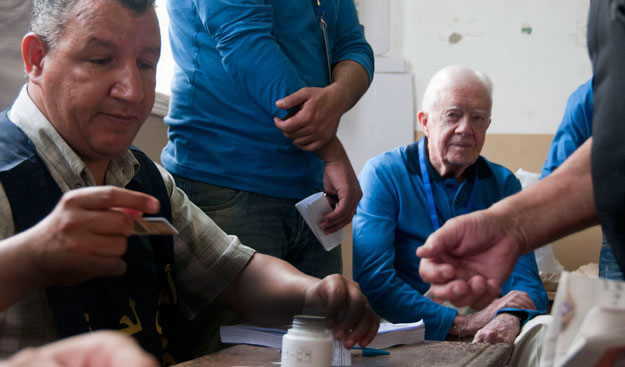 The Carter Center has released a preliminary statement on the first round of Egypt’s presidential election. The statement acknowledges that restrictions on international monitors have limited the scope of the Carter Center’s mission, making it impossible to draw conclusions about the process as a whole. In addition to delayed accreditation by the Egyptian government, which prevented the Carter Center from assessing pre-election activities and campaigning, monitors were only allowed inside polling stations for a 30-minute window of time.

Although the Center’s limited assessing of the polling process has been "generally positive thus far," the Center cited broader concerns with aspects of the legal framework and electoral system including Article 28 of the interim constitution, which defines decisions by the Supreme Presidential Election Commission (SPEC) as final and not subject to appeal by any party.

Click here for the full report or see the executive summary below:

The Carter Center election witnessing mission was accredited in Egypt by the Presidential Election Commission (PEC) on May 3, 2012. Accreditation badges, necessary for witnesses to observe the process, were only provided on May 16, less than seven days before the election.  The Carter Center mission, which is led by former U.S. President Jimmy Carter, includes a total of 102 witnesses from 35 countries who visited 909 polling stations in 25 governorates to follow voting, counting, and tabulation. The Center’s witnesses continue to assess the conclusion of the vote tabulation, and will remain in Egypt to follow the runoff election and the post-election environment.  This statement is preliminary; a final report will be published four months after the end of the electoral process. The Carter Center mission to Egypt is limited in scope due to the late stage of accreditation, the limitation that witnessing missions could not issue statements prior to polling, and a 30-minute time limit restriction on witnesses’ presence inside polling stations.

Egypt’s first presidential election in the post-Mubarak era marks the first time in Egypt’s history that the head of state will be directly elected by the people in a competitive election.

Due to restrictions imposed on election witnesses by Egypt’s electoral authorities that prevented assessment of critical pre-election phases including voter registration and campaigning, The Carter Center was only able to conduct a limited mission focusing on voting, counting, and vote tabulation. As a result, the Center is unable to reach a conclusion about the process as a whole. The Center’s limited mission found that the polling process was peaceful and orderly and marked by a sense of hope in Egypt’s struggle for democracy. The Center noted an important new measure to promote transparency – counting at the polling station in the presence of candidate agents and witnesses. At the same time, the Center also found that election authorities prohibited access to the final aggregation of national results, undermining the overall transparency of the process. Final results have not been announced yet and the electoral process is ongoing.

The broader context in which these elections were held is a cause for concern. To date, several fundamental questions remain unanswered and continue to cast uncertainty over the continued transition process, including the degree to which the powers of the new president will be balanced by other institutions.  While the Center’s assessment of the voting and counting process is generally positive thus far, it falls within this larger context of concerns about key aspects of the legal and electoral framework.  In summary, the Center finds that: