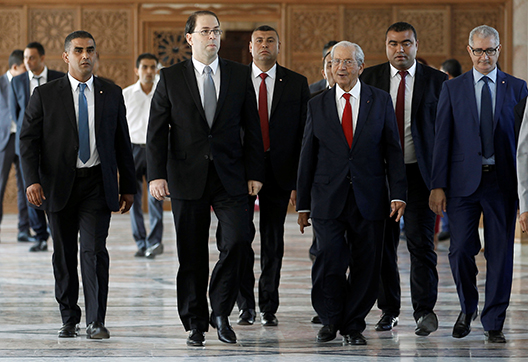 In a context of economic woes, Youssef Chahed’s proposed cabinet received overwhelming support in a vote of confidence on August 26, with 167 of Tunisia’s members of parliament voting in its favor. The early vote, which took place prior to the September 1 legal deadline to form a new government, allowed the newly appointed 26 ministers and 14 Secretaries of State to begin their functions as of August 30. Chahed’s cabinet, the seventh government to take office since the 2011 revolution, claims that it will be setting itself apart from its predecessors, most notably from toppled head of government Habib Essid. Essid, who was gradually sidelined from the political game, was eventually ousted in a vote of no confidence in July, partly because of Tunisia’s poor economic performance during his 18 months in office.

Chahed’s National Unity Government, self-proclaimed as the most inclusive Tunisian government in office to date, maintains that its multi-partisan formation is better equipped than former traditional governments to face political tensions and inter-party rivalries. Indeed, with the diverse political backgrounds of the ministers and secretaries of state, eight female members, and an average age below 48, Chahed’s carefully selected cabinet sets itself apart. Chahed, and his government, however, have not been without criticism. The young technocrat, who held multiple government positions in the past, was openly accused by his detractors—among them Popular Front deputy Ammar Amaroussia and President of the General Union Of Tunisian Students Ghassen Bouazzi–of being President Beji Caid Essebsi’s protégé, and therefore too close to the old guards’ nepotistic tendencies.

Bouazzi was arrested after Chahed’s nomination for spray-painting the hashtag #WeldekFiDarek by a statue of the country’s first president Habib Bourguiba in Tunis. He was released after a judge dismissed charges of insulting the president. #WeldekFiDarek (which roughly translates to “send your son home,”) is a popular hashtag used on social media by those who accuse Beji Caid Essebsi of exercising nepotism with regard to his son Hafed and Youssef Chahed. The fact that Chahed picked his cabinet with little to no prior consultation also prompted a number of deputies from Nidaa Tounes and other major parties to threaten to resign. Ultimately, only 22 deputies voted against Chahed’s cabinet and five abstained, avoiding another potential political crisis.

In a speech given at the Assembly of the Representatives of the People immediately prior to the vote, Chahed outlined five main goals for his unity government, and set a three-year projection plan for the country’s economic growth and security. In an effort to demonstrate “transparency and accountability to the Tunisian people,” an expression that Chahed repeated during his speech, the new head of government announced tougher economic and security measures to address the current crises, while reassuring the public that these exceptional measures were essential to reach stability and that they would not contravene the democratic spirit of the 2011 Revolution.

Minister of Defense Farhat Horchani, Minister of the Interior Hedi Mejdoub, and Minister of Foreign Affairs Khemaies Jhinaoui remained in office. The decision to maintain these ministers (along with six others) in the lineup could stem from progress made in Essid’s counterterrorism strategy, who was himself Minister of the Interior prior to being appointed as head of government. In April 2016, Essid allocated 550 million Tunisian Dinars (TD) to strengthen the security apparatuses and to modernize and upgrade military equipment, and 90 million TD to reinforce border security. Serious challenges remain, however, as demonstrated by the Al Qaeda-linked terror attack that resulted in the killing of three soldiers in Mount Samama, an impoverished area inside the terror-prone Kasserine governorate days after the approval of the new cabinet. The government’s response to this attack—which so far has included the killing of two militants preparing a suicide attack according to Tunisian authorities—will determine its ability to effectively respond and contain terror cells operating within the country. Tunisia, a country of 11.5 million inhabitants, is also still the largest exporter of foreign fighters joining ISIS in Libya and the Levant.

In addition to addressing serious security concerns, the other main prerogative of Chahed’s government will be to redress Tunisia’s sinking economy, aided by his appointed ministers of finance and economy, respectively Lamia Zribi, an independent who made a career in the banking sector, and Slim Chaker, who worked as a consultant for the World Bank along with other finance and development related functions, and previously Minister of Trade and Handicrafts. During his August 26 speech, Chahed stressed the country’s alarming economic situation and argued that participative austerity measures could be implemented in 2017.

Tunisia remains heavily dependent on tourism, economic partnerships with the European Union, and loan guarantees from the International Monetary Fund (IMF) and other International Financial Institutions (IFIs).  If implemented, Chahed says his proposed austerity measures would primarily increase the fiscal revenues and cut public sector spending, starting with welfare and government-sponsored healthcare, thus affecting mid and lower-income citizens. According to Chahed, the accumulated deficit of the social funds and of the National Health Insurance Fund exceeds 3 million TD, thus increasing the likelihood of welfare and public sector job cuts. Even as the new head of government and his cabinet take the reins, the nation’s state-owned airline, Tunisair, just laid off 1,000 of its 8,000 employees due to budget constraints and cutbacks in a decision that was made by Essid’s cabinet. Financial risk management expert Mourad Hattab and former Minister of the Economy and Finance Hakim Ben Hammouda, however, both predict very difficult times for Tunisia’s economy and recommend urgent short-term policies in lieu of austerity measures, starting with a better control of the black market, tax incentives for the industrial sector and the finalizing of Investment Code amendments.

In light of the decline in productivity and FDI, Tunisia’s debt ratio is currently estimated at over 61 percent of the GDP. The IMF approved a $2.9 billion loan last June to strengthen job creation, and Tunisia signed a third $500 million loan guarantee with the United States. The latter was described in a State Department statement as indicative of US commitment to helping Tunisia “build an economic foundation that supports sustainable and inclusive economic and job growth.” International commitment to Tunisia comes at a time when the economy is witnessing a low annual growth of less than 2 percent. Coupled with the lowest phosphates production rates since 1928—a key sector to Tunisia’s economy, now paralyzed by continuous strikes and that witnessed a 60 percent production drop this last year—and a devalued Tunisian Dinar, Chahed’s government is tasked with carrying out an extremely delicate balancing act: overcoming severe economic challenges, convincing a weary and frustrated population of the potential need for austerity measures, all while respecting civil liberties in the face of potential unrest.

Tunisia faces a tense security climate and a fragile political order—posing a challenge to its growth—despite the many indicators of success that the country has to offer. It remains to be seen whether Chahed’s proposals and his inclusive cabinet will be able to shift the paradigm and lift the country out of its ongoing challenges.

Fatim-Zohra El Malki is a research associate at the Rafik Hariri Center for the Middle East. She holds a Master’s degree in Arab Studies from Georgetown University and a degree in International Law and economics. Her interests include political transformations in the Middle East and North Africa.