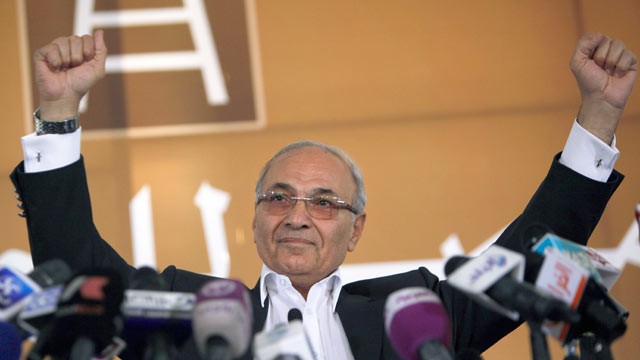 Egypt’s run-off election between Mubarak former Prime Minister Ahmed Shafik and the Brotherhood’s candidate Mohamed Morsi will take place after three weeks of political turmoil which have induced critical changes since the first round of voting. The altered political environment heading into the second round could give rise to scenarios very different from those that seemed possible at the outset of the race. The most significant of these developments are the transformation of Tahrir Square from an effective political tool of the revolutionaries into a platform used solely for the expression of anger; a surge in the popularity of Ahmed Shafik; and the return of old regime tactics of intimidation against the Muslim Brotherhood — all of which play into the hands of Shafik.

The first game-changing event between the first and second rounds of the election was the controversial sentencing of former President Hosni Mubarak and former Interior Minister Habib al-Adly to 25 years in prison, along with the acquittal of the all six deputies on charges of killing protesters. The lenient verdicts provoked an immediate backlash, as thousands of protesters returned to Tahrir Square, the iconic staging ground of last year’s revolution, to demand the rights of the martyrs and the implementation of a disenfranchisement law passed by Parliament to bar former regime officials – including presidential candidate Ahmed Shafik – from running for office. But the demonstrations fizzled out without any concessions or sign of the second revolution that activists have warned of. If Shafik wins, protests will likely continue at a low level but with no concrete effect on the political process.
The Muslim Brotherhood passed up an opportunity to leverage the anger of protesters to rally Egypt’s fragmented political forces around their common interest in opposing Ahmed Shafik and the resurrection of the former regime. Instead, the Brotherhood has been busy refuting allegations that its own members used violence against protesters during the notorious Battle of the Camel last year.
It has become clear to me over the past few days in Tahrir Square that protesters are incredibly angry yet unable to take any constructive actions. The inefficacy of mass demonstrations can be attributed to two factors. First, the elite – including first-round presidential candidates Abdel Moneim Aboul Fotouh and Hamdeen Sabbahi — failed to mobilize the masses around a unified set of demands. This factor has implications for the election, since the perceived weakness of the elite will limit the influence of their endorsements for either Ahmed Shafik or Mohamed Morsi, and voters will not take orders from leaders who have disappointed them. Second, the political leverage of Tahrir Square has been neutralized, because protesters seem to have lost the ability to translate their anger into concrete actions that could exert pressure on decision-makers.
The ruling authorities can take comfort in the fact that whatever anger is provoked by the presidential election results – especially if Shafik wins – will not amount to more than shouts and slogans against the SCAF and former regime. The elite will not have the ability to organize or inspire mass demonstrations because of the mistrust the protesters feel for them. Young people in Tahrir Square told me they were disappointed in the lack of leadership shown by the elite, to whom they looked for a signal or strategy for advancing their political goals – but which never came.
Why did the elite fail to act on signs of an impending power grab by the SCAF that were on display for days before the pivotal Constitutional Court rulings on June 14?  It was clear to me that when the Ministry of Justice gave state security and military police sweeping powers to detain civilians in anticipation of unrest before the court rulings and the election, the SCAF was preparing to impose order over the country by force if need be, in the event of mass protests following a possible victory by Shafik.
Meanwhile, political and revolutionary forces failed to coalesce around Mohamed Morsi and support him against Shafik, as a representative of the former regime. The Brotherhood resisted demands by non-Islamists for guarantees of protecting a civil state, which only fueled their mutual distrust. Although a few parties – mostly Islamist — including Wasat, Nour, and al-Gama’a al-Islamiya’s Construction and Development Party as well as the moderate Islamist presidential candidate Abdel Moneim Aboul Fotouh endorsed Mohamed Morsi, the coalition lacked diversity and depth.
At the same time, Shafik’s popularity has surged along with the audacity and confidence of his supporters. Shafik made an unexpectedly strong showing in the first round and his campaign has been building strength ever since. Shafik’s supporters have taken to the streets boldly, showing campaign tactics straight out of the NDP playbook. The turning point for Shafik came when he successfully rebranded himself as the “civil state” candidate, appealing to voters by warning that the Brotherhood could transform Egypt into a religious state following in the footsteps of Afghanistan, Sudan or Iran.
In the few weeks between the first and second rouns, Shafik successfully deployed the “scarecrow” tactic to stir up fears of an Islamist takeover by the Brotherood. Shafik also attacked the Brotherhood’s revolutionary credentials, accusing the group of conspiring against protesters in the deadly Battle of the Camel.
In my interactions with voters, it is clear that a significant number have been persuaded by Shafik’s intimidation tactics. They cited fear of Islamic rule as one of their motivations for backing Shafik.
The constitutional court rulings on June 14 are the fourth factor shaking up the political game in the final days leading up to the run-off. Shafik, whose argument against the disenfranchisement law has now been vindicated, will enter the second round even more confident. Meanwhile, the Brotherhood has been dealt a severe blow by the court ruling to dissolve Parliament, and stands to lose its control of the legislature.
In the end, the net effect of the changes that have taken place since the first round is a boost to Shafik, who has escaped the threat of disqualification while gaining the loyalty of a large constituency of voters and endorsements from prominent public figures committed to a civil state. Meanwhile, Morsi has failed to unify revolutionary forces around his candidacy and faces the new challenge of refuting a smear campaign against the Brotherhood, both of which have increased his political vulnerability heading into the decisive run-off.
Haitham Tabei is a journalist at Asharq Al-Awsat. He has previously worked as a special correspondent for the Washington Post in Cairo and as political researcher with the Egyptian Council for Foreign Affairs.