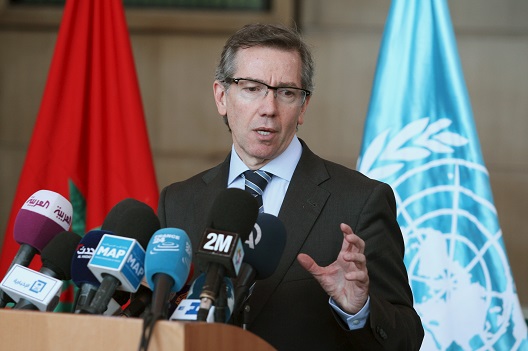 The United Nations Support Mission to Libya (UNSMIL) issued its first draft agreement on the political transition in Libya that was given to the parties to the political dialogue, taking place in different cities inside and outside of Libya since September 2014. The last round of political talks took place in the Moroccan city of Skhirat last week, where the rival political forces discussed, among other ideas, the formation of a National Unity Government—a cornerstone of the draft agreement.

While the draft agreement represents the culmination of months of peacemaking efforts to bring Libya back from the brink, the details of some provisions in the current draft raise concerns. The Prime Minister’s mandate in particular, as mentioned in Article 7 of the draft agreement, grants the power to issue laws previously adopted by the Libyan house of representative (HoR). The vague wording of this text could give the Prime Minister far more power than originally intended, potentially derailing the return to a political process.

Article 7 of the draft agreement states:

“The Council of Ministers [cabinet] undertakes the following duties:
3- Issuance of the laws approved by the House of Representatives”

This clause originally came from the proposal of February Committee—the group originally tasked with providing a political roadmap for Libya in 2014 (Article 34, Section 8). However, on its own, the provision grants the power granted to the office with none of the intended checks. In the February Committee’s proposal, the article was tied to another clause (Article 19) which states:

“The President of the State has seven days to remand the law back to the parliament in a written memo with his reasoning requesting its reconsideration. The parliament then has one week to discuss the law again. If the parliament approves it again, it is adopted as law without going through the President.”

One cannot underestimate the danger should the Prime Minister retain the right to issue laws without checking this power. If the drafters of this statement intended to derive this article from the proposals of the February 17 Commission, then it should be adopted in its entirety and complete context (Article 34, Section 8 and Article 19 combined). Since the primary duty of the parliament is legislative, giving the Prime Minister the authority to issue laws empowers the office to impede and interfere with parliament’s primary responsibility.

One can find many other examples in similar legal and constitutional provisions from neighboring countries that illustrate this basic tenant in governance. For instance, the founding law dealing with the temporary organization of the Tunisian public authorities (Article 11) states:

“The President of the Republic is responsible for the following tasks:

“The President of the Republic has the right to issue the laws or object to them.  If he objects to a bill approved by the House of Representatives, he must remand the bill back to the House within 30 days from its receipt from the House.  If he does not remand it back to the parliament within this period, it shall be considered as law and issued.  But if he returns it to the House within the 30 days, and it is approved again by a 2/3 majority of the House of Representatives, then it is considered as law and issued.”

Libya’s draft agreement does not include a deadline for the Prime Minister to issue laws drafted and approved by the House of Representatives, nor does it implement a mechanism to guarantee their issuance. To achieve the balance of power between the legislative and executive branches of the government and to prevent one branch from usurping the authority of the other, the issuance of laws should not depend on the will and whims of a single entity—in this case the Prime Minister. The danger of this clause is that it gives veto power to the Prime Minister over the House of Representatives to the extent that he can block its work and render it obsolete.

In its current form, this clause (Article 7, Point 3 of the proposed draft) can effectively strip the House of Representatives of its primary authority and power. To correct this flaw and prevent this outcome, Article 34 Section 8 and Article 19 from the proposals of the February 17 Commission together as previously intended. While acknowledging the importance of this draft accord and the excellent effort put into it by all the parties involved, Libya and its partners must remain cautious against any potential obstacles to its future implementation.