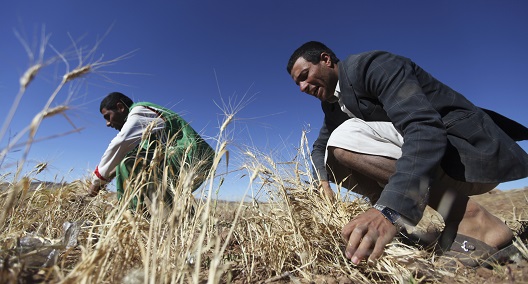 Small farmers play a major role in the Middle East and North Africa (MENA) region’s food security. They produce the bulk of the region’s domestic supply of staples. However, small farm holders are among the most vulnerable to the impacts of climate change in the region. Improving their resilience to climate-induced agriculture sector challenges is important not only to support their livelihoods, but also to protect food security throughout the MENA region.

Rain-fed agriculture systems are among the most vulnerable farming systems in a semi-arid climate that is prevalent in the MENA region outside its desert area. In semi-arid climate zones, rainfall ranges from a minimum of 200 mm in winter to a maximum of 800 mm in summer, with an annual average of 400-600 mm. While this rainfall may allow for crop cultivation, without irrigation it is insufficient to sustain stable, high yields. By way of comparison, sub-humid climate zones generally receive between 600 mm and 1200 mm of rainfall on average annually.

Furthermore, in most of the southern and eastern Mediterranean countries, rainfall quantities received are at the lower end of the range for semi-arid zones. Mean annual rainfall ranges from 50 mm in Egypt to 346 mm in Morocco, and 111 in Jordan to 661 mm in Lebanon. This meager rainfall is also unreliable, which makes crop cultivation untenable in some parts of these semi-arid areas.

The rain-fed farming systems of MENA are therefore vulnerable to the adverse impacts of climate change. Based on current projections, as global warming continues it is expected that the MENA region will become drier with reduced and more unpredictable annual rainfall, and that more extreme weather events will become more frequent. More of the region’s agricultural land areas would no longer be suitable for crop cultivation.

However, with the right policy measures in place, small farmers who cultivate more productive rain-fed land areas could be able to sustain their agricultural livelihoods. Supporting currently viable small farm communities—to prevent both the deterioration of good productive land as well as the destabilization of livelihoods that depend on them—is crucial not just from an individual farmer’s perspective, but also from a national perspective. Protecting productive small farmers from climate change pressures could help buffer their communities from economic distress and a consequent potential rise in social tensions and transgressions upon land rights. It could also curb rural migration to urban areas. These support policies are also essential to maintain a reasonable balance between the share of domestic production and imports in MENA’s total food supply, given small farmers’ large contribution to the former and to the region’s food security. Overall, this would help maintain sociopolitical and national economic stability.

Attention to the needs and challenges facing small farmer communities is also essential from an equity perspective. Disparities in farmland ownership in the region’s countries are already huge. When small independent farmers cannot sustain their agricultural livelihoods, they are often compelled to sell their lands. This could enable further large-scale land ownership consolidation to occur, which would widen existing rural wealth and income inequalities. Additionally, those small farmers may find no alternative livelihood means but low-paying or seasonal work. When even these insecure livelihood options are unavailable, rural unemployment will grow. Furthermore, these farming communities’ contributions to MENA’s total food supply would also be lost while food consumption needs continue to grow, which would increase the fragility of the region’s food security.

It is important to support these communities for environmental sustainability as well, in order to preserve the natural resource foundation on which food security rests in MENA countries. The scarcity and fragility of the region’s freshwater and agricultural land resources call for more, not less, democratization in the processes of managing and using these vital natural assets. For this to be possible, MENA’s agricultural production processes and markets should remain competitive. But the objectives of competitiveness and democratization would be ill-served when inequality in control over agricultural production’s natural resources increases further.

Incentive-based policy measures are necessary to support more sustainable methods of farming. Such policies could include measures that more robustly encourage freshwater conservation based on location and other agriculture production parameters. At the same time, the necessary support should be given to farmers to transition to cropping patterns and crop varieties that are better suited to the changing climate. Heat- and drought-resistant, and salt-tolerant, crops and cultivars need to become widely available and accessible to farming communities. While the risks to agricultural production are growing due to the climate’s increasing unreliability, these types of measures could protect small farmers’ total agricultural output and contribution to MENA’s food security from falling precipitously.

Policies designed to strengthen the agricultural resource foundation and the productivity of small farmers vulnerable to climate change impacts in MENA could yield multiple and broad benefits, locally and beyond. On an individual level, farmer livelihood security would be improved, and rural communities would remain diverse and resilient. A vibrant small farmer community in the region would enhance the resilience and competitiveness of agricultural production, and local and national food markets. These conditions are important for market stability and food security. They are therefore essential for maintaining socioeconomic and political stability at a national and a regional scale.

Amal A. Kandeel is the Director of the Climate Change, Environment and Human Security Program at the Middle East Institute.

Image: Men reap grain during the harvest season in their farm on the outskirts of Sanaa, October 28, 2013. Yemen is the poorest country in the Middle East in grain production as a result of the expansion in the cultivation of the qat plant, a mild stimulant, according to the local media. REUTERS/Mohamed al-Sayaghi (YEMEN - Tags: AGRICULTURE SOCIETY BUSINESS)