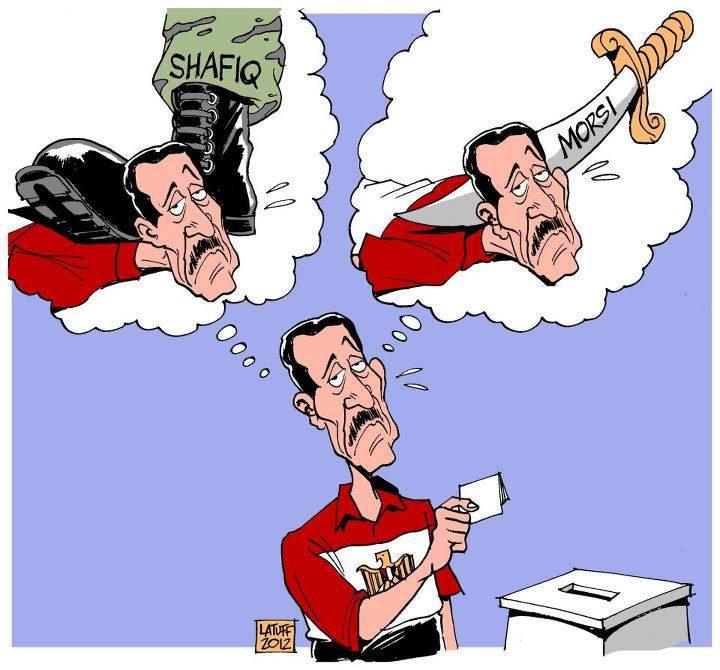 The first round of the presidential election has set the stage for a decisive run-off between the Freedom and Justice Party’s candidate Mohamed Morsi and former Prime Minsiter Ahmed Shafik – a race viewed as a worst case scenario for millions of supporters of the revolution and bewildered voters who cannot envision voting for two candidates who do not express the hopes of the revolution, but instead represent the potential for ultraconservative Islam and a restoration of the Mubarak regime. Reluctant and undecided voters are torn between the Brotherhood’s candidate – whom they view as power-hungry – and the candidate of the former regime – suspected of involvement in the killing of protesters in the notorious Battle of the Camel last year.

Activists are demanding a boycott of the elections, while other non-Islamists who did not vote for Morsi in the first round are now inclined to do so to prevent Shafik from coming to power.  Many supporters of the revolution have decided to back Shafik out of fear of the alternative: hegemonic rule by the Brotherhood. Some political groups and figures here in Cairo claim that Shafik as president would be easier to oppose and contain than Morsi, who could try to depict his detractors as opponents of the will of God.

With assurances from the SCAF that the run-off round will be completed under any circumstances, and that the military will not Hand over power except to an elected president, dreams of forming a civilian presidential council have faded. Egyptians are now faced with the dilemma of choosing between Shafik and Morsi.

Some 23 million out of 51 million registered voters cast ballots in the first round of the election, with a turnout rate of approximately 45 percent. Now the decisive factor will be the extent to which each candidate can make voters fear his rival, which is apparent in all the statements and pressers of Morsi and Shafik

Of the 23 million Egyptians who voted in the first round of the election, few hoped it would lead to the current scenario in which voters are forced to choose between the threat of rule by the Muslim Brotherhood following in the footsteps of Iran and the equally frightful possibility of a reproduction of the Mubarak regime in the hands of Shafik, and all of the corruption, poverty, and repression that came with it.

The Brotherhood’s popularity is on the decline as a result of a series of broken promises, including reneging on commitments to refrain from fielding a presidential candidate and running for a majority of seats in Parliament. Growing awareness of the Brotherhood’s quest to monopolize state institutions, its controversial celebration of the anniversary of the revolution while others were mourning, the disappointing performance of the Freedom and Justice Party in Parliament and shameful passivity in the face of lethal violence against protesters outside of the Interior Ministry and in Abbassiya earlier this year have contributed to a loss of confidence in the Brotherhood. Numerous revolutionary voters with whom I have spoken in recent days said they would not vote for Morsi because of the Brotherhood’s dishonesty.

On the other hand, Shafik is an equally problematic candidate widely viewed as an agent of the former regime, owing to his legacy as Mubarak’s prime minister in the final days of the regime, during which he allegedly promised to protect protesters before the unleashing of thugs against them in the infamous Battle of the Camels. Many fear that Shafik’s victory would reproduce the former regime, an outcome that is very plausible considering that Shafik has surrounded himself with advisors drawn from the ranks of the armed forces, retired police, and former NDP officials. However, many Egyptians committed to preserving a civil state – especially Christians – view Shafik as the only alternative to rule.

Hundreds of thousands of Egyptians in Cairo and other provinces have vowed to boycotte the runoff round to opt out of what they believe to be a lose-lose decision. Activists accuse Shafik of killing revolutionaries and engaging in corruption against the backdrop of ongoing investigations by the Attorney General, but they are equally opposed to the Brotherhood’s candidate, whom they accuse of seeking to monopolize power. Proponents of the boycott argue that the Brotherhood does not represent the revolution – despite its claims – and only supported the uprising to serve its own narrow political objectives, rather than the interests of the nation.

Detractors of the Brotherhood also fear that Egyptian could follow in the footsteps of the Iranian revolution, in which millions of youth helped stage a revolt only to surrender the state to Islamic rule. Some of the protesters demanding a boycott are displaying images of executed Iranian dissidents in an effort to scare voters away from Morsi. In my conversations with voters as the election draws closer, it is clear that the idea of a boycott is gaining steam as Egyptians envision equally frightening outcomes under the rule of either Morsi or Shafik.

Many voters will simply choose Morsi as a last resort to save the revolution from a reproduction of the Mubarak regime. The Brotherhood has tried to capitalize on this desperate sentiment by persuading voters that the run-off is their last chance to fully dismantle the former regime. Many voters in this camp, including some Coptic Christians, say they will defy their personal beliefs and commitment to a civil state to vote for Morsi as the lesser of two evils. The fears elicited by each of the candidates are a driving factor in determining the decisions of voters. Morsi and Shafik themselves appear to be fully aware of the power of fear, focusing on attacking one another’s vulnerabilities rather than promoting their own credentials. Smear campaigns playing up the threat of a theocratic state could tilt the playing field decisively in Shafik’s favor, unless the Brotherhood can convince liberal and revolutionary forces to unite around its candidate.

Haitham Tabei is a journalist at Asharq Al-Awsat. He has previously worked as a special correspondent for the Washington Post in Cairo and as political researcher with the Egyptian Council for Foreign Affairs.