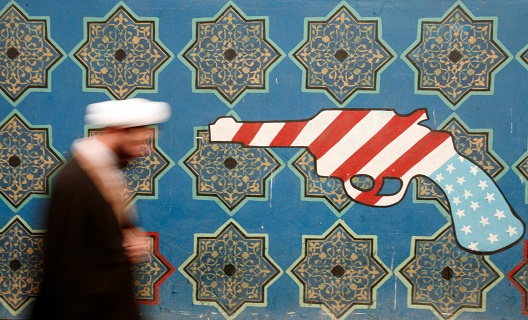 Top officials of the administration of Donald J. Trump love to talk tough on Iran. Last year Trump warned in an all-capitals tweet that Iran “would suffer consequences the likes of which few throughout history have ever suffered before” if it threatened the US.

US National Security Adviser John Bolton boasted in November that Washington would use sanctions to “squeeze” Iran “until the pips squeak.” And on February 13-14 US Secretary of State Mike Pompeo is organizing a high-profile Middle East conference in Warsaw, seen as an anti-Iran platform, and said earlier this year that the US “will not stand by and watch the Iranian regime’s destructive policies place international stability and security at risk.”

But the tough rhetoric and the constant chatter is largely empty, and Iranians know it. Rarely, if ever, has the gap been wider between US rhetoric on Iran and its risk tolerance; than under the Trump administration.

In fact, the constant hectoring of Iran, likely aimed at a narrow domestic audience, could be dangerous and lead to an unplanned escalation, or undermine the administration’s own questionable goals, much like the George W. Bush administration.

By the time the United States invaded Iraq sixteen years ago under Bush, Tehran was already shaken by September 11, 2001 and its aftermath. Iran cooperated with the US to topple the Taliban, only to be labeled months later a member of the “axis of evil” by George W. Bush.

That single phrase may have destroyed the political credibility of the reformist President Mohammad Khatami, who was then seen as Iran’s best hope for domestic change, and guaranteed the rise of foreign policy hardliners in subsequent years.

Despite being painted as a pariah, Iran did not interfere in the toppling of Saddam Hussein, and kept a rather neutral stance.

In the immediate aftermath of the 2003 invasion, perhaps intimidated by the presence of some 173,000 US and other troops in the Gulf, in addition to the thousands already in Afghanistan, Iran agreed to suspend its uranium enrichment program, and reached out to Washington via the Swiss embassy in Tehran with an offer to begin immediate talks on resolving regional issues, including the Israeli-Palestinian conflict.

The United States ignored Tehran’s entreaties, instead ramping up the noise against Iran as neoconservatives loudly signaled that after Iraq and Afghanistan, Syria, Iran, and Lebanese Hezbollah would be next on their list. It was largely empty rhetoric, but it would have consequences.

Given US missteps, an anti-American insurgency in Iraq was likely inevitable. But Iran and its ally Syria turned up the temperature, opening the gates for jihadis and Shia militiamen of various stripes to enter Iraq. They helped turn Iraq into a laboratory for equipping, training, and cultivating various armed non-state actors, as well as a place to refine armor-piercing roadside bomb technology to target US military vehicles.

Washington faced the prospect of a Vietnam-like defeat in Iraq, before it managed to recalibrate its military strategy, tacitly come to terms with Iran, and collaborate with Iranian-friendly partners in Baghdad to bring some measure of stability to the country.

What if instead of threatening Iran once it had invaded Iraq, the Bush administration and its surrogates had kept quiet, perhaps invited Tehran to help secure the country, even if they eventually planned to turn against Tehran?

Once again, the United States is ramping up its anti-Iran rhetoric. The current US Iran strategy under Trump is confusing, and driven by competing agendas at the White House. But Trump’s anti-Muslim rhetoric and labeling of Iran as a “terrorist” nation has likely played into the hands of the regime.

Iranian authorities used to struggle to censor former US President Barack Obama’s peaceful entreaties in the media. Now they broadcast live press conferences by Trump and his surrogates. “The level of anti-Americanism introduced into Iran and among Iranians under Trump is remarkable,” says Adnan Tabatabai, an Iran political analyst. “It’s because this guy doesn’t shut up.”

The conference in Warsaw, rebranded a general Middle East conference after Poland voiced discomfort over its original Iran focus, will surely rattle Iranians, and may prompt some kind of response. But it’s largely counterproductive, raising expectations among Iranians and Iran’s neighbors that the US will never fulfill.

“I don’t think it’s going to do anything,” said Sirous Amerian, a researcher on Iran and the Middle East at the Center for Defense and Security Studies at New Zealand’s Massey University. “If the United States had any cards to play, they would have played them already.”

Given Trump’s lack of patience, he might be tempted to escalate the confrontation with Iran once he realizes sanctions alone are unlikely bring the country to its knees. But experts say Iranians have already factored possible limited US airstrikes into their calculations, and some in Tehran may even be courting them. Because the possibility of a US invasion is off the table, airstrikes pose little or no existential threat to the regime, and may even strengthen it.

“Airstrikes will have some benefits to the United States and the regime,” said Babak Taghvaee, a Malta-based researcher specializing in Iranian military affairs. “Trump will win the trust of his supporters. The regime will take advantage of them to suppress protests.”

It’s possible the United States hopes its belligerent Iran talk will cause Tehran to overreact and make a mistake, furthering its isolation. But without a doubt, it turns off potential European and Asian partners who are wary of Iran but don’t wish to encourage any new US military operations in the region.

It may be impossible for someone lacking patience such as Trump, but when it comes to Iran he would do better to “speak softly and carry a big stick.”  That’s not just some trite saying. It is how powerful, confident countries behave.

Over the years, Russian President Vladimir Putin has toned down his rhetoric while ramping up deployments of little green men to Ukraine, Syria, and even Venezuela, in attempts to stir up chaos, confusion, and disorder that the Kremlin could exploit.

China barely speaks above a whisper as it adds more and more debt-ridden governments to its portfolio of subjugated clients.

Iran and Israel speak loudly. Both are profoundly insecure about their place in the region, and in history—so they bark.

Powerful, secure countries don’t bark. They keep their mouths mostly shut and their rhetoric understated. They never promise more than they can deliver, except when consciously trying to manipulate or coax.

“Speak softly” has become a somewhat archaic cliché precisely because it was self-understood for decades. But it seems to have been largely forgotten by a certain segment of the US foreign policy elite. It’s perhaps an opportune moment to revisit its logic.

Image: Photo: An Iranian cleric walks past a mural on the wall of the former U.S. embassy in Tehran, Iran, February 21, 2007. REUTERS/Morteza Nikoubazl