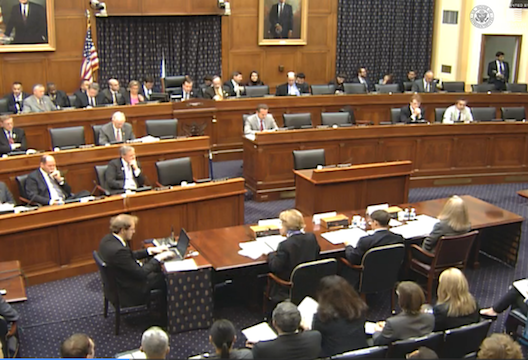 During the House of Foreign Affairs Committee hearing Next Steps on Egypt Policy,” three US administration officials, Derek Chollet, Assistant Secretary of Defense for International Security Affairs, Ambassador Elizabeth Jones, Acting Assistant Secretary of State for Near Easter Affairs, and Alina L. Romanowski, USAID Deputy Assistant Administrator for the Bureau for the Middle East, testified on the current situation in Egypt. The hearing addressed the question of US policy toward Egypt, and addressed concerns some members of congress have about the Obama administration’s recent decision to withhold some aid to Egypt. They expressed concern over how the move will affect the US-Egypt relationship, as well as how it will impact Egypt’s efforts to fight terrorism and secure the volatile Sinai Peninsula. The discussion also extended to the question of economic aid, and how the US Administration can use it to promote democracy and economic reform in Egypt.

Egypt as a Strategic Ally

The committee members and administration officials were in agreement on Egypt’s strategic importance to the United States. The military cooperation and aid grants the United States special access to the Suez Canal and over flights in Egyptian airspace, and is a guarantor for the Camp David Peace Accords. It also contributes to the prevention of weapons flow into Gaza, counter-terrorism efforts in the Sinai peninsula, and secures global commerce by providing safe transit of ships through the Suez Canal. Services Egypt provides facilitate the US military’s ability, according to Derek Chollet, to “respond to contingencies and conduct operations throughout the region.”

In early October, the Obama administration announced it is withholding the delivery of several major weapons systems to Egypt, but administration officials seem to have underestimated the effect of this decision on US interests in the region. However, according to Jones, the decision was taken after careful review, while Chollet clarified that assistance for border and maritime security, Sinai security and counterterrorism efforts would continue, as well as for “sustainment for existing weapons systems and funding for military education and training.”

The United State’s strategic cooperation with Egypt was a driving force behind the committee members’ criticism of the administration’s decision to withhold aid to Egypt. In the immediate wake of former president Mohamed Morsi’s removal on July 3, committee ranking member Rep. Eliot Engel said that he supported the decision to withhold the delivery of some military equipment, however, he no longer believes this move will encourage the Egyptian government to undertake a more democratic approach, nor will it contribute to US influence on the Egyptian government’s behavior. He stressed the necessity of the US maintaining strong military relations with Egypt, a relationship cultivated by decades of cooperation between both sides. This relationship, according to Engel, is essential to US national interests in the Middle East and North Africa. At the same time, he condemned the mistakes the military made, particularly in regard to the violent dispersal of pro-Morsi sit-ins.

For the most part, the committee members had little sympathy in regards to Morsi’s removal from office. Rep. Ileana Ros-Lehtinen said, “Morsi may have won an election, but we all know that elections alone do not make a democracy. During his time, Morsi failed to live up to the principles of a democratic society.” A fact underlined by both committee members and witnesses, Morsi failed to establish an inclusive democratic system during his first year in office.  Committee chair Rep. Ed Royce highlighted the plight of Coptic Christians under Morsi in particular, while Engel criticized Morsi’s, and the Brotherhood’s, polices while in power. A sentiment among some members of the committee was that keeping Morsi in power would have taken Egypt down a path to radical Islam. Rep. Dana Rohrabacher said, “Mr. Morsi who had been elected and used the power that he assumed in the election to try to destroy the direction of Egypt’s going to a more democratic country and instead was trying to redirect that revolution towards a radical Islamic end which would have, as I say, undermined stability.” Rohrabacher added, “General [Abdel Fattah] al-Sisi, we do know and we’re very grateful to him for stepping in to prevent this radical Islamic shift that would have destabilized the region and affected our own national security. We recognize that.”

Engel described Morsi as “a president in name only,” with the majority of Egyptians considering him an illegitimate ruler. He saw that keeping Morsi and the Muslim Brotherhood in power “would have been devastating to most Egyptians, to American interests and the interests of our allies in the region.” Engel also highlighted the fact that the Muslim Brotherhood’s early doctrines represented the intellectual and theological foundation for the “numerous militant Sunni Islamist groups, including al-Qaeda and Hamas.”

However, Rep. Gerald Connolly was the only member to condemn steps taken by the army to remove Morsi. He stressed the fact that Muslim Brotherhood’s Freedom and Justice Party won the parliamentary elections and Mohamed Morsi came to power based on “free and fair” elections. Connolly asked, “Am I to understand from that, that the United States government is saying even if you win a free and democratic election, if you alienate people in your governance, it’s OK to overthrow it?” He added, “Because I can think of some American administrations that might qualify for that.”

The United States and the Political Roadmap

The committee members and witnesses condemned the violent crackdown on pro-Morsi supporters in mid-August, as well as criticizing oppressive policies the interim government had adopted: restrictions on the press, civil society and opposition parties, the continued detention of many members of the opposition, and the state of emergency. However, they also welcomed the July 3 roadmap. Jones said, “We welcome the interim government’s commitment to a political roadmap to restore a democratically elected civilian government.” American acceptance of the interim government is in large part due to the fact that Sisi enjoys “popular legitimacy among the Egyptian people,” and that the roadmap was established in the presence of representatives of different sects of Egyptian society.

During the hearing, administration officials also announced their commitment to “advancing civil society engagement by encouraging the passage of an NGO law that conforms to international standards and Egypt’s own international commitments.”

The Necessity of Economic Reforms

Royce touched upon the economic situation in Egypt, which in his view, will continue to pose a significant challenge in establishing a stable democracy, unless genuine economic reform is implemented. He also added that the current government has maintained Mubarak’s corrupt economic model. He added that US economic aid has done little to contribute to achieving these necessary changes.

The members also expressed concern about losing leverage in Egypt due to a lack of effective economic aid policies, as well as due to the significant economic support Egypt has received from the Gulf States. “The UAE announced an additional $2.9 billion in aid for the Egyptian economy. Given the vast resources that the Gulf States have provided to the interim government, we must act in a way to preserve our influence,” Rep. Ted Deutch said.

The Question of Egypt’s Minorities

A subject broached by several of the committee members was the status of minorities in Egypt. Committee chairman Royce mentioned the burning down of a “hundred churches,” and the destruction of Christian businesses and homes. In response to a question about what the administration is doing to ensure the protection of the Coptic, and other minorities in Egypt, Jones said that the issue is an important element in ongoing between the administration and the Egyptian government. She added that the administration condemned the attacks on Copts, and called on the government to bring those responsible to justice.

The hearing clearly revealed another way in which domestic partisan politics are spilling over into the international arena, as tension between Congress and the administration is at an all time high. US policy to Egypt is certainly no exception, and has become yet another source of criticism for the Obama administration. Since Mubarak’s ouster, US policy in post-revolution Egypt has been turbulent and somewhat haphazard, due in large part to the unexpected events of 2011. The administration’s policies and decisions over the past two years and half have revealed what little leverage the US has over Egypt’s internal dynamics, much to the surprise of its policymakers and legislators. Congress clearly wants relations with Egypt to return to “business as usual,” not only to protect US interests in the region, but also to protect domestic interests, particularly those tied to American military contractors and vendors benefitting financially from the arrangement with Egypt. While President Barack Obama himself said in August that the United States “can’t return to business as usual,” one day after the hearing, speaking about the aid suspension, State Department Spokesperson Jen Psaki described it as a “pause, not a complete end.” During the hearing, Jones called on legislators to allow the administration to provide “legislative flexibility” so that the United States can maintain the programs it deems important – in other words – things will likely continue with business as usual.