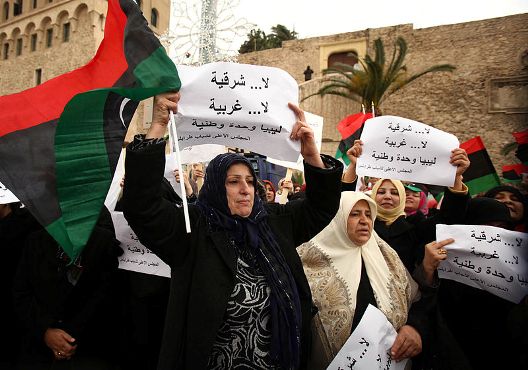 The constitution adopted in Tunisia at the end of January represents the region’s best chance at achieving an elusive goal: sustainable democracy based on the rule of law. Next door, Libya two weeks ago elected a Constitutional Assembly to attempt the same. Libya faces enormous challenges at the beginning of its constitution-making process — and should consider lessons from Tunisia in attempting to overcome them.

The February 20 elections were held in the middle of Libya’s deepest political crisis since the fall of Muammar Qaddafi, characterised by a lack of faith in public institutions and growing uncertainties over the political transition. Public opinion and some of Libya’s most powerful militias have denounced the General National Congress, the interim parliament. One militia declared that it would arrest any GNC member who did not resign on their own.

The Constitutional Assembly’s credibility has been called into question even before the results were released. Fewer than 500,000 Libyans voted out of 3.4 million estimated eligible voters. Leaders of the Amazigh and Tebu ethnic minority groups boycotted the election in protest over having been granted only two seats each out of 60, well under their estimated combined 20 percent of the population. Some polls in Libya’s south and east were not opened or closed early due to security concerns. In Derna, Islamist militias bombed polling stations and threatened to kill or kidnap anyone attempting to run for a seat, demanding that the state be run by Islamic sharia and not a constitution.

Amid these challenges, the Constitutional Assembly should consider lessons from Tunisia, where its National Constituent Assembly adopted a new Constitution on 26 January with 92 percent of members voting in favor. The process was oriented toward consensus from the beginning: each proposed article had to be adopted by an absolute majority, and passage of the Constitution as a whole required an absolute two-thirds majority.

The two-thirds majority requirement was more than a simple technical provision. Indeed, it influenced the negotiation process from the start, setting the tone of consensus in a society that was polarised over the political system and questions of identity. Membership on constitutional sub-committees was established on a proportional basis between governing and opposition partners. Opposition members served as chairmen and vice-chairmen of some drafting committees.

In Libya, the interim Constitutional Declaration of August 2011 requires the drafting committee to make decisions by a two-thirds majority. This requirement could encourage consensus, as in Tunisia. But if consensus is not achieved throughout, it could also empower holdouts in the final voting. To mitigate this risk, the committee should consider adopting rules of procedure that prevent one bloc from dominating the process. The committee might consider distributing leadership positions on drafting committees to opposition parties.

The elections for the Constitutional Assembly have shown that those feeling excluded will make themselves heard through violence or boycott. As in Tunisia, consensus building should extend beyond the 60 members of the assembly to include political parties, civil society, unions and other segments of Libyan society.

Such a consultative process takes time, and almost certainly longer than the three months laid out in the Constitutional Declaration. Libya seeks to avoid the challenges of the Tunisian Assembly, which poorly managed time expectations. The assembly took office planning to finish the Constitution in one year. In fact, it took more than two years. The assembly did not communicate efficiently on why legitimate delays were taking place. And yet it survived in part because it consulted with the public and pursued consensus between political groups.

Libya’s Constitutional Assembly may be the last best hope for a public body that can restore credibility to the country’s political institutions. The assembly will take office amid enormous challenges, including lawless militias, a weak Congress, and a flagging economy. The assembly must exercise leadership to leverage the constitution to restore Libyans’ faith in the transition to democracy, and to create a new order that might bring political stability. This is a daunting challenge, but wise decisions based on comparative best practice will increase the chances for success.