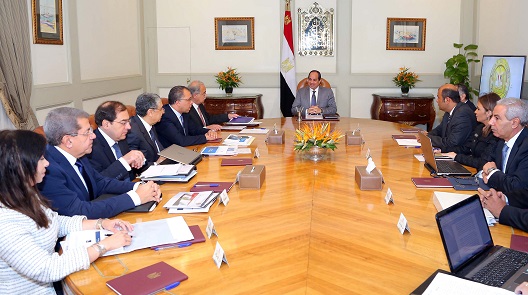 Photo: Egyptian President Abdel Fattah al-Sisi (C) attends a meeting with Egypt's Prime Minister Sherif Ismail and members of the government's Economic Ministerial Committee to discuss future economic indicators and figures of the general budget and the results of the talks with the International Monetary Fund (IMF) at the Ittihadiya presidential palace in Cairo, Egypt July 27, 2016 in this handout picture courtesy of the Egyptian Presidency.

On February 14, Egypt’s parliament approved a limited cabinet reshuffle following weeks of anticipation. Prime Minister Sherif Ismail said the reshuffle was aimed at continuing the government’s social and economic reform plans, and indeed, several of the changes reflect an effort to continue to build on major reforms. Ismail began meeting with candidates for cabinet posts in January, but a number of sources reported that several candidates up for positions in economic ministries declined offers from Ismail.

A sovereign Ministry of Investment was a relatively recent development from 2014 when the portfolio was separated from the Ministry of Industry and Trade. Khorshid’s most recent priority as Minister of Investment had been the completion of Egypt’s anticipated new investment law. While slow, it seems progress was made under her leadership in moving the law forward. The new draft law was sent to the cabinet in late 2016 before being referred to the State Council, which sent the draft law back to the cabinet with comments asking for revisions. Khorshid welcomed the process, saying that the State Council’s notes will improve the draft law before it is submitted to parliament for approval. Progress was also made over the past two years in terms of investment. In 2015, foreign director investment (FDI) grew by 49.3 percent, and FDI net inflow during the first quarter of the current fiscal year rose 35.7 percent year on year from $1.4 billion to 1.9 billion. Egypt aims to attract a total of $15 billion in foreign investment over the next three years. Egypt also approved a new bankruptcy law in January that aims to spur investment.

For her part, Nasr has been leading the charge to secure grants for Egyptian development projects from international financial institutions and international allies, a focus that will continue into this year. The merging of the investment portfolio under Nasr’s purview will allow the minister to better coordinate among major donors at a time when the country needs to grow investment and external funding. Following the cabinet reshuffle, Nasr said she would spare no effort in speeding up the implementation of the new investment law and attracting local and foreign investment. Under her watch, Egypt signed a $3 billion loan agreement with the World Bank to support the country’s reform program (at the end of 2016, the bank’s portfolio in Egypt included 25 projects and a total commitment of about $8.5 billion), a $1.5 billion loan agreement with the African Development Bank to support the country’s budget, and a $12 billion loan agreement with the International Monetary Fund. Nasr has also worked to secure funding for development projects in Egypt, and she recently said that her ministry is setting up permanent channels of communication with international partners to prioritize the financing of such projects.

A scandal took down El-Sheikh’s predecessor, Khaled Hanafi, who resigned in August amid major accusations of corruption in wheat procurement. El-Sheikh, the former head of the armed forces’ public services division, was soon named to replace Hanafi. El-Sheikh’s brief tenure as Supply Minister witnessed a severe sugar shortage following new regulations imposed by the ministry on the distribution of sugar. During the crisis, the government seized sugar stocks from one of the country’s major food producers and charges were pressed against a number of traders for hoarding sugar and pushing up prices. Days ahead of devaluing the country’s currency, the Supply Ministry raised the price of subsidized sugar by 40 percent. El-Sheikh’s tenure also saw shortages of critical goods including rice and medicine.

As Minister of Supply and Domestic Trade, Moselhy will manage Egypt’s food subsidy program and General Authority for Supply Commodities (GASC). Notably, Moselhi expressed skepticism regarding Egypt’s shift from commodity to cash subsidies due to previous dysfunction of the subsidy program. The shift in the government’s food subsidy policy from reduced prices to cash transfers is a major element of Egypt’s reform program and reportedly included in reforms urged by the World Bank. He takes office at a time when Egyptians are reeling from record-high levels of inflation. Following the reshuffle, Moselhy said he may reconsider the increase in prices of some subsidized goods including sugar and oil. The IMF has said it expects inflation to ease as the effects of the government’s reform program “wear off” and “so long as budget and monetary policies remain tight.”

The change in leadership to the Ministry of Agriculture comes after a major wheat crisis in 2016. Fayed’s ministry repeatedly enacted a controversial ban on wheat shipments containing ergot, a common grain fungus that can be toxic in large amounts, despite an international standard that allows for a minimal amount of the fungus in wheat shipments. The repeated shifts in Egypt’s ergot policy—the Ministry of Supply and the GASC were in favor of abiding by the international standard—confused traders and threatened the country’s ability to import the crucial good as multiple cargoes of wheat were turned away. Egypt is the world’s largest importer of wheat.

Al-Banna takes the lead of the ministry following two recent important decisions. Last month, Egypt announced it would streamline its import procedures and establish a registry of companies to inspect potential grain purchases abroad. The change is aimed at slowing down the process of wheat shipments to Egypt and avoiding the flip-flopping in 2016 that led to a sharp decline in imports. The government also announced that it would purchase wheat from local farmers at international market prices, hurting farmers used to higher prices from state subsidies.

Some members of parliament opposed al-Banna’s appointment due to allegations of corruption, which the new ministry denied. Following his confirmation, al-Banna said his top priority would be to promote the production of strategic crops and to support farmers by coordinating with other relevant ministries. He also emphasized the role that scientific research should play in driving the work of the ministry.

Minister of Planning Ashraf al-Araby was replaced with Hala El-Said, a member of parliament and processor of economics at Cairo University. Al-Araby, a former senior economist at the National Planning Institute, was appointed as Minister of Planning and International Cooperation in August 2012 under former President Mohamed Morsi. Among Al-Araby’s major decisions was the automation of public sector employees’ salaries in an effort to engage more Egyptians in the banking sector and a new civil service law New Minister of Planning Halal El-Said expressed respect for Araby and said that she will prioritize putting in place short-term plans to help the Egyptians adjust to the country’s economic reform measures and will work with other ministries to update services to the lower and middle income classes.

Elissa Miller is an Assistant Director at the Rafik Hariri Center for the Middle East.