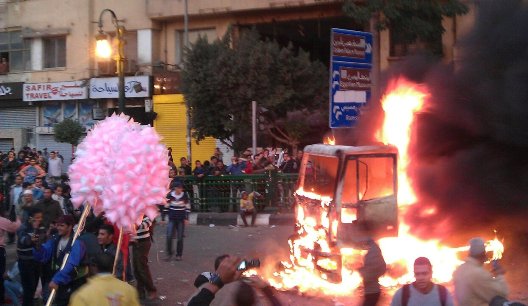 Standing in Tahrir Square the evening of November 19, 2011, as protesters set fire to an armored personnel carrier, I watched as a cotton-candy salesman joined the scene to take advantage of the rapidly growing unrest to pitch his wares. This absurdly surreal image came to mind upon hearing another bizarre news item: that of a state-sponsored memorial to commemorate the victims of the Mohamed Mahmoud street protests in 2011 and 2012. The Muslim Brotherhood and other supporters of deposed president Mohammed Morsi have naturally staked their own claims to remembering the victims of the revolution on this solemn occasion. As the Egyptian streets remain impossibly polarized and disparate political forces vie to incorporate this tragedy into their own political discourse to suit their own ends, one cannot help but wonder if anyone still remembers the truly noble and revolutionary aspirations of those who died on this day—the dream of freedom and justice.

The irony of a memorial to the victims of Mohamed Mahmoud—to be unveiled by Prime Minister Hazem El-Beblawy and other cabinet members on the second anniversary of the clashes—is clearly lost on Cairo’s governor, Galal Mustafa Said, who recently signed off on its construction. Aside from the injury of a haphazardly slapped together eyesore (surprising, given Said’s extensive engineering background) at the center of what is arguably Egypt’s most recognized national icon, the interim government effectively adds insult by honoring those whom the state has victimized.

During the 2011 clashes, the Supreme Council of the Armed Forces led by then-Field Marshal Mohamed Hussein Tantawi sanctioned the violence committed by security forces towards the massive popular protest against the ministry of interior. Security forces were directly responsible for killing forty-seven protesters and wounding hundreds more. A Cairo criminal court sentenced the notorious eye-sniper, First Lieutenant Mahmoud al-Shinnawy, to three years in prison for intentionally blinding demonstrators, but so far the lack of additional convictions or investigations into command responsibility continue to perpetuate the long standing problem of government impunity.

Perhaps the strangest aspect of the planned memorial is the dedication to victims of the June 30 uprising. While journalists and human rights organizations have identified scores of victims at Mohamed Mahmoud, no reports of fatalities surfaced between June 30 and July 3, the day of Morsi’s ouster. Equally mind-boggling, the interior ministry released a statement blaming the clashes on third party instigators associated with the “terrorist Muslim Brotherhood” looking to spill even more blood. It characterized the security forces as the first line of defense for Egypt and lamented the loss of lives for no reason.

The Muslim Brotherhood and members of the pro-Morsi camp can sadly be found guilty of the same guile in their counterclaims of upholding the spirit of the January 25 revolution. The Muslim Brotherhood recently issued an ironic press release condemning “a party that refused to relinquish power to the people” of dividing the revolutionaries and plotting to hijack the democratic transition in a conspiracy that culminated into the military coup against Morsi. The Brotherhood called on Egyptians to remember the anniversary of the clashes, not only as a day to express anger against those who “stole the revolution,” but also to ride its spirit to reclaim the rights of the people—and presumably reinstate the ousted president.

In these statements, the Muslim Brotherhood remains mired in the self-deception that plagues the movement and contributes to the political deterioration tearing at the fabric of Egyptian society. Just one day before the 2011 clashes, the Brotherhood took to Tahrir protesting against an attempt by the SCAF to institutionalize military privileges in the constitutional declaration, yet under Morsi such privileges found their way into the 2012 constitution, authored by the Islamist factions. Revolutionaries still remember well how Brotherhood members abandoned the protesters to fight the security services on this day, and on many other occasions. The divisions which they accuse the government of sowing within the revolutionaries began under Morsi’s dismal leadership and his refusal to pursue any semblance of national consensus. Justice and accountability fell victim to Morsi and the Brotherhood’s efforts to coopt—rather than reform—the ministry of interior.

And what of the revolutionaries? In this highly polarized, with-us-or-against-us hell of their own making, the Brotherhood and the military effectively destroyed the political space that January 25 fought so hard to create. Voices that often spoke of plurality and inclusion are now cast out of the media spotlight as traitors, “putschists,” or fifth columnists. Nonetheless, some principled members of this narrow, radical segment of Egyptian society still bravely speak out against both sides in the name of human rights and democracy.

Less than twenty-four hours after its completion, pro-revolutionary groups entered Tahrir, vandalizing the so-called memorial and calling the government out for its cynical attempt to rebrand the revolution in the state’s own image. Three thousand people also gathered earlier to commemorate Gaber “Jika” Salah killed during the first anniversary of the clashes in 2012. Although as yet unclear how effective it will be, The Way of the Revolution Front, the newly constituted coalition of revolutionary groups, feel they are sending a clear message that the fight for justice and accountability has not yet ended.

As vying political forces try to pick clean the bones of the revolution, Mohamed Mahmoud remains an annual reminder of the spirit of the January 25 revolution. The power of this day rings loudly in the Egyptian psyche—which would explain the desperation on the part of both the military and Islamists to claim it. Its victims are real and those who remember them will refuse to allow their memory to become a pawn in anyone’s game. Its goals, while not yet realized, will continue to plague those who wish to escape their culpability in subverting the revolutionary spirit. In short, the revolution is down, but as protesters today have shown, it is not yet out.

Tarek Radwan is the Associate Director for Research at the Atlantic Council’s Rafik Hariri Center and editor of MENASource.