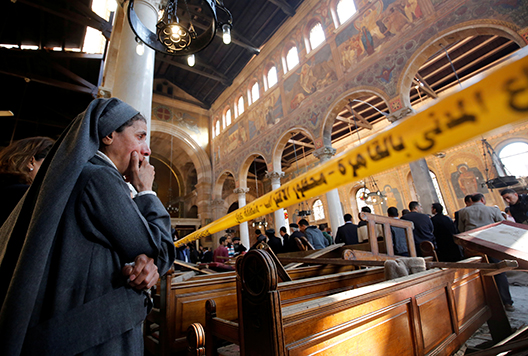 On December 11 at approximately 10 AM, Cairo time, a bomb ripped through the St. Paul and St. Peter Church in the Cairo district of Abassiya, killing 25 and injuring over 50 worshipers. Eyewitnesses described to local media a harrowing scene of devastation Cairo’s citizens haven’t felt in a long time. The explosion, which reportedly came from the direction of the women’s pews, caused the roof to partially collapse and knocked worshipers standing outside its walls to the ground. Most of the victims were women and children. There is no doubt the perpetrators intended mass carnage.

The attack was the second bombing of its kind to target Copts in recent years after 23 were killed by a suicide bomber at the Two Saints Church of Alexandria in January 2011. However, hundreds of Christians, their churches, and their property have been the target of sectarian violence ranging from lynch mobs to arson and looting throughout Egypt in recent years.

This devastating attack marks a clear inflection point in the course of what is arguably a proto-insurgency in the country’s mainland. This is for two reasons: it signals a shift in terrorist groups’ targeting to favor sectarian attacks and tolerance for mass casualty attacks against Egyptian civilians. Terrorist groups operating in the Egyptian mainland since 2011 have largely avoided targeting Egyptian civilians, and taking credit for attacks against Christians or bombing their houses of worship. This was likely due to nothing more than a concerted Egypt-specific strategy to try and avoid the mistakes of the failed insurgency of the 1990s when indiscriminate attacks against civilians failed to secure a reliable base of popular support.

The shift apparent in yesterday’s attack betrays the palatable frustration of Islamist terrorist groups operating in Egypt whose strategies have thus far failed to deliver lasting results as evidenced by their chatter and some writings. Whether it is Islamic State or Al Qaeda, agents of both groups have failed to win enough recruits and stir the chaos they intended.

It was a matter of time before Christians became a primary target and all artificial attempts to avoid civilian casualties were abandoned by the terrorists. If Egyptians had grown comfortable in believing that the terror of the Sinai is distant and that bombs only target the government, Jihadists seem to be keen in upsetting this false sense of security. They are perhaps calculating that a share of the public’s backlash would be reserved for a government that has promised security in exchange for arguably everything else. And others, specifically Islamist would be supporters, would be forced to choose whether to remain on the fence or back up their anti-government rhetoric with action. They may have been onto something with the understandably angry reaction of Copts who felt betrayed by their government for failing to protect them. A prominent pro-ISIS figure mused on his private Telegram channel to his audience that perhaps it is best for the attack to be left unclaimed in light of this. He ended his message by declaring “let it burn.”

No Claim of Responsibility

The speculation was made easier when two new terrorist groups, Hassm and Liwaa al-Thawra—both suspected of having ties to elements affiliated with the Muslim Brotherhood—quickly distanced themselves from the attack and in typical Islamist fashion condemned it while accusing the government of being behind it. It should be noted that Liwaa al-Thawra sent a death threat to a Christian lawyer before, so perhaps it either draws the line at killing Christians while praying or at least in large numbers when the majority of victims are women and children.

In the meantime, the Muslim Brotherhood in an official statement, and some of its leaders, expressed similar condemnation but not without the tired virtue signaling to their base by openly insinuating that it may have been a government false flag attack “like that of the Two Saints Church” to somehow benefit their nemesis: President Abdel Fattah al-Sisi.

Bizarrely, many still believe in the unsubstantiated conspiracy theory that the Mubarak regime was behind the 2011 church bombing. This is often a tactic used by Islamists to distract from the obvious fact of Islamist violence against Christians that feeds off the sectarianism groups like the Muslim Brotherhood actively promote. Although some of the details around the 2011 bombing remain shrouded in mystery, the originator of this particular “fake news” story seems to have been a Syrian regime aligned website that published the allegations on February 5, 2011, likely part of a disinformation campaign as at the time Assad and the “Axis of Resistance” were at odds with Mubarak.

Christians are no strangers to being victims of sectarian violence at the hands of Muslim mobs, many times Islamist-inspired, in the recent past. Most notably were the hundreds of sectarian incidents and over 80 Churches and other Christian properties that were torched by Islamist mobs in retaliation for Christians perceived role in overthrowing the Brotherhood’s Mohamed Morsi.

But what is perhaps not as well known is that Ansar Bayt al-Maqdis (or ABM), the main terrorist group operating in Egypt since 2011, is believed to have been quietly targeting Christians since 2013 without claiming responsibility. Egyptian State Security investigations allege that a string of car robberies of Christians, at least one at gunpoint, were perpetrated by ABM members with the primary goal of using them to make car bombs. The suspects would allegedly roam the streets near Churches looking for crosses in windshields since they believed, like all Islamist terrorist groups, that the property of Christians is fair “loot.” In at least one incident in December 2013, a Christian-owned jewelry store in Kafr El Sheikh was robbed at gunpoint of 3 million pounds worth of product to allegedly help finance ABM operations. Most significant was the drive by shooting that targeted the Virgin Mary Church in Giza in October 2013. Investigators allege that ABM leader Ashraf Al Gharably sent two men to open fire at the congregation. Five were killed in total, including two young girls aged 8 and 12, and one Muslim man. The other two Christian victims were 77 and 62. Perhaps at that time this prevented the group from claiming responsibility. One of the alleged perpetrators, Rabi’ Abdel Nasser Taha Mabrouk, also allegedly had planned to plant an IED in a Church in 2013 but the plot never moved forward.

ABM’s tactics (now called Wilayat Sinai) of course changed after the group pledged allegiance to the Islamic State in November 2014 as evidenced when it claimed responsibility for the murder of a Coptic priest in Sinai on June 30, 2016. Perhaps the strongest indicator of the group’s IS-ification and growing comfort with intentional mass-casualty attacks was the downing of the Russian airliner over Sinai in October 2015.

In short, this is why although the latest attack may have been new in style, it doesn’t deviate from a trajectory ABM/IS in Egypt has been on for some time.

The group may also be signaling its intent to target Sufi shrines, possibly even Sufi gatherings like mawlids, after it executed two Sufi sheikhs last November. An interview in its official Al-Nabaa newspaper with a Wilayat Sinai leader further expands on this Sufi focus (Jihadists have targeted Sufi shrines before, but this is the first time the group goes out of its way to make direct threats).

This year has witnessed new developments in how Islamist terrorists are waging their war in Egypt. Groups like Hassm and Liwaa al-Thawra have focused their energy on assassination plots of high profile figures, primarily government civilians, and higher intensity IEDs like last week’s attack in Giza which killed six policemen.

As I wrote recently, this new tactic of targeted assassinations was certain to test the government’s counterterrorism approach and the public’s confidence in its ability to protect them. The Church bombing significantly adds to this burden. Now hundreds of Christian targets across the country are at real risk of attack and require a new comprehensive plan for protection. The Egyptian public is also increasingly feeling closer to home the effects of the terrorism that has devastated many of their neighbors and could lose faith in the government. Ironically, this is due to them being protected a relatively competent security apparatus that has kept in check terrorist plots by relying on a high-cost strategy of wide dragnets, mass arrests, and expediency in using coercive methods to extract intelligence from inexpert operatives. But if Egypt does become a new serious focus for groups like ISIS, dedicating more of its resources and men to attacking it, a new counterterrorism policy will be direly needed to meet the new escalated threat.

Mokhtar Awad is a Research Fellow in the Program on Extremism at George Washington University.

Image: A nun cries as she stands at the scene inside Cairo's Coptic cathedral, following a bombing, in Egypt December 11, 2016. (Amr Abdallah Dalsh/Reuters)