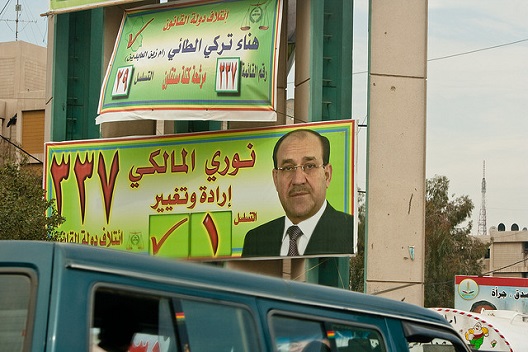 Iraqis went to the polls on April 30 to elect a new Council of Representatives, which will produce a new government and prime minister. These elections come in the face of intense sectarian violence and bring forth deeply important questions about how the government should address these and other issues moving forward. These questions will not be answered in a novel way, as present Prime Minister Nouri al-Maliki’s political opportunism has closed his grip on the Iraqi structures of governance, leaving little chance for an electoral rout of his State of Law alliance, spelling trouble for the future of Iraqi democracy.

Maliki, a man deeply involved in political Shiism, rose to power during the US-led occupation of Iraq which produced a new Iraqi constitution and quick national elections. Since that time, sectarian violence has played an important role in Iraqi politics—which Maliki and other political elites exacerbated for political gain. Maliki was emboldened by what he perceived as his success in mitigating violence after 2008. Since 2010, he has been effectively consolidating political power, centralizing authority over the military, and undermining judicial independence. With this tightening grip, Maliki has sought to marginalize political opponents, regardless of sect, under the name of national security and a fight against terrorism.

As Zaid Al-Ali describes in The Struggle for Iraq’s Future, Iraq has tried several electoral variations within proportional representation, such as open lists and closed lists, but have seen the original US-based politicians return to power each time. Maliki’s State of Law alliance saw an embarrassing defeat at the polls in 2010, but the prime minister was able to ensure he stayed in power with the help of political de-Ba’athification and a judicial decision allowing for the formation of new coalitions after the election results have been announced. In this election cycle, Iraq’s entire Independent High Electoral Commission resigned to protest political interference in the electoral process. Maliki forced the commission members to rescind their resignations. Political corruption, unfortunately, is the norm in Iraq, not the exception.

Despite the past year’s painful uptick in violence, and its likely effect of keeping many Iraqis home out of fear, Maliki has portrayed himself as the candidate for security. The appeal of stability is an important strength in the face of growing fear and prominence of the Islamic State of Iraq and Syria (ISIS)—an al-Qaeda-related group located around the porous border between Iraq’s Anbar province and a troubled Syria. When presented with shortcomings in other areas, Maliki has blamed his government for foiling his legislative attempts at governance. It is true that the previous National Unity Governments (GNUs) constrained effective governance more than they alleviated extremism. This trend partly came about because politician-brokered agreements in Baghdad’s Green Zone have no influence over the actions of the various militias. But it also resulted from governments that were formed specifically on ethno-religious grounds, with no regard for individual competencies or abilities to govern. For these reasons Maliki will aim to form a more unified governing coalition in the coming months. Less consequential portfolios and other positions may be given to outsiders to create the façade of multipartisan governance.

Structurally, Maliki has taken advantage of his ability to influence the judiciary, as well as the wide reaching membership of the GNUs to decrease both the presence and effectiveness of legislative opposition. He has also gained control over government agencies which have previously been independent or demarked for legislative oversight in the constitution. Because the president of Iraq is mostly a figurehead, Maliki’s undermining of judicial independence and the ineffectiveness of the legislature leaves the prime minister as the sole power in Iraq’s federal government, nullifying the constitution’s aim at a separation of powers. Though Maliki’s alliance continues to win elections, the context is important. While reports of outright fraud have been low in Iraqi elections post-2003, the presence of widespread corruption, continued violence, and a lack of electoral and campaign finance regulations bring into question whether today’s election can be considered free and fair.

Nonetheless, Maliki’s alliance will likely get largely undivided support from Iraqi Shiites, as well as other Iraqis who see the prime minster as the individual most able to keep Iraq together and return it to the relative calm of 2009. That view may have validity, as a third Maliki term will likely see questions of Iraq federalism sidelined while political opponents and Sunni militias will be pursued ruthlessly. However, the unfortunate ramification for Iraqi democracy will be to reward Maliki’s cooptation of democratic institutions and the politicalization of the Iraqi military. The isolation of political influence for a young democracy sprung out of authoritarianism is deeply important, as the fear of slipping back toward an illiberal state is real. However, Maliki has shown a propensity for circumventing institutional boundaries to achieve his goals and has received no international scorn to dissuade him. There is little reason to assume the next four years will be any different.