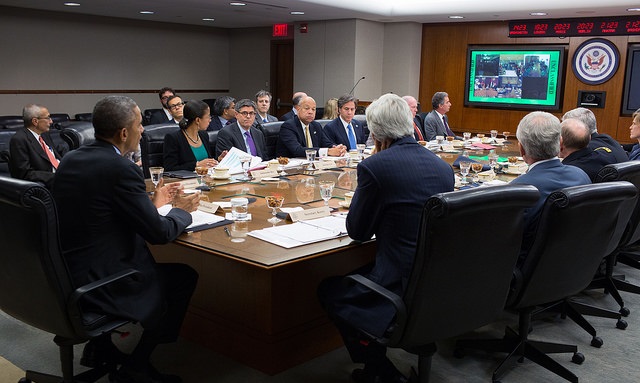 At Andrews Joint Base on March 14, 2014 President Barack Obama told visiting uniformed defense chiefs that a key aspect of destroying the Islamic State in Iraq and al-Sham (ISIS, also known as ISIL and the Islamic State) would be the promotion of moderate, legitimate governance inside Syria; governance that would ultimately be extended to all Syrians. On November 7, 2014 the White House published its strategy for “degrading and ultimately defeating ISIL:” nine lines of effort to that end. Which of the nine addressed the all-important element of moderate, legitimate governance in Syria? None. What is going on here?

For the record, the nine lines of effort are as follows:

Across the range of the nine lines of effort Syria is mention in the following contexts: denying ISIS safe-haven; helping the Syrian moderate opposition “defend territory from ISIL” (as if Assad regime barrel bombs, artillery attacks, starvation sieges, and ground probes are incidentals to be discounted); and “humanitarian assistance to the displaced and vulnerable in Syria and Iraq.”

Surely, the administration does not believe that ISIS can be destroyed—the president’s original word for the desired end state—absent decent, inclusive, and legitimate governance not only in Iraq, but in Syria. Neither does it think ISIS can be defeated—the new word—without effective governance in Iraq. Perhaps the administration is trying to split hairs by arguing that the military defeat of ISIS requires inclusive and effective government in Iraq, but not necessarily in Syria: that Syria can be treated as a mere safe-haven, but that victory will be defined in terms of neutralizing ISIS in Iraq. Perhaps by removing the word “destroy” and replacing it with “defeat” the administration thinks it has found a way to justify a hands-off approach to a regime in Syria whose existence and whose actions have been instrumental in putting ISIS on the map.

It is understandable that the United States and the coalition it has assembled have as the near-term top military priority the slowing and reversal of ISIS military momentum in Iraq. Yet something else seems to be unfolding: the virtual erasure of Syria from the equation, and less than a month after President Obama assured coalition defense chiefs that he fully understood the centrality of good governance in Syria to the destruction of ISIS. Indeed, the White House press statement introducing the November 7 fact sheet on strategy avoids mentioning Syria altogether.

Is this seeming reversal perhaps tied to the reported effort to assuage, through a secret presidential letter, the presumed concerns of Iran’s Supreme Leader with regard to US and coalition military actions in Syria? Are we witnessing a mere suspension of the new policy announced at Andrews by President Obama aimed perhaps at maximizing the possibility of a nuclear agreement with Iran being reached by November 24? Does it reflect a White House effort to perpetuate its arm’s-length approach to Syria after the June 2014 eruption of ISIS from Syria into Iraq seemed to mandate at least cosmetic changes?

These questions cannot be answered based on administration rhetoric and fact sheets. Action—or the lack thereof—will tell the story. Regardless of how the administration tries to shape public, coalition, and Syrian impressions of its anti-ISIS objectives and strategy, some fundamental facts will not go away:

If the fact sheet of November 7, 2014 truly reflects the administration’s strategy to combat ISIS, it is missing a major piece: Syria. Until that piece is covered in a way that addresses reality in Syria, the overall strategy itself will inevitably fall short of the goal of “degrading and ultimately defeating ISIS.”