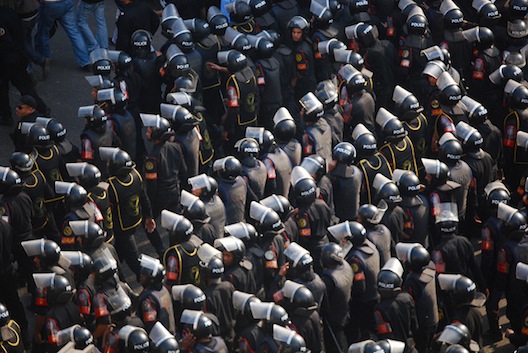 In a statement about the death of al-Jama’a al-Islamiya’s Essam Derbala at maximum security Aqrab Prison on August 8, the ministry of interior declared the cause of death was “natural.”Derbala, the statement said, was taken to hospital after complaining of fatigue, where he died as a result of circulatory collapse.  Al-Jama’a al-Islamiya and Derbala’s family contested the official narrative, saying that he died after being denied medical treatment for several months. Overcrowding, deteriorating conditions in Egypt’s prisons, and medical negligence have been documented by rights groups over the past few years, and recent deaths in detention, have led to a renewed debate over prison conditions in Egypt.

Derbala’s is the third case of its kind at this prison since early August alone. Al-Jama’a al-Islamiya leader Ezzat Salamony was declared dead on August 1, and on August 5, the interior ministry said a former senior leader of the Jihad Group, Morgan Salem, met the same fate. In another prison—al-Abadeya in Beheira—Brotherhood member Ahmed Ghozlan also died on August 1.  The ministry’s statements have declared that the deaths were all due to natural causes.

In the first week of August as well, there have been four reported deaths in police stations in Egypt—two in Alexandria, one in Cairo, and one in Red Sea city of Hurghada. The men who died in Alexandria on August 7 and 8 were suspected members of the Muslim Brotherhood group, arrested a few days earlier during anti-government protests. The interior ministry said they died due to heart failure. In Hurghada, the man was a criminal suspect who police said committed suicide. The case is pending investigation. The fourth young man who died in Cairo’s Imbaba police station was stopped at a check point, and police claimed he died after swallowing drugs. Imbaba and Matriya police stations in Cairo have some of the worst records in terms of death of prisoners held pending investigation over the past two years. According to news reports and human rights organizations, at least eleven people have died inside Matariya police station since the beginning of the year. The most prominent of these cases took place in February when lawyer, Karim Hamdy died after two days in custody at the Matariya Police Station. Two policeman have since been detained after forensic reports revealed signs of torture. In Imbaba, at least nine deaths have been reported at the police station between June 2014 and June 2015.

Derbala’s family confirmed the Interior Ministry’s statement that he was not subjected to torture. Nevertheless, they were also certain that the deterioration of his health, which finally led to his death, was linked to prison conditions. “He died because of illnesses he suffered in prison,” said Hussein Derbala, his cousin. “Sheikh Essam couldn’t bare the conditions in prison, and the overcrowded cells. They did not care about his food, and the fact that he was diabetic. The so-called hospital they have in prison is hardly a clinic, and visits to hospitals outside demand endless bureaucratic procedures,” he added.

“While al-Jama’a al-Islamiya mourns its leader and martyr [Essam Derbala], it holds the political and security authorities responsible for his martyrdom, which amounts to premeditated murder, after the prison authorities deprived him of medicine and medical care over the past few months, and after it rejected all attempts to transfer him to hospital to receive treatment despite his deteriorating condition,” the group said in a statement. “Derbala’s blood and that of each martyr who falls in the struggle for freedom will chase the killers and torturers wherever they go,” it added. The Brotherhood went so far as to accuse authorities of assassinating him.

Following Morsi’s removal and daily demonstrations by Brotherhood supporters, as well as a surge in terror attacks by armed groups, the number of inmates in Egypt’s forty-three official prisons and hundreds of police stations has increased sharply. The interior ministry has not released official figures, but it vehemently rejects allegations by the Brotherhood and local and international human rights organization that the figure was over 40,000 in the first year following Morsi’s ouster. In March 2014, an AP report quoted anonymous security officials as saying 16,000 had been arrested since Morsi’s ouster. Hamdi Rizk, a columnist and presenter of a television talk show on the private Sada El-Balad, recently wrote that Prime Minister Ibrahim Mahlab told him that the figure did not exceed 8,000.

Major General Abdel-Karim Abu Bakr, Assistant Interior Minister for Human Rights and Public Relations, said in an interview on Sada El-Balad that, more importantly, all those in prison were held legally according to judicial decisions issued by prosecutors and judges. He also stressed that prison authorities and the interior ministry investigated all cases of deaths in prisons and police stations and referred several officers to trials, while others faced disciplinary measures which affects their future career.

However, human rights groups, as well as the semi-governmental National Council on Human Rights (NCHR), whose members are appointed by the president, have pointed out—in most cases administrative detention, or imprisonment pending trial is usually renewed automatically for fifteen and forty-five days. “This has resulted in hundreds of detainees spending over two years in prison without their cases being referred to trial, which becomes a punishment in itself,” said NCHR Deputy Chairman, Abdel-Ghaffar Shokr. Interim President Adly Mansour’s decision to issue a decree in 2013 canceling a law limiting pre-trial detention to a maximum of two years has only exacerbated the situation.

The NCHR’s latest annual report covering the period between Morsi’s removal on July 3, 2013 and the end of 2014, said at least thirty-six people died in detention, according to interior ministry figures. The report also noted that local human rights organizations believe that figure is closer to 100. The deaths were caused “mostly due to deteriorating living and health conditions and sharp density in temporary areas of detention in police stations and prisons,” according to the NCHR. The report added that the density rate in police stations amounted to 400 percent, while it reached 160 percent in official prisons, “which makes life very difficult inside those places.” The report also noted that “there was no evidence that those deaths were a result of torture, but there was also no evidence to deny that. In all cases, there is an urgent need to solve the problem of overcrowded detention facilities,” it concluded.

According to Mohamed Abdel Wahed, a university student who spent thirteen months in prison in administrative detention, the worst period of detention is usually inside police stations. “Our only dream and hope was to leave the police station and get moved to an official prison,” he told EgyptSource. Police station prisons suffer from extremely overcrowded cells without proper ventilation, a lack of food or medical care, filthy toilets, the and lack of a sewage system.

Shokr, deputy NCHR chairman, confirmed that several requests to visit prisons, including Aqrab, were denied or delayed. “Egyptian prisons are extremely overcrowded, which leads to the spreading of diseases among inmates. There is also lack of proper medical care, especially at Aqrab Prison.We need proper doctors in prison hospitals,” Shokr said. He added that several cases of reported death were caused mainly due to delays and complicated procedures in transferring cases to outside hospitals. According to testimony gathered by rights group, the Egyptian Initiative for Personal Rights (EIPR), most doctors who work in Egypt’s prisons are “young, inexperienced non-specialists.” Some inmates told the rights group they never saw a doctor during their incarceration. “Former inmates attributed this to the lack of trust in the competence of physicians or the doctor’s irregular presence,” the report said. EIPR’s report adds that some prison hospitals are sorely lacking in terms of equipment and medicine.

Negadal-Boraie, a lawyer and human rights activist, said that human rights organizations face a very difficult task in attracting attention to the serious problems in Egyptian prisons due to the ongoing war against terrorism. During the same week all these death cases were reported in prisons and police stations, attacks took place in Cairo, Fayoum, Suez and Sinai, killing several army and police officers. “This has led a reasonable segment among the public to disregard the explosive conditions in prisons, and it is not uncommon to hear some television commentators or columnists saying we should not raise such issues related to deaths of terrorists in prisons, while our officers and soldiers are dying on a daily basis all over the country,” Boraie said.