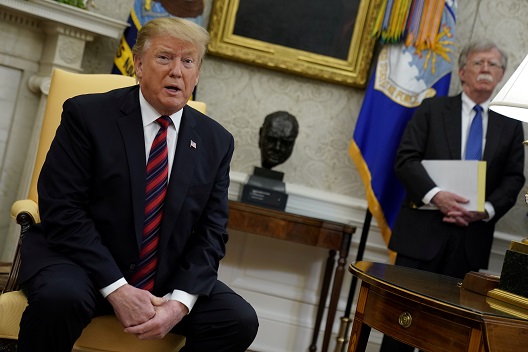 Photo: U.S. President Donald Trump speaks to reporters with National Security Adviser John Bolton looking on in the Oval Office at the White House in Washington, May 3, 2019. REUTERS/Jonathan Ernst/File Photo

Since his election, US President Donald Trump has pursued a maximum pressure policy toward Iran, in an attempt to push Tehran back to the negotiating table. Yet, despite increasing US pressure on Iran, tit for tat statements, and subversive operations in the Persian Gulf, Tehran is far from willing to antagonize Washington to the point of no return.

On April 22, President Trump put an end to waivers allowing several countries to buy Iranian oil to drive Iranian exports down. New measures are expected to drive Iran’s oil exports down even further from about 1.1 million barrels a day to less than 300,000 barrels a day. This would severely damage Iran’s already-hurting economy; already reeling from US withdrawal from the Iran Nuclear deal. In 2018, the US administration abandoned the 2015 Joint Compressive Plan of Action (JCPOA) crafted under the US Presidency of Barack Obama, reintroducing massive economic sanctions against Tehran.

Trump’s goal is to broaden the scope of the deal to include long-range missiles and support for terrorism. In early April, the US also named Iran’s Revolutionary Guards Corp (IRGC) as a terrorist organization. In response to Trump’s new measures, Iran threatened to strike back at the United States, namely by closing the Strait of Hormuz, a vital conduit for commercial shipping and more importantly oil trade.

More than eighteen million barrels a day travel through the Strait, according to 2016 figures, which represents around one third of all seaborne crude, as well as 30 percent of seaborne natural gas. Iran maintains a heavy military presence along the northern coastline, which could theoretically be closed off by the IRCG thus hurting international trade and more specifically US allies hydrocarbon producing countries such as Saudi Arabia, the UAE, and Qatar.

In early May, the United Arab Emirates reported the targeting of four commercial vessels, sabotaged near Fujairah, outside the Strait of Hormuz. Saudi Arabia identified two of them as Saudi, and a Norwegian company said it owned another while the fourth ship was a storage tanker flagged in Sharjah in the UAE. A few days after, two oil pumping stations in Saudi Arabia were the target of terrorism and sabotage by Yemeni Houthis. The Houthis are considered close allies of Tehran. On May 19, US Embassy Baghdad was the target of a rocket attack, yet no group claimed responsibility for the bombing.

The attacks, subversive in nature and where responsibility is ambiguous—despite US accusations against the IRCG in the case of the tankers’ sabotage —show Tehran’s continued preference for indirect operations, perpetrated by anonymous or smaller factions whose loyalty is open to interpretation. The target of the attacks, Gulf tankers in the first occurrence and Saudi pipelines in the second, underline that Tehran also prefers to focus its wrath on US allies; instead of direct US interests that could trigger a much more painful backlash from Washington.

Besides the Strait of Hormuz, Tehran will operate cautiously at the regional level, for various reasons ranging from avoiding an irremediable escalation, or because of geopolitical realities that constrain its margin to maneuver.

Iran currently operates in Lebanon, Syria, Iraq, and Yemen through a network of violent non-state actors, which amount to around 300,000 fighters, closely loyal to Tehran. In Lebanon, Hezbollah has about 60,000 fighters, in Syria. According to figures provided to the author by Hezbollah expert General Amine Hoteit. The pro-Iran Local Defense Forces boasts about 90,000 members according to Syria expert, according to an interview the author had with Aymen Jawad Tamimi in May 2018. The Houthis are believed to have around 100,000 fighters in Yemen while the Popular Mobilization Forces in Iraq amount to around 150,000 fighters, one third of which are believed to be comprised of pro-Iran elements.

Yet, Tehran is not interested in directly involving these various forces into a showdown with the US. Hezbollah is facing several challenges in Lebanon starting with an economic crisis that is shaking its foundations, and its priority, as well as Iran’s, is to consolidate power locally for now. Thus utilizing Hezbollah in the current escalation is not an option. In nearby Syria, Iran can count on the local defense forces (LDF) from the Syrian regime. However, these forces are heavily constrained by Russian interference; which allows Israel to target Iran and Hezbollah without a response.

In Iraq, Iran will not take the risk of being linked directly to attacks on American interests by one of its main proxies, such as the Badr Organization or Assaib Ahl Haq. Pro-Iran Iraqi organizations also have their own strategic calculations, and both factions have denounced attempts to incite a regional war from Iraq, after the recent US embassy attack. It might favor operations led by smaller groups whose loyalty is ambiguous.

Two options remain for Iran: targeting US allies such as Israel and Saudi Arabia, either via organizations such as the Islamic Jihad or the Houthis. This could be the preferred course of action for Tehran and the most limited in terms of damage. Leveraging these groups increases the asymmetry of the fight and adds plausible deniability for Tehran.

The mood in Washington also does not seem to indicate a willingness from the Trump administration for further escalation. This week, during a press conference in Japan, President Trump denied he was seeking regime change or wanting to hurt Iran; flipping from an earlier tweet this month warning that Iranian threats would mean the “official end” after the rocket attack near the US Embassy in Baghdad.

Yet a miscalculation could always happen. The United States deployed a carrier strike group and bombers to the Middle East and an extra 1,500 troops to the Persian Gulf. The US 5th Fleet is also stationed in Bahrain, and the carrier Abraham Lincoln is cruising in the area. The Revolutionary Guard spokesman Ramezan Sharif warned US troops in the region against making any mistake against Iran, stressing that his country is ready to confront any aggression.

Adding to the risk is the hawkish positions of security adviser John Bolton and the absence of top-level diplomatic relations between the two countries. Yet for now, it seems that regional gesturing will remain the preferred course of action for Iran, while in DC, the administration’s aversion to regional military adventurism does not appear to have changed.

Mona Alami is a nonresident senior fellow at the Atlantic Council’s Rafik Hariri Center for the Middle East.