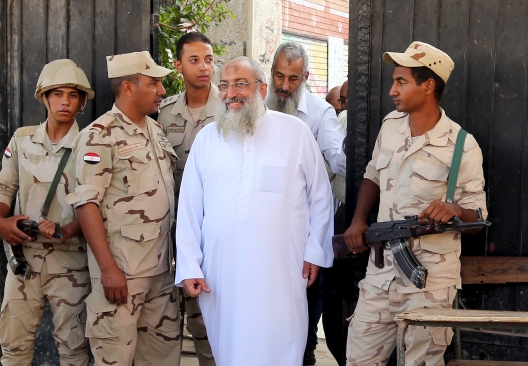 A new Egyptian parliamentary election cycle is underway. With it, Egypt’s Nour Party—the political arm of the Alexandria-based Salafist Call movement—is facing one of the most difficult tests it has encountered since the party’s founding in June 2011. Preliminary results indicate that the party is failing that test.

The party’s main challenge lies in its lack of political allies and support—whether among Islamists or secularists—and it appears isolated in Egyptian politics. Despite that, it is the Islamist camp’s primary representative in the current parliamentary elections, as it attempted to position itself as heir apparent to the space once occupied by the Muslim Brotherhood, at the head of Egypt’s Islamist movement. Until now, it has been impossible to empirically assess the Nour Party’s ability as the Brotherhood’s successor as the main opposition faction for two reasons. First, the party had already aligned itself with most of the decisions of the current political leadership, and second, until now, there had been no opportunities in the past two years for it to demonstrate its electoral abilities.

The authorities, meanwhile, have not interfered with the Nour Party, other than appearing to shield it from the article in the constitution that bans religious parties. Article 74 in the 2014 constitution prohibits parties formed on a religious basis, resulting in several lawsuits filed against Nour. Despite this, the courts have continuously ruled in the party’s favor, citing a lack of jurisdiction.

Before and during its official campaign, the Nour Party undertook several measures to present itself in the best light possible to the political authorities and the general Egyptian public.

The Nour Party’s campaign speeches and media interviews have focused on three fundamental ideas. The first highlights its ability to stay within the lines imposed by the political authorities. They mention seeking to prevent the country from succumbing to the same fate as Syria and Iraq in the fight against terrorism and extremism; accepting ballot box results; gradual reform; and an opposition movement steeped in patriotism. Since the party’s announcement more than a year ago, that it will compete in the elections, these talking points have been repeated in television interviews, press conferences, and town hall meetings. In so doing, the party seeks to counter accusations that, as a religious party, it does not believe in these concepts. The Nour Party wanted to send a message to voters and the general public that it does believe in a political structure based on the state model, that it does not threaten the security of that system, and that it will not cross the lines imposed by the authorities.

Second is the issue of Islamic identity. Before the party was officially formed, its leadership belonged exclusively to the Salafist Call. Following the January 2011 revolution, it was the first to raise the issue of the identity of the state in the March 2011 referendum—when Islamists pushed for a vote in support of constitutional amendments as a vote in support of Islam. This was the Nour Party’s central focus throughout the post-revolution era, and became the primary mechanism through which it sought to distinguish itself from its rivals. The party proposed a strict vision for the role of religion, and accused the Brotherhood of using the guise of religiosity to expedite its own political ambitions and of siding with secularists. These same themes also appeared in the party’s 2011 elections slogan, which focused on Islamic identity: ‘Together we will build Egypt; Identity and the modern state, built with Egyptian hands and minds.’ “Our goal in entering politics is to protect the Islamic identity of Egypt,” Nour Party candidate Mohamed al-Taweel said in 2011.

The Nour Party promoted these ideas primarily through its support of the second article in the constitution, which states that Islam is the religion of the state. Around 2012, as it embraced the pragmatic nature of politics, it started using identity politics as a weapon against the secularists, accusing it of neglecting Egypt’s Islamic identity. In 2015, however, cognizant of the perceptions of Islamist politics, it chose not to highlight its religious character in its electoral slogans, evidenced by this electoral cycle’s slogan of ‘Clarity and Ambition.’

The third and final idea focuses on the party’s ability to reliably provide services. In light of the country’s current economic conditions, it would appear that the Nour Party hedged its bets on the fact that the Egyptian voter views its parliamentary representative as a vehicle of services more than a vehicle of legislation. This idea manifested itself in the speeches of Nour Party candidates from outside the party leadership, who focused on proposing solutions to local problems that directly affect their constituents, and refrain from talking about comprehensive, overarching political and economic programs. This was made clear during the electoral campaign and in statements to the media. In doing so, the Nour Party sought to convince the average, politically-indifferent voter that it is the party of practical solutions that can resolve urgent, everyday problems of life.

Challenges and Opportunities for Success

These efforts do not appear to have generated the results needed to restore the Nour Party back to where it was four years ago, when it was the second largest block in Parliament with 22 percent of the seats. This can be explained through a series of challenges the party faced.

Challenge No. 1: The Islamist fragmentation into anti-government groups. This development has drastically reduced the Islamist movement’s public presence and political participation. Many Islamists openly oppose the Nour Party and label it a traitor to the Islamist camp for its role in the overthrow of former president Mohamed Morsi, so much so that they now call it the Zour party—Arabic for ‘falsehood.’ Many of the party’s detractors are Salafists themselves, who either left the party or belong to other Salafist currents. As a result, they are capable of formulating messaging couched in the same religious references and doctrines as the Nour Party, which undermines the public image the party seeks to promote.

Challenge No. 2: The multi-pronged attacks of the secularist currents. These attacks began long before the announcement of the Nour Party’s most recent election campaign. In reality they stretch back to January 2014 when privately held television channels began accusing the Nour Party of failing to provide the needed votes to generate support for a ‘yes’ vote in the constitutional referendum. The Nour Party also lacks access to major media platforms unlike its opponents, such as the Free Egyptians Party and the For the Love of Egypt coalition. The Nour Party’s portrayal in the media and its inability to offer a counter narrative at the national level undermines perceptions of the party among the general public.

Challenge No. 3:Widespread doubt in the party’s Islamic credentials. Critics point to the fact that the party complied with the legal mandate that it nominate Copts and women on its electoral list, in clear violation of its party doctrine. They even allowed female candidates to address the public through their YouTube channel and at party rallies. It justified these measures to its members by claiming that they were a necessary political compromise and a case of the ends justifying the means. These statements led many to conclude that the party has not truly revised its stance on women’s and Copts’ participation in political life, and as a result, many Egyptians and former party members view the party as opportunistic.

As part of their electoral campaign, the Nour Party also released two music videos titled “Clarity and Ambition” and “O People,” each lacking musical instruments and a female presence. A few Christian names did however appear in the final credits, but in such a manner that it appeared to be a deliberate attempt to spread its “inclusive” messaging.

A leaked recording, aired on satellite channel OnTV, however, alleges to show Nour leader Younis Makhioun urging party members and its core supporters to participate in voting on the second day of elections. In the leak, which has not been verified, Makhioun said the party should take advantage of low voter turnout, to swing the results in their favor. He also commented on “significant participation by Coptic men and women” on the first day of voting, as well as others who were paid to vote. By contrast, he allegedly said, the party’s supporters were principled. Until the publishing of this article, the party has not commented on the recording.

It appears that these reasons, together with the overarching political and social climate, resulted in the Nour Party’s inability to replicate the results it achieved in 2011. It is only competing on two of the four lists, fielding fifteen candidates in the West Delta, and forty-five in Cairo and Middle Delta. It is also competing for less than 50 percent of the individual seats, fielding a total of 200 candidates in both phases. By contrast, in the 2011 elections, the party contested 100 percent of the seats.

The Nour Party is embracing this practical political tactic in which it continues to make political concessions in exchange for the ability to move freely in the public domain, which has been the party’s policy since July 3. Preliminary results in the first phase of the elections indicate that the party has been dealt a serious blow in its stronghold areas, and the party is reportedly considering withdrawing from the elections. In the West Delta, its electoral list is said to have lost to For the Love of Egypt, and out of 160 independent candidates, the party says only twenty-four are in the runoffs. Hours earlier, the Nour Party’s Salah Abdel Maaboud wrote on his Facebook page, “Nour Party youth, don’t panic. Instead let us hope that there will be good news from God at the end.”