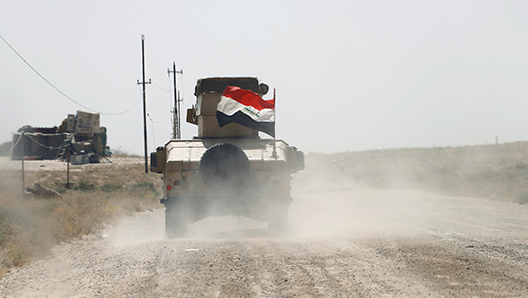 A military vehicle of the Iraqi army is seen in Falluja, Iraq, June 17, 2016. (Thaier Al-Sudani/Reuters)

Prime Minister Haider al-Abadi appears to have launched the sudden assault on the city of Fallujah last month in an effort to distract from the political turmoil in Baghdad. And to some extent, it has worked. Popular support for the fight has won the prime minister a short political reprieve, and the media landscape has replaced extensive coverage of political drama in Baghdad with blow by blow accounts of the battle for Fallujah. But the fault lines threatening to pull apart Baghdad’s political establishment remain unchanged, and the military successes in Fallujah are fragile and still incomplete. If the counter-ISIS coalition, led by the United States, urges the Iraqi government to address the political war in Baghdad, it has a better chance of seeing a stronger government in Baghdad that is also able to consolidate and extend the military gains in Fallujah.

The prime minister announced the surprise effort to liberate the city of Fallujah on May 23, just days after Sadrist protestors breached the Green Zone for the second time in two weeks, and after months of planning for an attack on the higher priority city of Mosul. Although Iraqi forces, mainly from Shiite militias, or Popular Mobilization Units as they prefer to be known, had long surrounded Fallujah, there had been little effort to retake the city, with the central government and the anti-ISIS coalition’s gaze fixed firmly on the key ISIS stronghold of Mosul. But the escalating political tension in Baghdad changed the calculus. Faced with robust street protests and threats of violence against government institutions, and with a parliamentary bloc bent on ejecting him from power, Abadi needed a fast political win to save his administration. And Fallujah, a city with 100,000 remaining residents, rather than Mosul with its 2 million residents, gave Abadi a chance to change the story.

For Iraqi Shiites, destroying ISIS in Fallujah has been immensely popular. Fallujah has long been seen as a bastion of anti-Shiite extremism, and a ‘car-bomb factory’ that is responsible for countless suicide attacks on Shiite neighborhoods in Baghdad. In May of this year, a series of car bombs targeting Shiite parts of the capital city killed over 90 civilians in a single day, a tragedy that prompted an outpouring of anger against the Iraqi government for not doing more to protect the security of Shiite civilians in Baghdad. For these Shiites, the government’s retaking of Fallujah was long overdue, and the relative efficiency of the battle is celebrated – it took just four weeks for Iraqi forces to declare victory in Fallujah, compared to ten weeks in the battle for Ramadi.

But Sunni leaders have had a more mixed reaction to the assault. Human Rights Watch said in April that a months long-siege of Fallujah, mounted by the Popular Mobilization Units and other Iraqi forces, led to mass starvation. While Sunni leaders objected to the siege as a form of collective punishment, militia leaders such as the notorious leader of the Iran-backed Badr Organization Hadi al-Ameri insinuated that the civilians remaining in Fallujah were all ISIS supporters. This inability to distinguish between the innocent and the guilty continued during the assault on Fallujah, when civilians fleeing the city were subjected to screenings in which some men were transferred into militia custody where they were reportedly tortured, forcibly disappeared, or killed. Anbar Governor Suhaib al-Rawi accused the Popular Mobilization Units of murdering 49 civilians in the Fallujah suburb of Saqlawiya, of systematically torturing males during screenings, and of being responsible for the disappearance of 643 men.

Abadi has tried to put a stop to these abuses, forming a committee to investigate the excesses and arresting a small number of suspected perpetrators, but his capacity to enforce the law is limited by his fragile grip on power in Baghdad.

Opposition MPs in the Iraqi Parliament held a sit-in to try to force Abadi from power earlier this year but failed to gather the numbers they needed to oust the prime minister. Meanwhile, Abadi has also failed to win the support he needs to pass meaningful legislation, including reforms demanded by anti-corruption protestors and disgruntled Sunni communities. Iraq’s government is stuck in a quagmire, and although Fallujah has been a distraction, the dissatisfied civilians who spent months of 2015 and 2016 out on the streets have not forgotten and will not cease to agitate until something is done to break this deadlock. The battle for Fallujah was simply a moment of calm in the political storm, and is not likely to last. Moqtada al-Sadr has already promised a ‘million-man march’ in the coming weeks, and Sunni leaders are watching closely as poor planning by the Iraqi government and partner aid agencies has thrown Fallujans from one humanitarian catastrophe into another. In further evidence of the hasty, and unplanned nature of the assault on Fallujah, provisions for the 85,000 civilians who have fled the city have been abysmal, with the UN admitting that its camps can only house 16,830 of these newly displaced Fallujans.

If member-states of the anti-ISIS coalition encourage Abadi to refocus on winning support among the political blocs in Baghdad, his government will be far more likely to consolidate its fragile gains in Fallujah. Partnering with Sunni leaders to rapidly respond to the needs of Fallujan civilians will help the government win over these key local stakeholders, to prevent the success of ISIS counter-assaults, and to persuade Sunnis to support the assault on Mosul. And building cross-sectarian partnerships to deliver on governance and anti-corruption reforms is essential to bolstering Abadi’s grip on power vis-à-vis hardline Shiite militias, leading to better prospects for a sustainable peace in Iraq in the medium-term. While the battle for Fallujah hit pause on the political turmoil in Baghdad, it did not reset the game. It’s time to get back to the board to make sure this victory counts.

Dr. Nussaibah Younis is a Senior Resident Fellow at the Atlantic Council where she directs the Task Force on the Future of Iraq.