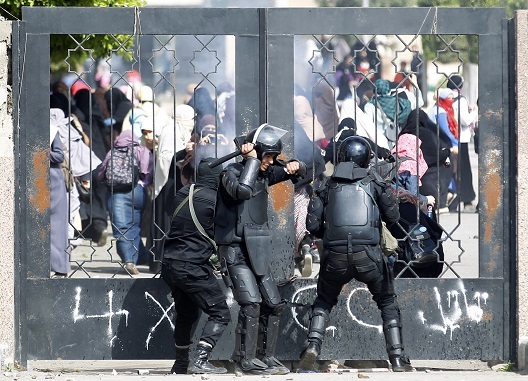 In a continuation of their confrontation with the Muslim Brotherhood, the Egyptian authorities arrested two Muslim Sisters, Dr. Hana Badr al-Din and Sara Abdul Moneim, during their visit to al-Qanater prison with the family of one of its prisoners. Recently, the Brotherhood’s Fund Inventory Committee has included the names of several women with relatives among the Brotherhood’s high-ranking leadership.  Since breaking up the Rabia al-Adawiya and Nahda sit-ins, the way security authorities have dealt with the women’s branch of the Muslim Brotherhood, known as the Muslim Sisterhood, has deviated from policies dating back to the Sadat era of not hassling or arresting women adopted by previous regimes.

This analysis sheds light on these roles in order to examine how they contribute to preserving the Brotherhood’s existence, through the voices of the Sisters themselves.

There was something remarkable about the rate of female participation in the demonstrations that followed the dispersals of the Rabia al-Adawiya and Nahda sit-ins. A significant portion of every demonstration was women, so much so that they were forming their own entities to organize demonstrations, led by Women Against the Coup, which specializes in monitoring the general affairs of women during demonstrations, and Girls Ultras Azhari, which used to lead the 7 AM Girls Movement, a female students movement at al-Azhar University.

Mona (a pseudonym), one of the Sisterhood’s most prominent members in Egypt, explained that “key roles were played by all kinds of women during the demonstrations, some of whom have family members who are martyrs, detainees, or are hunted by the authorities, and others that have not been exposed to such pain.” The existential threat to Brotherhood family structures, in addition to a rise in emotion that was impacted by oppressive and adverse rhetoric, prompted the Sisters to play this part, which has preserved the presence of the Brotherhood in the street. “When a woman commits to a cause, she’ll sacrifice everything for it. She has a lot of tricks to get what she wants,” says Mona.

“If participation is the first role to be strongly played by the Sisters within the Brotherhood, then the greater and central role in preserving the Brotherhood’s existence is fundraising and economic in nature,” said Taghreed (a pseudonym), one of the Brotherhood’s activists in Alexandria. She also said, “the security disaster was enough to keep everyone away from the Brotherhood, especially [it’s] largest sources of funding, who were either arrested or had their money confiscated,” adding that, “most of the economic support that went to the Victims Committee, which provides for the families of detainees and children of martyrs, came from women.”

Sana (a pseudonym) explains further: “At the beginning, it took place via traditional means of collecting donations from members working with or sympathetic to detainees and the children of those who died, and distributing [the donations] to them, which was executed by the Charity Committee. But as time went on and the circle of damage widened, the Charity Committee became what is called the Victims Committee. We needed to look for unconventional ways of providing families and detainees with a primary source of income. That’s when we got the idea to invest the money we collected into small businesses employing the sons and daughters of detainees and martyrs and generating a stable, reliable income, like nurseries, women’s clothing boutiques, and transportation projects for young men, among other things,” adding, “that this sets the money in motion and benefits the injured and oppressed with moral services such as work or with a simple material return that will enable families to do away with people’s questions and avoid begging.”

Sana also explained that roles such as these did not used to be carried out in this way by the Sisterhood, pointing to the expansion of such activities after the targeting and arrest of the men responsible for the Victims Committee in 2015. Added to that are all the women and their daughters who went out to work, some of whom started managing their husbands’ private businesses, as doctors in clinics, lawyers in law offices, and other private professions. Not many of the Sisters stayed at home just to be housewives. Instead they began to support entire families.

Those who follow the Brotherhood probably know the groups social cohesion and integration with the larger society lie at the organization’s core. It’s no surprise then that social cohesion was the Sisterhood’s biggest concern, which is where the Sisters, according to Mona, proceeded to “establish an entire committee of women responsible for the children of detainees and martyrs to provide them with educational programs. The matter isn’t limited to a sentimental role either, we are raising the next generation of Brothers to carry the flag of da’wah,” indicating that this is one way of preserving the organization. In her view, it is important “to keep the idea going and to build up the next generation capable of shouldering the burden, which is what is currently taking place, even if its composition has been shaken and the rank and file of the previous generation has become divided.”

Mona offers a practical example with one of the main ideas the Sisterhood is implementing with children. She says they are “reintegrating the children of detainees and martyrs into society by organizing trips and activities in public venues so that they do not feel like they are alone or that they are not part of the community.” Despite the difficulties, she stresses that, “the idea of the Muslim Brotherhood is based on advocacy and involvement in the community, not isolation,” noting that they want to ensure that children and generations of young people do not grow up to hate their surrounding community, “even if it does them wrong from time to time or is silent about what is happening to them.”

One of the criteria for community cohesion is the survival of the family structure. Mona points out that the usar of many men have broken down, but women’s families continue to thrive with an educational and advocacy approach, saying that, “the duties delegated to men and women have become very similar since women entered the field.” (Usar refers to Brotherhood families, which is the designation for the lowest unit / group within the Brotherhood, usually consisting of four or five members and lead by a ‘capitan.’)

Sisters have stepped into the media role to help recover the Brotherhood’s negative public image was one of the greatest losses to come out of overthrowing Mohammed Morsi. Government authorities targeted the young men of the media groups who had knowledge of how to work in the media. Additionally, the Sisters saw a need to publicly present the effects of the crackdown on individuals within the Muslim Brotherhood.

Hiba Zakaria, a media researcher who monitors the activity of female Islamists, told MENASource that those who most contributed to “once again humanizing the Brotherhood, were women.” She adds, “the Sisterhood’s media focus on what happened to them, their families, their life stories, and their suffering contributed to adding a human dimension to the issue.”

Likewise, Taghreed indicates that the Sisters “consciously worked to increase the Sisterhood’s media capabilities, even giving rise to a staff which manages social media pages and has the ability to film and document, so the documentation and rights aspect of media was carried out by girls. Anyone who knew a foreign language got in contact with foreign media outlets and human rights organizations, while all the young girls who graduated from law school sought work in law. Previously it would have been unheard of for the Sisters to play these roles within the Brotherhood, but they have greatly reduced the burden on families, whether it’s been getting visitation permits or documenting violations against their families.” Taghreed also points to the individual advocacy and the psychological and medical support provided by Sisters in the course of their roles within the community or prison visits that are not just limited to the children and family of Brotherhood members, rather the mission of “instilling and implanting truth in the soul extends to the surrounding circles.”

In practice, this aspect may be the weakest link in the Sisterhood’s role due to their lack of experience, because Brotherhood regulations do not involve women in leadership positions with the authority to make decisions.

However, according to multiple sources within the Brotherhood, some provinces no longer have any organizational activity or administrative structure, which allows Sisters to assume administrative functions, especially those managing and running the daily lives of Brotherhood members.  Mona indicates that “women officially participate in all Brotherhood decisions and matters,” and that “women are partners in formulating Brotherhood policy and vision.”

After the Brotherhood officially split into the front of Secretary-General Mahmoud Hussein and that of Ibrahim Mounir, the Sisterhood became the pivotal link between the two. “There is an internal agreement that achievements on the ground remain everyone’s goal, and that women will avoid engaging in administrative disputes. They don’t differentiate between children or work based on this dispute, ”explains Mona.

Taghreed says that the Sisters, “are not affected by the division because they are in the field. They are in positions of responsibility and have a clearer idea about the stability of the Brotherhood.”

In spite of all these overlapping roles that have contributed to the Brotherhood’s preservation in the community, no one knows what the actual place for women within the organization will be in the future. Estimates of women’s participation in the Brotherhood range from 30-50% according to the key Brotherhood personnel and leadership we talked to. Ahmed Rami, the former spokesman for the Freedom and Justice Party, believes women “grabbed power by imposing their roles during the upheaval of the last few years, rather than through any changes to the Brotherhood’s regulations, which, in the current security situation, does not allow for modification.”

However, in a new step for the organization, the Brotherhood’s Shura Council in Turkey witnessed the election of its first female member during its most recent election, but no one knows the extent to which those involved are content with generalizing the experiment, whether it was a cosmetic step, or a genuine change in the convictions of the Brotherhood. Sisters have previously sought to take on major roles in the past, but with little success.

Image: Photo: Riot police attempt to break open the entrance of the al-Azhar University Campus during clashes with female university students, who are supporters of the Muslim Brotherhood and ousted Egyptian President Mohamed Mursi, in Cairo's Nasr City district, March 19, 2014. The protest was held against the military and interior ministry as students try to block Moustafa al-Nahas street. REUTERS/Amr Abdallah Dalsh