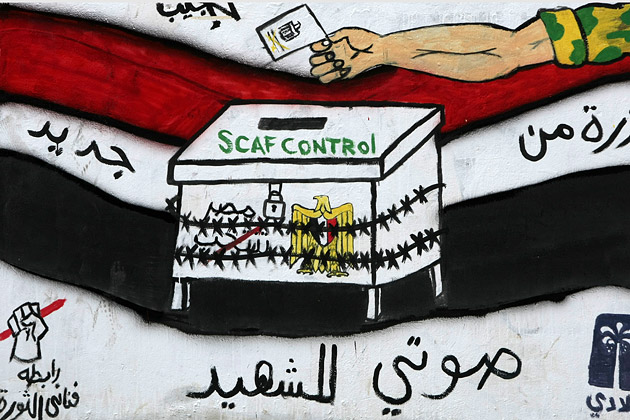 The presidential elections were met with high expectations in Egypt. Yet the results of the polls have brought much disillusion and disappointment, forcing second-round voters to choose between the Muslim Brotherhood’s candidate (Mohamed Morsy) and an ex-regime candidate (Ahmed Shafik), who together won only half of the vote in the first round. After the official results were announced on May 28, revolutionary groups protested in Tahrir Square, contesting the results and particularly calling into question the success Shafik, who was nominated prime minister by Mubarak’s during the 2011 revolution. It is still early days for democracy in Egypt and for the grassroots revolutionary movements – credited as the catalysts for the revolution – just the start of a process to convert street activism into the political leverage needed to lay the foundations for a democratic culture.

Since election campaigning began, enthusiasm for political debate has been high across Egypt. Heated discussions about the presidential candidates sparked amongst strangers everywhere from metro carriages, to coffee shops, to museums. One woman I spoke to compared this phenomenon to a new fashion, which, like a soap opera, has become the hottest topic of discussion in conversations with friends. Yet, debate is not the only element of a democratic system. Other tools are required to negotiate electoral success.
The revolutionary movements are learning this the hard way. Prior to the elections, Mohamed Nabil, an April 6 activist, commented in an interview, “The ideal is for a revolutionary president. We will stand with him to remove the military and achieve justice for the revolution’s martyrs.” The unsuccessful revolutionary candidates in the first round represented leftists (Hamdeen Sabbahi and Khaled Ali), seculars (Abul-Ezz El-Hariri and Abdallah al-Ashaal) and moderate Islamists (Abdel Moneim Aboul Fotouh). Some also included Mohamed Morsy in, this camp, although the Muslim Brotherhood’s revolutionary credentials have been questioned. The non-revolutionary candidates are those associated with the former regime. Yet, many of the revolutionary groups organised campaigns against old-regime candidates, notably Shafik. This meant that their own votes and campaign efforts were not concentrated on supporting one candidate. While the combined votes of the separate revolutionary candidates — if they had not been split five ways – would have allowed one of the candidates to advance to the second round, divisions within groups eliminated chances of an overall victory.
These divisions can also be observed in the dialogues between different civil society and parliamentary groups. Many new civil society groups were born out of the revolution, yet they remain heavily focused on making demands and claims, and they not fully acquired the skills of negotiation and compromise. Salma El-Naqqash, of Nazra Feminist Studies, notes in an interview the difficulties of opening a dialogue between Islamist groups and the women’s movements, due to polarization and mutual distrust between both sides.“I don’t want to go to talk to them” she said. Instead she prefers to strengthen the women’s movement, in the hope of gaining enough leverage to force Islamist groups to listen. These approaches to negotiation make compromise difficult; limiting the creation of connections between Egypt’s diverse social, political and religious groups.
Organisation of protests in response to the election results shows that popular mobilisation still plays a big role in realizing political demands. El-Naqqash reveals the mindset of the activist groups stating that if demands are not met, “There are going to be a lot of protests (and) mobilisation.” This suggests that for many politically engaged Egyptians, democratic elections are just one element of a wider range of tools for achieving political demands and social justice.
In this new democratic climate, groups with already organized networks have been better able to achieve political success. Yahia Zaied, Project Coordinator at Nazra Feminist Studies, worked extensively to support female parliamentary candidates. He notes the difficulties of building political skills and challenging more established players. The winners of the first round of the presidential elections have benefited from association with established organizations in Egypt. They have been able to rely on the votes of already loyal supporters as well as financial support. New candidates have had little time to build and organize in this way. This has had a direct effect on the elections, as revolutionary movements failed to communicate their objectives and vision to the wider Egyptian public during the campaign period. Yet, Zaied is optimistic about the future for new groups and new candidates. He argues that in any transitioning democracy, the first parliamentary and presidential elections are not necessarily representative, and new political forces need time to grow and build strong foundations for future elections. He is sure this is only the start.
A lack of organization is not the only obstacle preventing new political forces from performing well in elections. Organizing free and fair elections is critical to democratic development. Following polling in Egypt the Carter Council described the elections as “peaceful and orderly and marked by a sense of hope in Egypt’s struggle for democracy,” but qualified this generally positive assessment by noting that government restrictions had resulted in “a limited mission…unable to reach a conclusion about the process as a whole.” Many Egyptians are convinced that Shafik’s second place was not the result of a fair election.
There have been many claims of violations ranging from fraud, vote-rigging, discarded ballots, errors in voting lists, closure of polling stations. These irregularities evoke a past culture of corruption and hint at the remnants of the previous regime. They have also provided unsuccessful candidates with fuel enough to challenge the legitimacy of the election result. Nabil, a member of the April 6 Youth Movement, stated pessimistically, “Running election under SCAF supervision suggests nothing will or can change.”
As the contest of the presidential elections continues, it seems just one station on the long road to a fully realized culture of democracy in Egypt. This democratic culture is evolving and Egyptians are developing tools to operate effectively through under such a system. Yet remnants of the previous regime hang over this process, and while they do full democratic freedoms cannot be developed in Egypt.
Catriona Knapman is a researcher and writer focusing on human rights, legal and social development issues. Her professional experience spans a number of international organisations and continents. She is currently based in Cairo. She also blogs at: writingonrights.wordpress.com.
Photo Credit: BusinessWeek