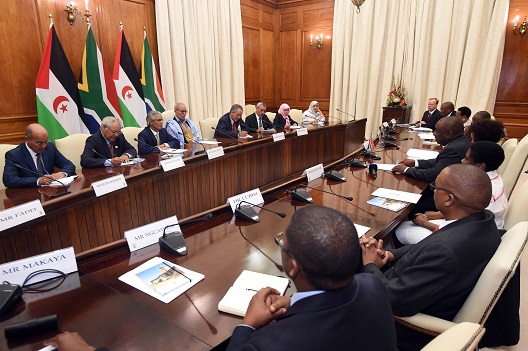 Morocco cut diplomatic ties with Iran on May 1, 2018 after allegations of Iranian meddling in the Western Sahara dispute. The Moroccan Minister of Foreign Affairs, Nasser Bourita, met with his Iranian counterpart, Mohammed Javad Zarif, in Tehran the following day to deliver a ‘secret dossier’ accusing Iran of aiding the separatist group Polisario Front in Western Sahara through its Embassy in Algeria, and positioning Hezbollah as a proxy. During his visit, Bourita revealed that a series of Iranian-mediated meetings took place between top Lebanese Hezbollah officials and Polisario representatives in the Sahrawi refugee camps in Algeria. Bourita went on to state that Hezbollah has smuggled weapons, including truck-mounted anti-aircraft missiles, and has provided military training to Polisario Front members.

Morocco’s recent allegations against Iran, Hezbollah, and by extension Algeria have not only escalated tensions between all parties, but also hindered the prospect of a peaceful resolution of the Western Sahara conflict, which recently entered its forty-third year. The dispute pits Morocco, which advocates for its Autonomy Plan for the Western Sahara, against the Algeria-backed Polisario Front, a non-state armed group seeking the independence of Western Sahara. This April, the United Nations Security Council passed Resolution 2414 extending the mandate of the MINURSO—the UN peacekeeping force monitoring the ceasefire agreement brokered in 1991—and calling for a peaceful settlement of the dispute. The resolution also calls on the Polisario Front to withdraw from the buffer zone, in response to the group’s recent incursion in the Guergerat area, and to refrain from taking any actions that could destabilize the region. However, Morocco’s recent claims against Iran and Hezbollah curtail the possibility of a near resolution of the conflict.

Tensions between Morocco and Iran over the Western Sahara dispute ignited in March 2017, when the Moroccan authorities arrested Lebanese Hezbollah financier Kassim Tajideen in Casablance, en route to Beirut from Guinea-Bissau. According to the US Treasury Department, Tajideen  provided funding for Hezbollah in cash bundles as large as $1 million. Following his arrest, he was extradited to the United States and prosecuted for terror-related charges. Tajideen’s arrest increased tensions between Hezbollah and Morocco, and some observers argue that it had the effect of drawing the Polisario Front and Hezbollah closer together. The groups had long been aware of each other and may have drawn inspiration from each other’s actions, as both are non-state actors conveying a political message against a perceived aggressor through asymmetrical warfare tactics. Their direct relationship appears to have begun in 2016, when Hezbollah formed a committee in Lebanon to support the people of Western Sahara.

Beyond the allegations of Hezbollah’s role, Morocco directly accuses Iran of destabilizing the Western Sahara region through its Embassy in Algiers.  Bourita points out that Iran’s Cultural Attaché in Algiers, Amir al Mussawi, assisted in smuggling Hezbollah weapons to the Polisario Front through Algeria. Al Mussawi previously held positions as Iran’s Vice-Minister of Defense and Director of the Iranian Center for Strategic Studies, a prominent research institution with close ties to the government. The Iranian diplomat has also been at the centerstage of a controversy in Algeria earlier this year, targeting the former Algerian First Lady, Anissa Boumediene. In a Facebook rant, al Mussawi criticized Boumediene for supporting an Iranian movement advocating regime-change in Iran.

A designed strategic tactic that further divides the Middle East

Morocco’s allegations were quickly denied by Iran, Hezbollah, Algeria, and representatives of the Polisario. In an official statement, Iranian Foreign Ministry spokesperson Bahram Qasimi declared that “Morocco has failed to provide any evidence to substantiate [these] allegations.” Hezbollah chief Hassan Nasrallah echoed the Iranian response by denying any relation between Hezbollah and the Polisario Front.

However, Tehran’s denial of interfering in Western Sahara is cast into doubt by its activities elsewhere in the Middle East. Iran uses its influence with its proxies to gain ground in Arab countries such as Syria and Iraq, where it explicitly demonstrates its ambition to counter Western powers. In Syria, Iran’s hands reach beyond the scope of weapons supply, reconstruction, and military advising and training, as Iran increasingly seeks to become a permanent power within Syria—an aim which threatens the alliance between Russia, Turkey, and Iran as well as the future stability of Syria. And Iran’s well-documented investment in Hezbollah as a powerful instrument to exercise foreign influence in the region continues to pose a substantial threat to the stability of the region.

Morocco has not yet provided visual proof substantiating its claims against Iran and Hezbollah, but the claims may not be entirely baseless, considering Iran’s growing ambitions in the region.  However, Rabat’s allegations occurred in timely circumstances, as the diplomatic severing with Iran followed the US administration’s decision to withdraw from the Iran nuclear deal. The increasingly hostile rhetoric of the US administration towards Tehran and the rapprochement of the United States with Gulf countries may have propelled Morocco, an Arab country, to pick a side. Morocco is mindful that backing the United States and its longstanding Gulf allies will eventually benefit its efforts to garner support at the United Nations for its Autonomy Plan in Western Sahara. Morocco may also seek to tie the Polisario Front to Hezbollah to cast it as a destabilizing actor unwilling to seek a peaceful settlement of the conflict and therefore an illegitimate party to negotiate with.

The Gulf countries welcomed Morocco’s decision to cut diplomatic ties with Iran—especially Saudi Arabia, as demonstrated by the Saudi Foreign Minister Adel bin Ahmed Al-Jubeir’s tweeting  his support for Morocco’s decision. Morocco seems determined to stand by its Gulf allies, with which it has historic relations, against Iran. Morocco is bound to side with Saudi Arabia in particular, as Crown Prince Mohammad bin Salman’s recent reforms align with Morocco’s policy ambitions. Whatever the reasons behind Morocco’s decision, this latest episode in the rift between Arab monarchies and Iran further exacerbates the divide in the Middle East and reinforces the prospect of large-scale sectarian conflict.

Mariam Elatouabi is a Youth Delegate at the United Nations and chairwoman of ‘Josoor’ an NGO in the MENA region advocating for dialogue and cooperation in the Middle East through youth empowerment. She tweets @MariamElat.