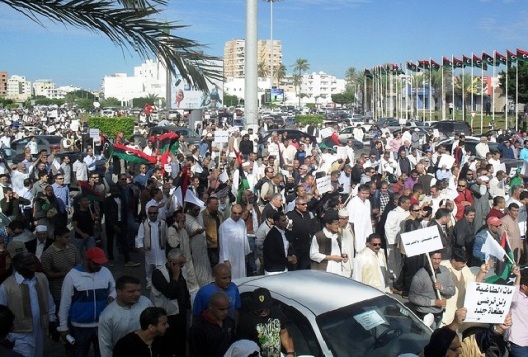 More than two years since Libyans and international forces overthrew longtime dictator Muammar Qaddafi, Libya suffers from fragmentation as competing forces vie to fill the power vacuum. An emerging and worrying trend of political blocs within the General National Congress (GNC) forming alliances with certain militia groups—creating new and divisive power centers—threatens to derail the transition as these power centers prioritize self-interest over the collective good.

The injection of weapons onto the political scene not only hampers substantive efforts to build a new Libyan state, but also emboldens criminal elements and political factions with parochial interests.

In the uncertainty that is Libya, mediators in recent weeks attempted to broker a deal between the various blocs present in Libya’s political landscape to help diffuse tensions and restart the political process. Efforts to broker an agreement that would create an opening for nascent institutions overcome this stumbling block have now collapsed. The elements of the plan included the following:

The goal was to have every GNC member sign a pledge upholding these principles. It appears that the two major political blocs—the Muslim Brotherhood-affiliated Justice and Construction Party and Mahmoud Jibril’s National Forces Alliance (NFA)—agreed. Given the fragmented, multi-polarity that characterizes Libyan politics today, however, the proposed solution collapsed after its rejection by, most notably, the al-Wafa Islamist bloc led by Abdulwahab al-Qaid. Al-Wafa rebuffed the proposal on the grounds that it was negotiated by political groups—not the elected members of the legislature—and therefore was nonbinding to the GNC. This development echoes the growing tendency by individual elected politicians to see themselves as institutions in and of themselves and override their party platforms, increasing the distance between them and the constituencies they should represent.

Such an agreement would have served to shake Libya’s institutions out of paralysis and entrenched polarization until a new constitution could rekindle momentum for the country’s democratic transition. In light of its failure, tensions are rising as the GNC’s expiration date of February 7 approaches, and its effect remains unclear: whether the Libyan streets are feeling anger or apathy, and how those sentiments may manifest themselves in the coming days.

As Libyans and Libya observers wait with bated breath for what might develop in the coming days and weeks, there are two clear points: first, Libya’s political promise deteriorates as rivalries continue to deepen. The situation is exacerbated by the reality of loose alliances between the political blocs and proliferating militias. Zintanis militias, which have so far reluctantly stood by the government, already pledged to side with the people if it takes an aggressive stance against the GNC. Meanwhile, Misratan militias, who withdrew from the capital amid widespread condemnation following the fatal clashes in Ghargour in November 2013, have promised to return to Tripoli if need be to defend the legislature and the revolution. Out of public view, Prime Minister Ali Zidan manipulates the factions gripping the legislature to maintain a hold on power, despite growing pressure from external forces urging a “no confidence” vote to oust his administration.

Second, the current political paralysis, if unresolved, will result in a chaotic free-for-all, with rogue elements as the only actors that stand to gain from such an outcome. From jihadi groups to gangsters to federalist elements such as those led by self-styled leader Ibrahim Jadhran, centrifugal forces are eagerly waiting for the opportunity to seize whatever power they can. Their success would directly result from a failure of leadership in Tripoli.

The political maneuverings and armed alliances are surely an explosive mix. Libya’s leaders must look to prioritize the collective good and implement popular will. Without a unified vision of a free Libya, the slightest spark could derail the country’s already delicate and feeble transition to democracy, potentially threatening stability in Libya and across the region.

Karim Mezran is a resident senior fellow with the Council’s Rafik Hariri Center for the Middle East focusing on the processes of change in North Africa. He is currently reporting from Italy and Libya researching the latest developments in Libya’s transition.